The tale of the two friends — one a dropout, one joyfully resuming her education – is also the tale of millions of Uganda’s children as many went back to classes on Monday after a nearly two-year shutdown of schools induced by Covid-19.

The easing of inflation pressures is giving the economy some breathing room, for now

Rescuers to move whale stranded in French river to saltwater

The shutdown in the east African country was the longest disruption of educational institutions globally due to the coronavirus pandemic, according to the United Nations.

“I am excited that I am going back to school. It has not been easy for me to keep safe at home for this long but I thank God, who has kept me safe,” 16-year-old Rachael told Reuters.

“I have all along longed to go back to school so that I can achieve my dream career of becoming an accountant.”

But Ugandan officials expect a third of children who were in school when the pandemic began will not return, which could prove a heavy blow to the future prospects of the new generation in a country with one of the world’s youngest populations and already struggling with high unemployment and poverty.

Ugandan authorities base their projection on the widespread incidence of children having to work to help their families make ends meet, as well as teenage pregnancies and marriage.

Rachael’s friend Fridah was not among the crowds of young students flocking back to classes on Monday.

Fridah was Rachael’s age when classes closed. Though she loved biology and chemistry and dreamt of becoming a doctor, she said she “buried” that dream to help support her family by finding a job. Uganda’s strict Covid-19 lockdown pushed many families deeper into poverty as people working odd jobs were left without income.

Now Fridah fears for her future.

“I am worried as a girl. Without being in school I might be tempted to get married,” she said as she waited tables.

“I am here working but I know my friends right now are going back to school or preparing to. That thought sucks the energy out of me. I feel some despair and anger.” 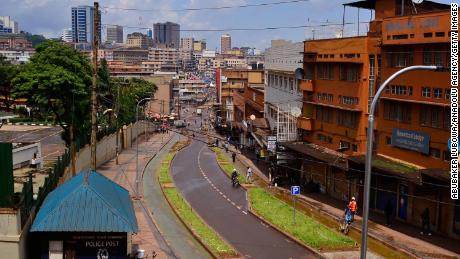 Another 16-year-old in the town of Kayunga, 65 km (40 miles)northeast of the capital Kampala, told Reuters she fell prey to the same temptation while schools were shuttered.

Sara Nakafero said she was bored and stuck at home when she was lured by an older man into a relationship.

Weeks later, her grandmother forced her to take a pregnancy test. She said she spent her pregnancy crying frequently.

The petite teenager now avoids leaving her grandmother’s home with her three-month-old infant Sumin due to prying neighbors. “People stare at me…Whenever I walk around or when I go for immunization, people ask me, ‘Is this child really yours?’,” Nakafero said.

“I feel embarrassed. I feel anger.”

The school closures, alongside other strict measures to stem the spread of the virus, helped keep the number of Covid-19 deaths low in Uganda. The country has so far recorded around 153,000 cases of Covid-19 and about 3,300 deaths.

But the United Nations children’s agency UNICEF says the shutdown was too long and costly for Uganda’s young.

“Millions of children are at the risk of losing the right to education,” said Munir Safieldin, UNICEF’s Uganda country representative. He cited a state planning authority projection that a third of students would never return to school.

The easing of inflation pressures is giving the economy some breathing room, for now

Rescuers to move whale stranded in French river to saltwater

German diplomat arrested in Brazil for alleged murder of husband

Indigenous Women at the Forefront of Transformational Change — Global Issues

PDF to Excel conversion: Your ultimate guide to the best tools