Kazakhstan Is Facing Its Most Dramatic Political Upheaval in 30 Years. Here’s What to Know

Dozens of protesters and 12 police officers have died amid violent clashes across Kazakhstan, in the most dramatic political upheaval in the country since the fall of the Soviet Union. Protests that were initially triggered by increased fuel prices have since become anti-government demonstrations, and prompted Russian intervention.

A Russia-led security bloc said it would send troops to support President Kassym-Jomart Tokayev, while the Kazakh government has resigned. Here’s how the unrest unfolded in the Central Asian country.

Protests began Jan. 2, a day after the Kazakh government lifted a cap on fuel prices, which led to the price of the country’s most popular gas doubling. The demonstrations quickly spread across regions, including the country’s largest city Almaty, and have come to represent other political grievances.
[time-brightcove not-tgx=”true”]

Abduaziz Madyarov—AFP/Getty ImagesProtesters take part in a rally over a hike in energy prices in Almaty, Kazakhstan, on Jan. 5, 2022.

The protests escalated to violent clashes between demonstrators and the police. A state of emergency was declared Jan. 5 after the President’s Almaty residence was surrounded by thousands of protesters and engulfed in flames, according to a Russian news agency. Tokayev appealed for intervention from the Collective Security Treaty Organization (CSTO), a Russia-led alliance of countries including Armenia, Belarus, Kyrgyzstan and Tajikistan. Russian paramilitary troops are currently being deployed, according to reports.

The full scale of the bloodshed is still unclear, but Kazakh security forces confirmed that dozens of protestors and 12 police officers were killed.

Why are people protesting?

The demonstrators are seeking widespread reform of a state many see as marred by corruption, poverty, and inequality. Much of the anger is directed at both Tokayev and his mentor Nursultan Nazarbayev, who was President of Kazakhstan from 1991 until 2019 and previously served as head of the Kazakh Soviet Republic. He has remained a powerful figure in government since leaving office.

Having been ruled by the same party since the country’s independence from the USSR in 1991, Kazakhstan is often described as an authoritarian state. Tightly controlled press and social media shutdowns are common tactics used by the government to control dissent.

Given the lack of effective political opposition, mass protest is seen by many as the only tool to voice dissent. However, the demonstrations are largely uncoordinated and lack leadership.

Formerly part of the Soviet bloc, oil-producing Kazakhstan has experienced relative stability compared with other Central Asian countries. The mainly Muslim state has a large Russian minority population, bordering Russia to the north and China to the east.

How has the state responded?

In a bid to calm the protests, Tokayev fired his unpopular predecessor from his role as head of Kazakhstan’s security council and accepted the resignation of his entire government. A nationwide state of emergency, which limits movement and mass gatherings, was declared Jan. 5. The following day the fuel price cap was reinstated for six months.

Despite these moves, protesters continued to come out in their thousands to display their opposition to the government, facing tear gas and stun grenades from the police. ​​The bloody crackdown has resulted in around 1,000 casualties in Almaty and dozens of deaths. Due to the government-imposed nationwide internet blackout, it is difficult to gauge exact figures. 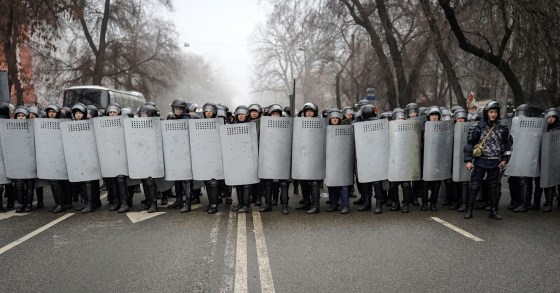 STR/EPA-EFE/Shutterstock Riot police officers patrol in a street during rally over a hike in energy prices in Almaty, Kazakhstan, Jan. 5, 2022.

Almaty police spokeswoman Saltanat Azirbek said that dozens of attackers were “eliminated” after they tried to storm police buildings in the city. She echoed President Tokayev’s as she described the police operation against demonstrators as “counter-terrorist.” Tokayev previously placed responsibility for the protests on foreign-trained “terrorist organizations.“ 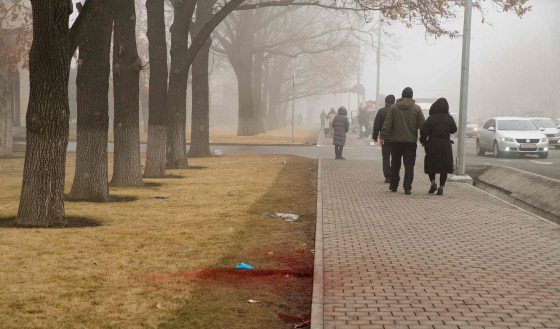 Alexander Bogdanov— AFP/Getty ImagesPeople walk past blood on a curbside lawn after violence that erupted following protests over hikes in fuel prices, in Almaty, Kazakhstan on Jan. 6, 2022.

How is Russia involved?

Tokayev called on intervention from the CSTO on Jan. 5, claiming that the “terrorist threat” was “undermining the integrity of the state.” The alliance began dispatching Russian paratroopers to the country soon after.

Kazakhstan is a close ally of Russia, which keeps a close eye on political unrest in former Soviet states. Russia’s intervention comes amid mounting tension in Ukraine, where increased Russian military presence at its borders is viewed as the Kremlin’s response to plans to include Ukraine in the NATO military alliance. 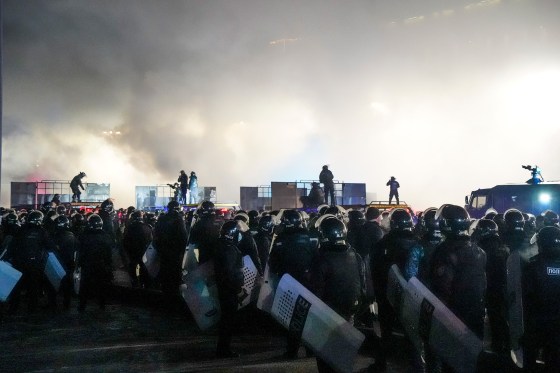 Despite the fuel cap reintroduction and other measures to subdue protesters, there is currently no sign of their anger abating and thousands continue to defy the government’s state of emergency.

The unrest has meant citizens are struggling to buy food as major shops, supermarkets, and restaurants closed. As the internet shutdown continues, Kazakhs cannot withdraw money or top up their phones, according to a BBC report.

In a press conference Jan. 5, the White House press secretary Jen Psaki dismissed “crazy Russian claims” that the U.S. played a role in the unrest.

“We’re monitoring reports of protests in Kazakhstan,” Psaki said. “We support calls for calm, for protesters to express themselves peacefully and for authorities to exercise restraint.”

These are the Best Baking Substitutes for Every Recipe!