The Volatiles Investigating Polar Exploration Rover dubbed VIPER is headed to the moon’s south pole in late 2023 to search for resources that could sustain future human settlements in space. The NASA rover will travel to areas of the lunar surface that have never seen sunlight to map and analyze concentrations of water ice in near real-time. The distribution and availability of water could have big implications for NASA’s Artemis program, which has the goal of returning humans to the moon by 2024.

“It’s kind of mind-blowing when you think about the fact that we’ve got rovers going all over Mars and we have never sent a rover to the moon,” says Tracy Gregg, a planetary volcanologist at University at Buffalo College. “We sort of skipped over that part—we sent landers and then we sent astronauts with a dune buggy.”

In September, NASA announced that VIPER will touch down just west of Nobile, a crater near the moon’s south pole chosen for its terrain and potential for hosting water. To prepare for that occasion, here are five things you should know about NASA’s first lunar rover:

VIPER’s Main Purpose Is to Search for Water A data visualization showing the mountainous area west of Nobile Crater and the smaller craters near its rim at the lunar South Pole that the rover will explore.

Scientists already know that frozen water is trapped at the moon’s south pole from remote sensing data. The Lunar Crater Observation and Sensing Satellite confirmed the presence of water ice at the moon’s south pole in 2009. But exactly where that water is and how it got there remain a mystery. The rover’s meter-long drill will offer an in-depth look at lunar soil that scientists have been limited to assessing remotely. “To really get at the heart of some of these questions, we need to get to the surface,” says Anthony Colaprete, VIPER’s project scientist at NASA’s Ames Research Center. “That’s where the VIPER rover comes in.”

Water is a critical resource not just for human consumption, but for space exploration. Water can buffer humans from radiation and can be used to make rocket fuel and breathable oxygen. “If there’s a way to avoid shipping water through the solar system, and instead find water where you are, suddenly space travel and having humans on the moon for extended periods of time becomes feasible,” says Gregg. She notes that launching a Mars-bound rocket from the moon rather than from Earth is potentially cheaper because the effort would require a fraction of the fuel, but it would only be possible if the moon had enough water.

Based on remote sensing data, NASA suspects the moon’s soils could contain hundreds of millions of gallons of frozen water. Scientists think it’s unlikely the rover will find water ice in large chunks or sheets like those found on Earth. Instead, water will likely be in small fragments within the lunar dust. “If the water is literally frozen onto the outside of these lunar dust particles, that’s fairly accessible,” says Gregg. “You shovel it into a heater, and the water melts and you collect the water and the and the dirt is left behind. What’s harder would be if the water is more chemically bound to the lunar materials, and then it’s not just a matter of an oven, then you’ve actually got to do chemistry.” That doesn’t mean water will be impossible to access—it will just be more costly and time consuming to obtain.

VIPER’s primary goal is to assess what resources the moon can provide for future missions, but the characteristics of the moon’s polar water could even provide insight into the presence of the water on Earth and elsewhere in the inner solar system. The rover’s samples could help identify the origin of the moon’s water, which may have arrived on an asteroid or comet before getting trapped in icy shadows.

“I don’t know what we’re going to find yet,” says Colaprete. “We go into these things as best we can with our eyes wide open because we will learn things we did not anticipate.” 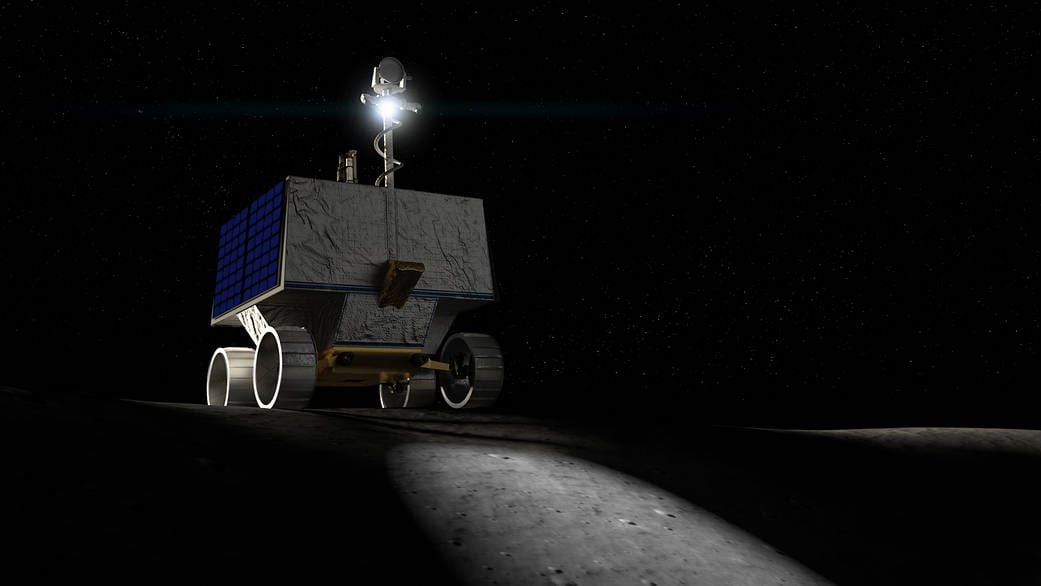 An artist’s concept of VIPER using its headlights to enter a permanently shadowed crater on the moon.

The rover will look for frozen water ice in the only place the substance could survive on the moon: places where the sun never shines. The moon’s axis has only a slight tilt compared to Earth’s, which means the sun doesn’t rise as high on the horizon and leaves basins of craters in a permanent shadow. Because the moon lacks the Earth’s insulating atmosphere, surface temperatures reach a sweltering 225 degrees Fahrenheit during the day. At night and in permanently shadowed areas, the lunar surface drops to -400 degrees Fahrenheit, making the moon’s polar craters some of the coldest places in the universe.

“If the ice is there, and it’s there in any quantity, that’s the likely place you’re going to find it,” says Thomas Watters, senior scientist at the Smithsonian National Air and Space Museum. Any water deposited on the moon by an asteroid impact, for example, would have immediately evaporated in the sunlight. Only water that settled in sunless crater basins would survive in these cold traps. VIPER’s components are designed to withstand extreme temperatures, but the rover must run heaters to stay warm enough to function in shadowed areas. Unlike Perseverance and other nuclear-powered robots, VIPER will have to stay warm using energy generated from solar panels alone.

“Going into the unknown for the first time, so many unknown questions will be answered,” says Colaprete. “That moment that we go into that dark crater that’s never seen the light of day 3 billion years or so…that’s what I’m most excited for.”

VIPER Has Custom-Made Tools for the Moon VIPER’s components must be thoroughly tested to prove they can withstand the moon’s extreme temperatures.

VIPER will spend part of its time soaking up the energy from its three solar panels, and part of its time using headlights to navigate the craters of the south pole. The rover must maintain enough power to venture into dark craters and to make it back to sunlight before it dies.

Because VIPER is “going to a place that is unlike anything we’ve explored before,” says Colaprete, “the rover is quite distinct.” The moon’s crater-pocked landscape poses a challenge to the golf-cart-sized rover, which can comfortably cruise a slope of up to 15 degrees and handle a slope of 25 or 30 degrees when necessary. VIPER’s onboard cameras will help rover operators avoid rocks and other hazards, in addition to capturing images of the lunar surface. The mobile robot has four independently controlled wheels, those solar panels and that meter-long drill that will cut samples of lunar soil to be analyzed by onboard spectrometers.

The neutron spectrometer is “kind of like the bloodhound” of the rover, explains Colaprete. It can sense neutrons leaking out of the soil as the robot cruises the landscape—and can pick up on hydrogen atoms as deep as one meter, which could be an indication of water. The near-infrared spectrometer assesses minute changes in the color of lights from the lunar surface, which could also reveal the presence of water or other volatile compounds. VIPER’s mass spectrometer measures gases released from the moon’s surface, which could be kicked up by the rover as it agitates the moon’s top layer of soil.

VIPER Will Hibernate to Survive When the moon’s south pole rotates away from Earth’s view, which happens for two weeks of every month, the rover must wait in a “safe haven.”

Because no satellites that could be used to relay communications to Earth orbit the Moon, VIPER needs a direct-to-Earth radio link. That means the rover needs to avoid large landscape features like high mountains or steep crater rims which would block the communication signal. And when the moon’s south pole rotates away from view, which happens for two weeks of every month, the rover must wait out in an identified “safe haven” location until communication can resume.

These safe havens are particularly secure, sunny spots so that the rover can glean enough energy to survive stretches of darkness. VIPER needs regular access to sunlight, as it can’t survive more than 72 hours of continuous darkness. Often, the safe havens are elevated areas where slices of sunlight can reach the rover for the maximum time possible. While parked in such a location, “most of the time the rover is just sitting there in the sun, basking, just relaxing,” says Colaprete. When darkness descends and temperatures drop, the rover shifts into hibernation, using just enough power to keep warm and stay alive.

The mission is scheduled during the summer season on the moon’s south pole to maximize periods of life-giving daylight. NASA hopes to get 100 days out of the mission, which will span November 2023 through March of 2024. As the summer draws to a close on the moon, periods of darkness will grow longer and longer until VIPER can no longer generate enough power to survive.

VIPER Will Rove in Near Real-Time Unlike rovers on Mars missions, VIPER will operate close to Earth, allowing quicker communication. Rovers on Mars took up to 20 minutes to send commands to Earth, while VIPER’s latency will be a mere 6 to 10 seconds.

“The travel time between issuing commands from Earth and the rover receiving that command is just a couple of seconds—think about a laggy cell phone call,” says Gregg. “It’s going to be like a video game, almost, being able to drive this thing and react almost immediately to the data and to what you see on the surface.”

Mars rovers carry out a series of pre-planned commands alone on the planetary surface, while VIPER operators stop, move and reorient the rover every 15 feet depending on what they see via the rover’s cameras. As soon as the lunar rover samples are analyzed in an area, NASA scientists can decide within minutes about where to drill next. “It allows us to react and plan and optimize our observations in ways that we wouldn’t learn much usually done over a much longer period of time for example with Mars rovers,” says Colaprete. “That’s a really unique and exciting aspect of this mission.”

How Mail-Order Abortion Could Circumvent the Texas Law

Coldplay Blasts to No. 1 In U.K. With ‘Music Of The Spheres’

Global Energy Markets and the Impact on National Security