Alexa, when are we arriving at the moon?

Putting Amazon’s AI-enabled voice assistant on a moon-bound spaceship may sound like science fiction (hello, HAL!). But it’s due to become science fact later this year when a radiation-hardened console rides along in NASA’s Orion deep-space capsule for the Artemis 1 round-the-moon mission.

There’ll be no humans aboard for the test flight, which will mark the first launch of NASA’s heavy-lift Space Launch System rocket. Instead, Alexa’s voice, and Echo’s pulsing blue ring, will be interacting with operators at Houston’s Mission Control for a technology demonstration created by Lockheed Martin, Amazon and Cisco.

The project is known as Callisto — a name that pays tribute to the mythological nymph who was a follower of the Greek goddess Artemis.

“Callisto will demonstrate a first-of-its-kind technology that could be used in the future to enable astronauts to be more self-reliant as they explore deep space,” Lisa Callahan, Lockheed Martin’s vice president and general manager of commercial civil space, said today in a news release.

Including Alexa on the mission is particularly meaningful for Aaron Rubenson, vice president of Amazon Alexa. “The Star Trek computer was actually a key part of the original inspiration for Alexa — this notion of an ambient intelligence that is there when you need it … but then also fades into the background when you don’t need it,” he said during a teleconference.

A little more than seven years after Alexa made its debut, it’s finally getting off this rock. “We envision a future where astronauts could turn to an onboard AI for access to information, for assistance in doing their job, making their job simpler and more efficient, and ultimately for some form of companionship,” Rubenson said.

With guidance from Lockheed Martin, the prime contractor for the Orion spacecraft, Amazon tweaked the Echo hardware to be more resilient to radiation in the space environment, and tweaked the Alexa software to be more attuned to voice commands in a capsule that can get noisier than your typical living room.

Callisto also has a tablet-based version of Cisco’s Webex videoconferencing system built in, with a whiteboarding feature that could come in handy for collaboration between Orion’s future crews and ground controllers.

The in-space version of Alexa takes advantage of the platform’s ability to support voice interactions even if the spacecraft is out of communication with the ground. Local voice control means crews in lunar orbit won’t always have to deal with the two-second communication gaps that Apollo astronauts experienced.

“These are the all the sorts of challenges that we’ve been working through to make this demonstration possible,” Rubenson said. “From a capability standpoint, we’ve also added thousands of new interactions that Alexa can process that are relevant to space and to the mission.”

Artemis 1 is due for launch from NASA’s Kennedy Space Center in Florida in the March-April time frame, with Callisto installed at the front of the Orion crew cabin.

The team recently conducted an end-to-end communications test to work out the bugs. “We had a couple of hiccups, but then we corrected those, and it was great,” said Rob Chambers, Lockheed Martin Space Systems’ director of human spaceflight strategy and business development. 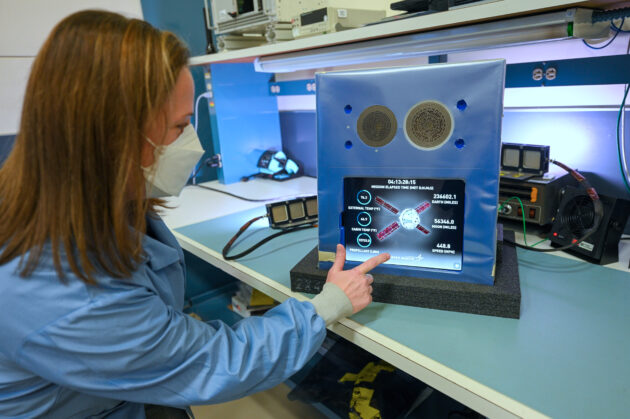 A team of virtual astronauts at Mission Control will put Callisto through its paces over the course of the weeks-long mission, which is due to range beyond lunar orbit. The tests will include streaming 720p HD video, sharing a whiteboard, getting readings on spacecraft telemetry and controlling the cabin lights.

“We could imagine in the future potentially extending that to other types of devices,” Rubenson said. “Maybe it’s controlling camera views, or controlling the configurations of the screens. … For this first demonstration, we’ve just focused on the lights as a proof of concept, and then one additional capability that we built.”

Rubenson said the in-space version of Alexa will be capable of checking its earthly data banks for the latest news or sports scores. “We think this feature is very important, because if we are trying to help astronauts combat the isolation that’s part of a multiweek mission like this, being able to bring some of the daily routine into the spacecraft could be valuable,” he said.

Jeetu Patel, Cisco’s executive vice president and general manager of security and collaboration, said Callisto had to satisfy NASA’s standards for security and reliability. The last thing you’d want is for Alexa to drop out at a critical moment, or to be held hostage by hackers.

“Making sure there’s a level of adherence to security and privacy, while ensuring that there’s reliability on the connectivity side in space, is a non-trivial task,” Patel said.

Chambers said Lockheed Martin came up with the idea behind Callisto years ago and suggested it to NASA. “As you know, we’ve built a few aircraft in our day, and no aircraft comes off the line these days without voice,” he said. “The fact that we built spacecraft without voice, we thought, was kind of weird.”

NASA gave the go-ahead for the project, and Lockheed Martin hooked up with Amazon and Cisco to turn the idea into reality. The three companies are splitting the cost of development and compensating NASA for the space agency’s costs. No taxpayer funds are involved, Chambers said. 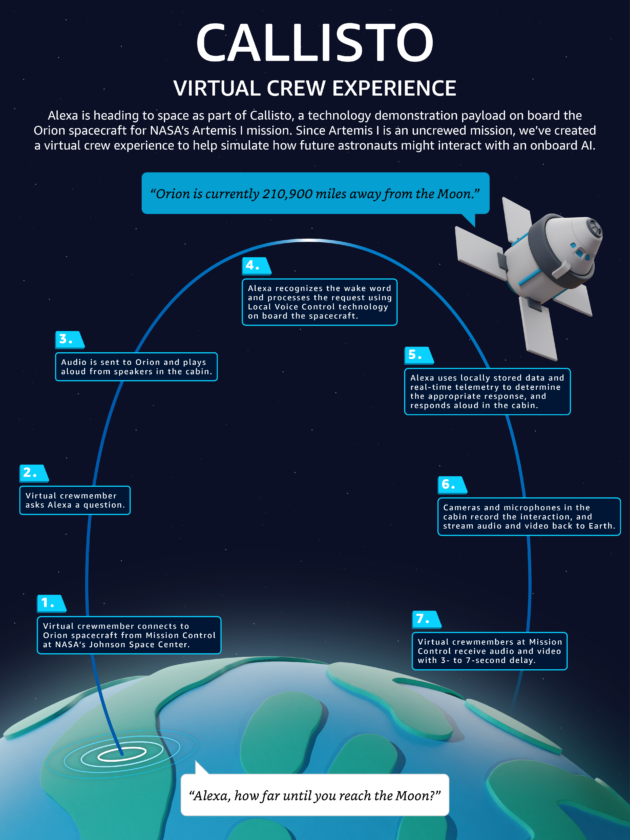 This infographic traces the procedure for virtual crew interactions with Callisto. Click on the image for a larger version. (Amazon Alexa Graphic)

For now, there’s no commitment from NASA to include Callisto on the crewed flights it’s planning — such as the Artemis 2 round-the-moon mission that’s scheduled for 2024, or the Artemis 3 moon landing that’s set for no earlier than 2025. But all three companies hope that Callisto will find its way aboard future spacecraft.

“We’re really looking to demonstrate something that would be of value to NASA and other space agencies, certainly all the commercial space players,” Chambers said.

“If you think about some of the hardening we’ve had to do around vibration, and the ability to handle queries without connectivity, those are relevant for the work we do, for example, in Alexa-enabled cars,” he said.

Callisto could provide a teachable moment for the next generation of scientists, engineers and explorers: Amazon, for instance, is making more information about the Artemis 1 mission accessible via Alexa-enabled devices. The company is also rolling out a new Amazon Future Engineer program called Alexa for Astronauts, which will offer live virtual tours from NASA’s Johnson Space Center as well as curriculum materials keyed to Artemis 1.

To get a preview of Alexa’s Artemis offerings, and to set up reminders for upcoming mission milestones, users can say, “Alexa, take me to the moon.” But whatever you do, don’t ask Alexa to open the pod bay doors.

8 Online Business Growth Metrics and KPIs You Should Track

The 10 wildest things we learned about black holes in 2021