Moen revealed its latest smart faucet at CES this week: the Moen Smart Faucet with Motion Control. The new feature adds completely handle-free operation, using gestures to control temperature as well as flow. But you can still have a handle if you really want one.

The idea is you operate the faucet using swipe and push motions in front of the sensor to get hot, warm, or cold water. The Moen Smart Water App should let you set the default temperatures, as well as customize the gestures further.

The handle-free design of the Moen Smart Faucet with Motion is a minimalist’s dream.

The new faucet has all the features of the existing Moen Smart Faucet — including voice activation (with Amazon Alexa and Google Assistant). There’s also the ability to dispense precise measurements and temperatures — so you can ask for one cup of 100-degree water, as well as set presets for common commands (such as the right temperature and volume to fill your coffee pot versus your water bottle).

There are two handle-free styles at launch and four options that feature the more traditional control option as well. Pricing starts at $675 and varies based on style and finish, and it will be available to buy in April 2022. 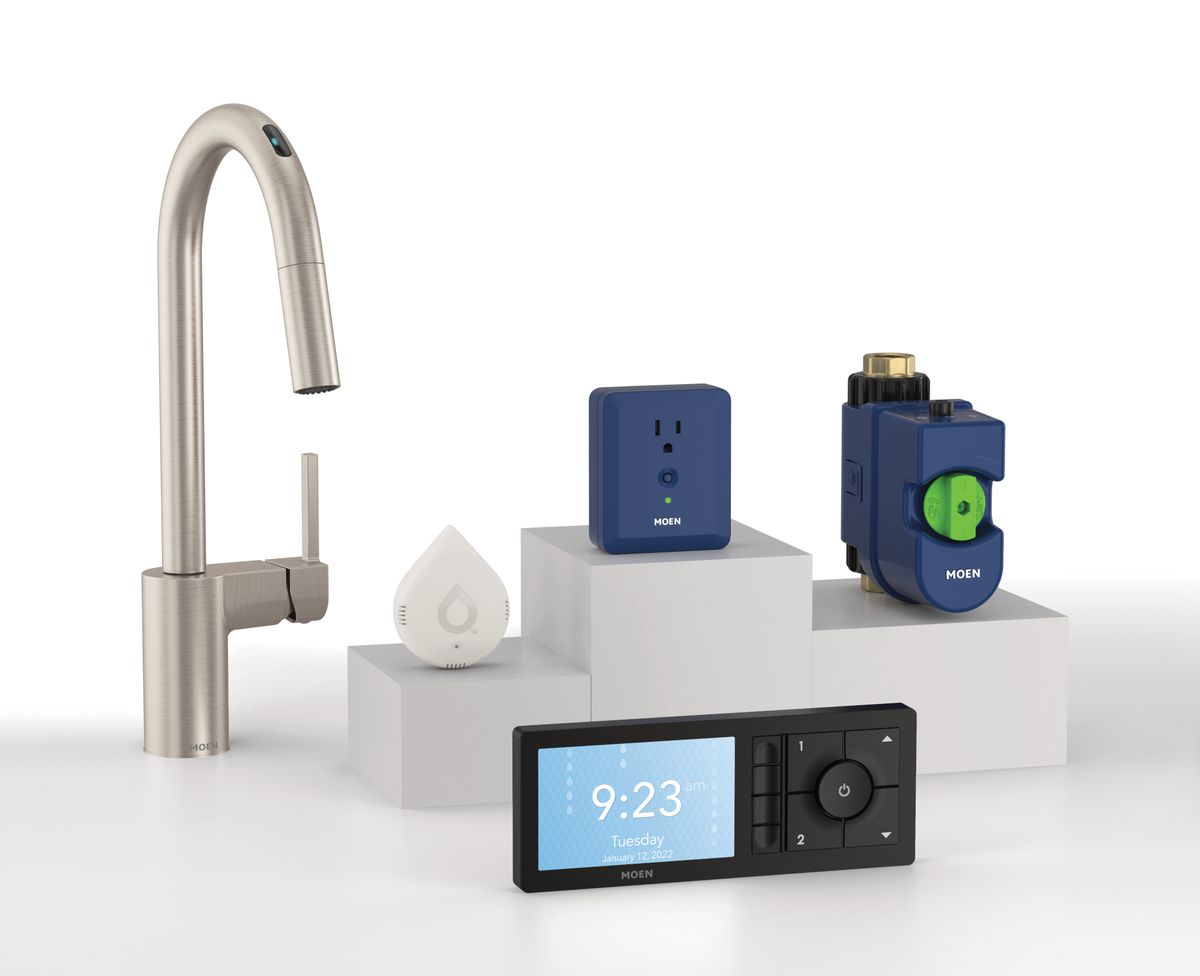 If a house has the smart water monitor and a Moen faucet and / or smart shower installed, the devices should soon be able to communicate with each other to help winterize the system and prevent burst pipes by flushing the water lines.

The Smart Water Monitor installs on a home’s main water supply line and monitors the water flow, pressure, and temperature to notify you of leaks, burst pipes, and other potential issues.

When paired with the other Moen products and controlled by the Moen Smart Water app, a homeowner is supposed to be able to tell the system to winterize itself by shutting off water coming into the home and purging the water line via the faucet and shower. When it’s time to get the pipes flowing again, a Health Protect feature should flush the water lines to prevent dirt, debris, or germs from building up in the line.

The system also has a built-in freeze protection feature. When it senses high pressure or low temperatures that could cause a pipe to burst, it can automatically shut off water to the home via the Flo Smart Water Monitor and Shutoff, then purge the water line using the Moen faucet and shower.

This type of integration currently requires a substantial investment in products from one company, but the whole home approach to protecting and monitoring essential infrastructure in a house is a key part of the possible future of the smart home.

Someone Proved the Nintendo Game Boy Can Stream Movies

How Forspoken fuses fast-paced spellcasting and magic-imbued parkour for its combat thrills – PlayStation.Blog