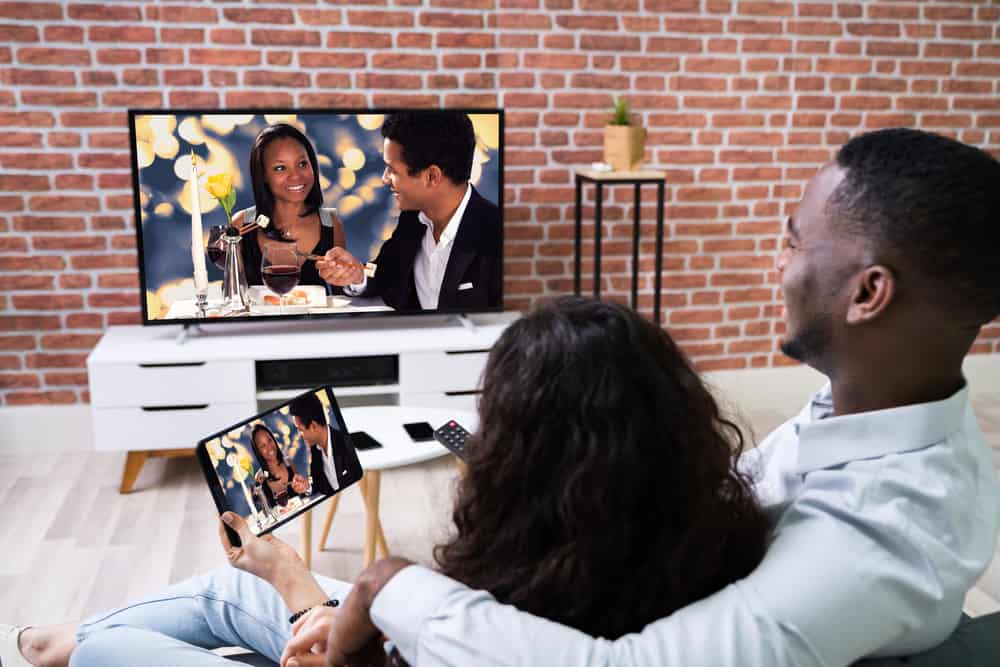 The LG 75UM6970PUB is an expensive smart TV that offers somewhat average performance. Moreover, this television features a 4K display that has a decent picture quality. However, this TV doesn’t produce great sound and its display isn’t bright enough.

Are you looking to purchase a 75-inch smart television? If yes, then you should check out this LG 75UM6970PUB review.

This review covers practically every aspect concerning the LG 75UM6970PUB TV. Hence, I will discuss the television’s features such as design, display, sound, ports and connectivity, and smart features.

Furthermore, since this review aims at analyzing the TV’s performance, you will get to know the pros and cons of the television. Also, in some sections of this review, I will be comparing the LG 75UM6970PUB with competing TVs.

I urge you to read this review to the end so as to know if this TV really meets your requirements. 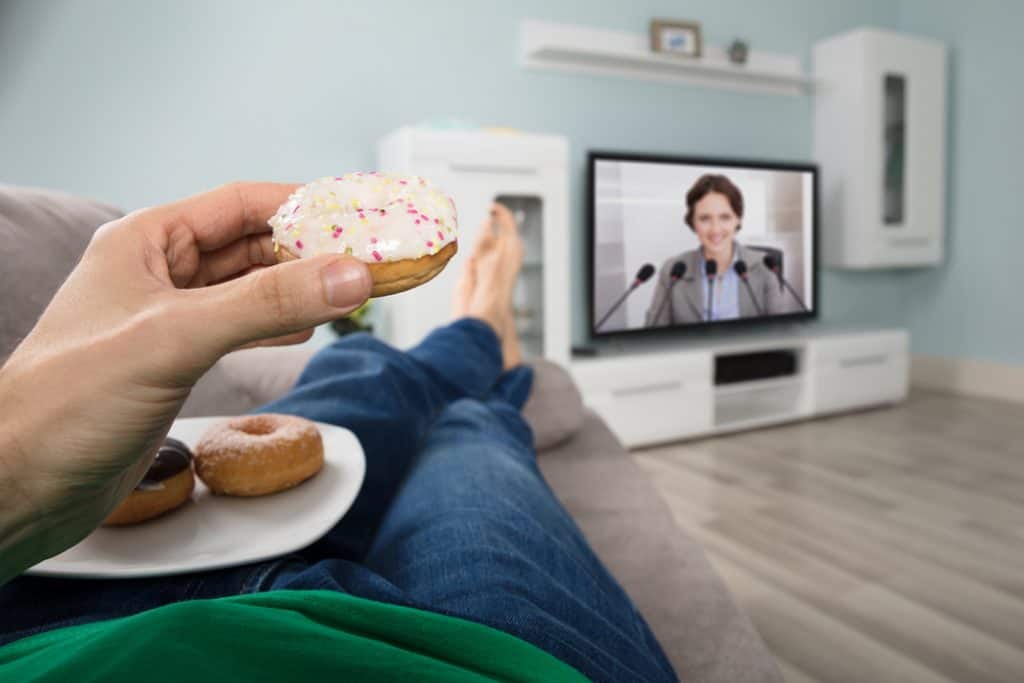 Among the existing TV brands, LG has stood out by consistently producing quality televisions. In 2019, LG released the 75UM6970PUB TV to continue with its tradition of delivering TVs with impressive picture quality.

However, with great features comes a great price. To be more specific, this TV comes with an expensive price tag of $2,825.99 when I wrote this article in December 2021.

Does the LG 75UM6970PUB really worth this massive price tag? We will find out in subsequent sections below. 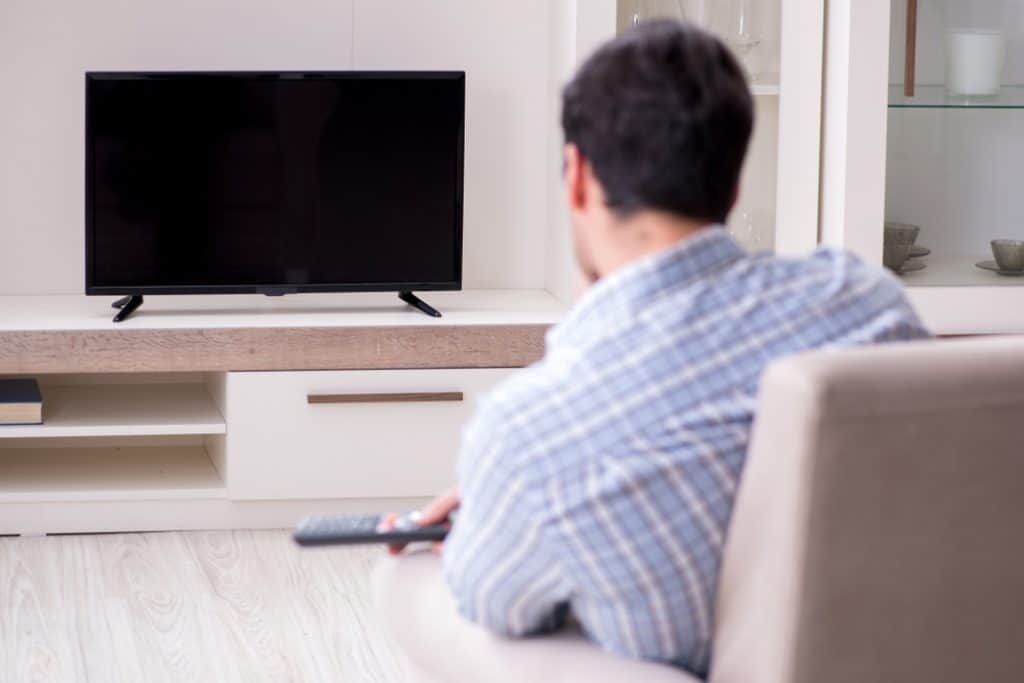 Design-wise, the LG 75UM6970PUB looks very simple and elegant at the same time. Moreover, its design is somewhat similar to that of the LG UM7300.

The major difference between them is that the LG UM7300 is more stylish. However, the LG 75UM6970PUB features thinner bezels that surround its display screen.

To give more details, the LG 75UM6970PUB’s bezels have a matte black finish that makes it look kind of attractive. Also, there is an LG logo at the center of the bottom bezel that adds more style to the TV’s design.

Furthermore, just like most parts of the television, the LG 75UM6970PUB’s bezels are made of plastic.

Moving on to the back of the TV, you will notice a black high-quality plastic panel. This back panel features a very plain texture but it doesn’t have any form of cable management.

On the bright side, the back panel features holes for a 300 x 300 millimeter VESA mount for wall-mounting the TV. Also, the back panel of the LG 75UM6970PUB isn’t thick at all.

Thus, the TV won’t bulge out of the wall or look awkward if wall-mounted. However, if you do not wish to wall-mount LG 75UM6970PUB, it comes with a pair of legs.

These legs are also made of plastic and they feature a black finish. However, they are placed very close to the edges of the television.

Thus, if you aren’t wall-mounting the LG 75UM6970PUB, you have to place it on a fairly lag table to avoid issues. 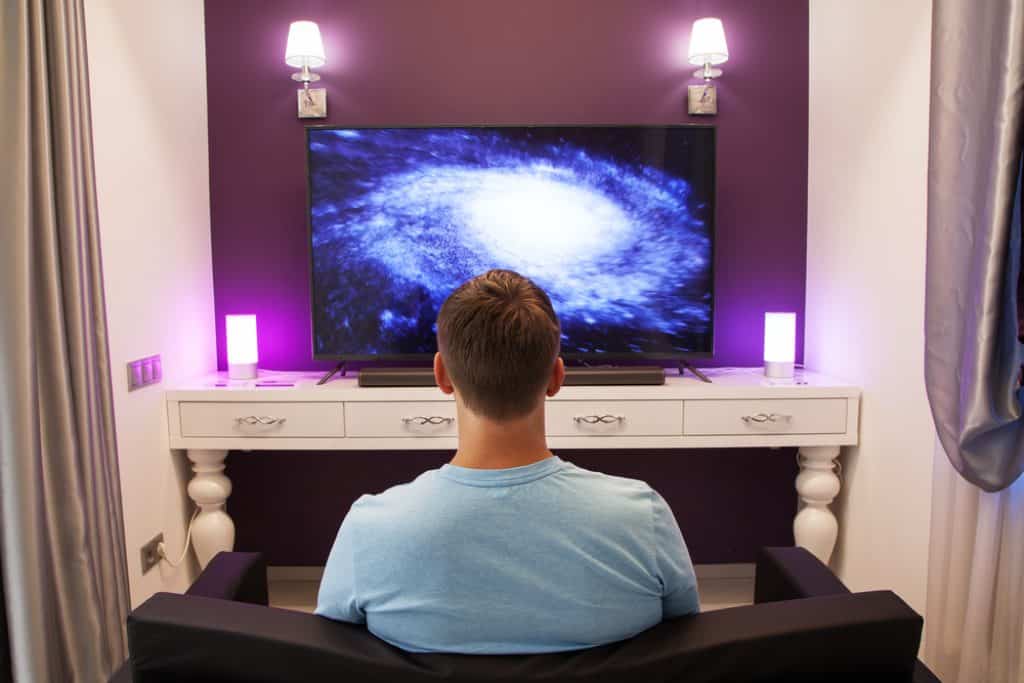 The LG 75UM6970PUB is most promising when it comes to its display performance. To give more details, this television comes with a 75-inch LED display.

This 75-inch display comes with a 4K UHD (3840 x 2160) resolution. 4K resolution is unarguably one the most common resolution that you will see in modern-day televisions.

Therefore, improving the overall picture quality of the television’s display.

Aside from coming with a 4K resolution, the LG 75UM6970PUB’s display supports HDR in HDR10 and HLG formats. HDR (high dynamic range) is a picture technology that enables a display to improve picture quality and contrast.

However, despite featuring 4K resolution and supporting HDR, this television’s display has a poor contrast ratio. To give more details, the LG 75UM6970PUB’s display comes with a contrast ratio of 967:1.

If you’re wondering, contrast ratio simply means the difference between the brightest whites and the darkest blacks a display is capable of producing.

Moreover, a poor contrast ratio like the LG 75UM6970PUB’s display’s 967:1 means that the display won’t be able to produce deep blacks. In other words, blacks on the display will look somewhat like gray.

As a result, content with plenty of dark scenes will be less appealing to watch on the LG 75UM6970PUB, compared to TVs with a higher contrast ratio.

Specifically, despite its $2000+ price tag, this television’s display has a maximum brightness of just 320 nits.

This feels disappointing right? Worry less because this TV’s display also has lots of upsides.

Thus, allowing images to appear colorful exactly as they are supposed to be on the display.

Also, the LG 75UM6970PUB’s display has impressive viewing angles. Therefore, colors or picture quality will remain accurate even when viewing the TV from the sides.

Moreover, as a result of its display’s impressive viewing angles, the LG 75UM6970PUB is perfectly fit for a large room setting.

Moving on, the LG 75UM6970PUB’s display handles reflection effectively. This is due to its semi-gloss coating that limits the amount of light reflected on the display.

That’s not all, the LG 75UM6970PUB’s display also comes with an impressive response time. To be more specific, the display has a response time of 14.1 milliseconds.

In case you are wondering, response time is the time that it takes a display to switch from a particular color to another. With such impressive response time, there will be minimal blur trails when viewing fast-motion content on the LG 75UM6970PUB.

To add to its impressive response time, the LG 75UM6970PUB’s display features a low input lag of 10.3 milliseconds. Briefly, input lag is the amount of time it takes a display to register a signal input.

As a result of its display’s low input lag, the LG 75UM6970PUB is an ideal television for playing video games.

In conclusion, the LG 75UM6970PUB’s display has some impressive features like low input lag, response time, and HDR support among others. However, the display also features some major flaws like poor contrast ratio and disappointing brightness.

All things considered, I will rate the LG 75UM6970PUB an eight out of ten in this display review section. 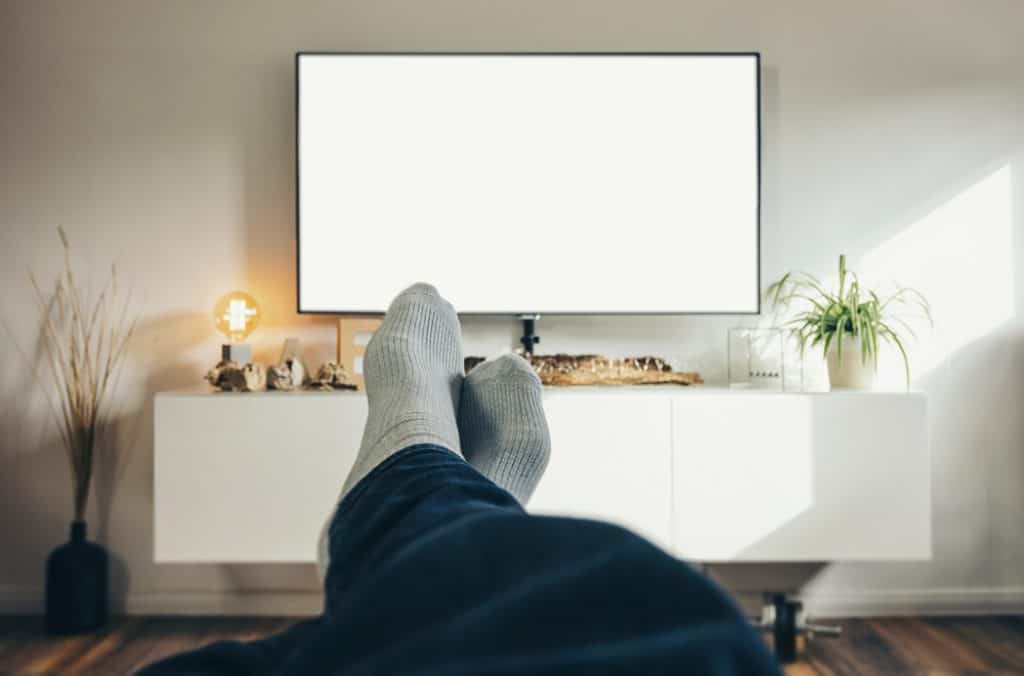 The LG 75UM6970PUB is an expensive TV that one would expect to deliver great sound quality. However, the television totally disappoints as it features a pair of 20-watt speakers that produce mediocre sound quality.

To make matters even worse, this television doesn’t feature a subwoofer. Therefore, bass is totally absent on the TV.

This means that bass-heavy movies or songs aren’t ideal to watch or play on the LG 75UM6970PUB.

In addition to its lack of bass, the LG 75UM6970PUB’s speakers also produce a lot of distortion. This was proven through the television’s results on a THD test.

If you are curious, THD (Total Harmonic Distortion) test measures the level of distortion a speaker or sound system generates. Also, the scores generated on the THD test are usually represented by a percentage.

This simply means that even at a moderate volume level, the LG 75UM6970PUB’s speakers will produce a significant amount of distortion. For clarity, distortion in this context means the alteration of a speaker’s sound production causing it to generate less-appealing sound.

On the bright side, the LG 75UM6970PUB’s speakers produce clear and audible dialogue. Briefly, dialogue is the sound delivered during a conversation between two or more characters in a movie.

To be honest, if you want to enjoy decent sound quality with the LG 75UM6970PUB, it is recommended you get a soundbar or external speakers.

Based on all the facts above, I will rate the LG 75UM6970PUB a six out of ten in this review section. 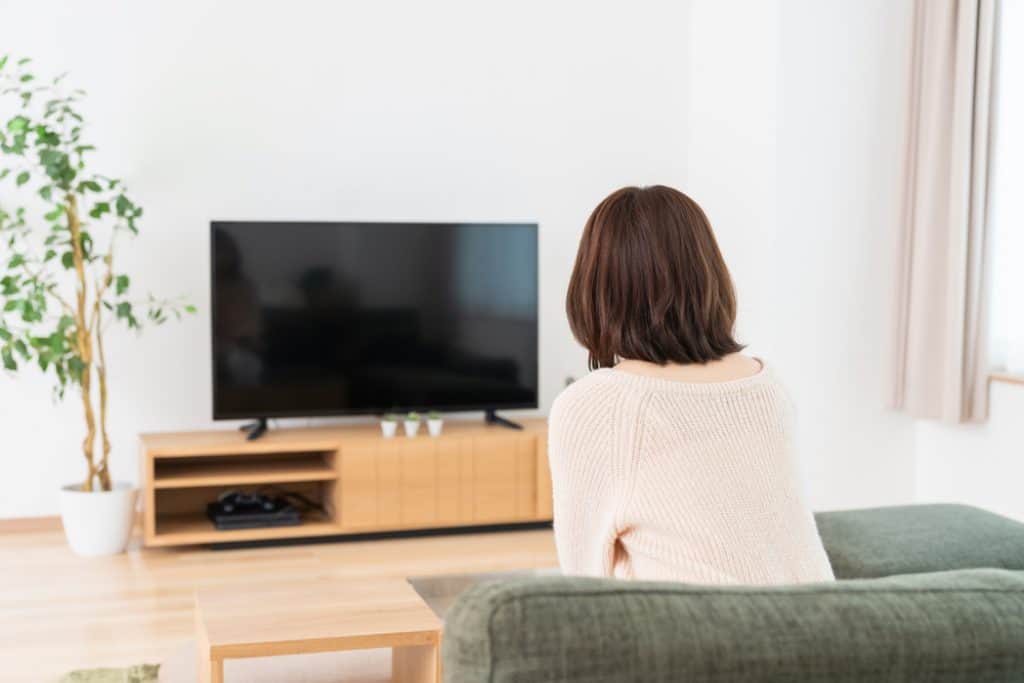 When it comes to the ports, the port selection that the LG 75UM6970PUB features aren’t bad at all. However, all of the ports are situated at the back of the TV.

So, if you’re wall-mounting this TV, you may have some troubles accessing some of the ports.

To be more specific, a few of the ports are on the lower part of the television’s back. The remaining ports, however, are on the right side of the TV’s back.

That said, the LG 75UM6970PUB comes with three HDMI ports. One of these HDMI ports supports ARC (Audio Return Channel).

This simply means you can use that particular HDMI port to connect a soundbar to the television. The LG 75UM6970PUB also comes with two USB ports and an RF connector for attaching an antenna to the TV.

In addition to that, this television features an Ethernet port as well as composite video inputs. When it comes to wireless connectivity, the LG 75UM6970PUB features an in-built 802.11ac Wi-Fi and Bluetooth 5.0.

Moving on to the remote control, the LG 75UM6970PUB features the standard LG remote that is made of weak plastic. Furthermore, the remote has a matte-black finish and it is small enough to perfectly fit your palm.

Impressively, this remote also features a full number pad. Below this number pad, there is a volume rocker as well as a channel selector.

Also, a huge “LG” logo is finely placed at the bottom of this remote control. This logo gives the remote a decent look and makes it appear pleasing to the eye.

However, the LG 75UM6970PUB doesn’t come with the magic remote control. Hence, you have to purchase it separately.

To conclude this ports and connectivity review section, I will be rating the LG 75UM6970PUB an eight out of ten for its reasonable amount of ports. 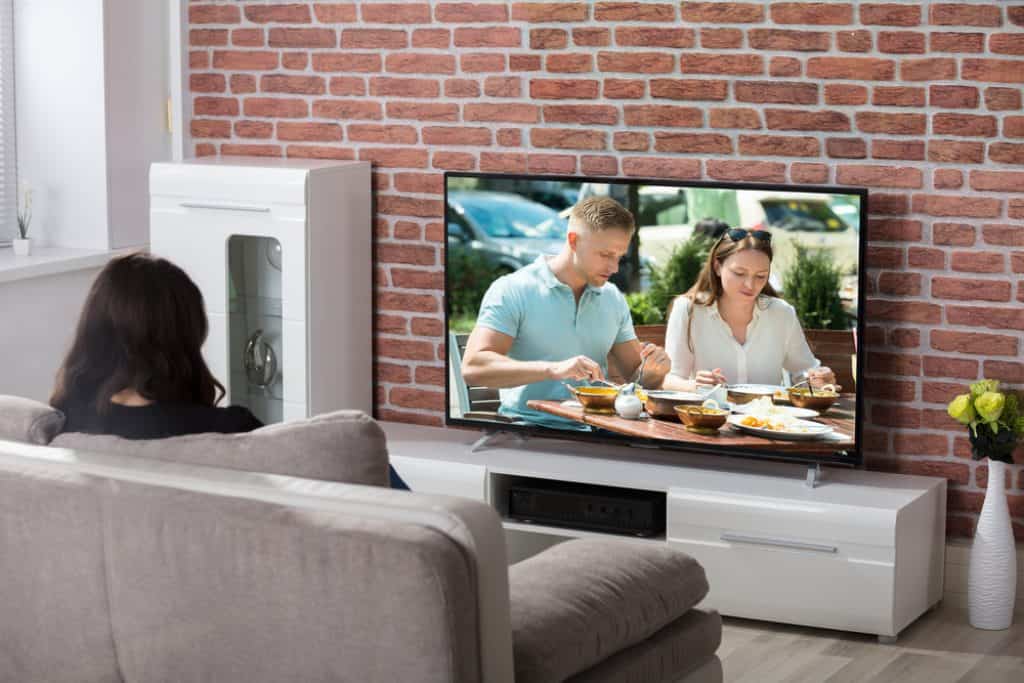 The webOS is the operating system that powers LG smart televisions and the LG 75UM6970PUB is no expectation. This webOS offers a smooth and user-friendly interface.

Also, the operating system runs fast and has minimal lags. This is a good thing because navigating and selecting streaming apps on this OS will be easy.

Speaking of streaming apps, the WebOS comes with a variety of major streaming apps. A few of them include YouTube, HULU, Netflix, Amazon Prime Video, and Disney+.

Going further, LG 75UM6970PUB supports AI gadgets like Amazon Alexa and Google Voice Assistant for voice input. However, neither the television nor its remote control features an in-built microphone.

Thus, to use the voice input feature, you have to purchase a Google Home speaker or an Amazon Echo.

Then, connect your smart device to the television via Bluetooth.

All things considered, I will rate the LG 75UM6970PUB an eight out of ten in this smart features review section. 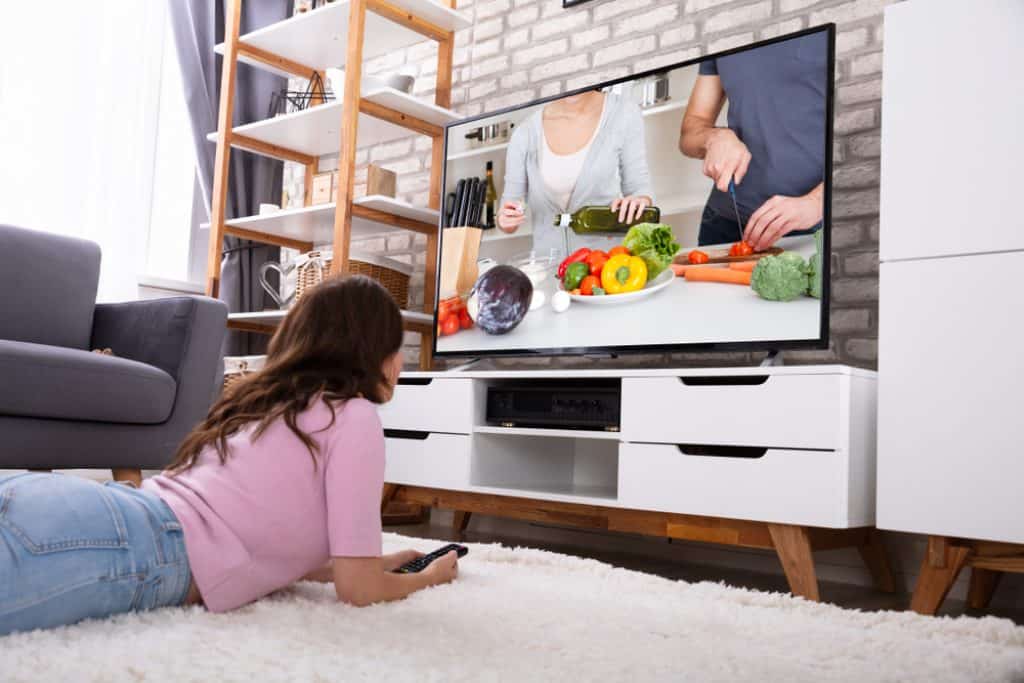 1. Is LG A Reliable TV Manufacturer?

Yes, it is. LG is a reliable TV manufacturer that has been in existence for over 63 years.

Their longevity and consistency in delivering quality products make them very reliable.

Yes, it is. The LG 75UM6970PUB is a smart TV that comes with LG’s own WebOS which offers the majority of popular streaming apps.

Yes, it does. The LG 75UM6970PUB comes with Bluetooth 5.0 for wireless connectivity. 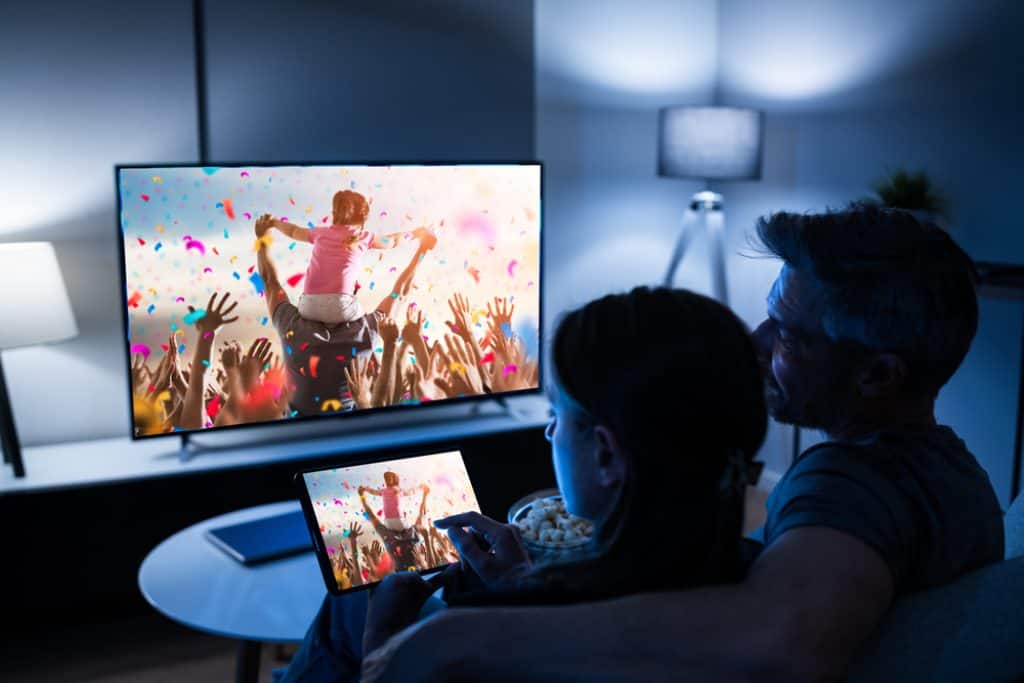 The LG 75UM6970PUB is a smart TV that features a 4K display with decent picture quality. However, despite its expensive price tag, there are lots of areas I believe this television could do better.

For instance, the TV’s display has a poor contrast ratio and disappointing brightness. Also, the sound department of this television is nothing to write home about – it is extremely poor.

However, having some major flaws doesn’t make the LG 75UM6970PUB entirely bad as this TV has some good features as well. For example, this TV comes with a low input lag and an OS that offers major streaming apps.

Overall, the LG 75UM6970PUB comes with some amazing features, but its flaws can’t just be overlooked.

Have a better 2022 with these tech resolutions

10 Common Signs That Show You Are Suffering From Food Addiction

The Dorchester Hotel in London to Remain Open During Major Renovation