Blonde, buxom and blue-eyed, her body was found face down — her skull crushed — in Teal’s Pond on July 7, 1908, in a heavily wooded remote section of Sand Lake near upstate Troy, NY.

The investigating DA interviewed all the locals who knew her, her family, many of her secret lovers, and anyone who encountered her by chance the night she was murdered, but gave a pass to two influential suspects, both Republicans in the notoriously corrupt town.

And yet, the story of Hazel Drew never died. Decades later, screenwriters David Lynch and Mark Frost were brainstorming story ideas in a Los Angeles coffee shop when Frost remembered stories from his youth, fabulist tales spun by his grandmother while he spent his summers in Taborton, NY, close to the scene of Drew’s murder.

“Don’t go into the woods at night,” his grandmother warned him. Hazel Drew’s ghost was said to haunt the area, waiting for her killer to be identified.

Frost and Lynch agreed it was a great premise for a TV show. They used Drew’s story as inspiration for their character Laura Palmer (played by actress Sheryl Lee) and suddenly their cult hit crime drama, “Twin Peaks,” which first aired in 1990, was born.

Both Hazel Drew and Laura Palmer were small-town beauties whose murders exposed the ugly misdeeds of wealthy, prominent locals. Both had secret lovers and sordid relationships. But while the “Twin Peaks” murder is eventually solved, Drew’s killers were never revealed until now, according to a new book, “Murder at Teal’s Pond” by “Twin Peaks” fans David Bushman and Mark Givens (Thomas & Mercer), out now. 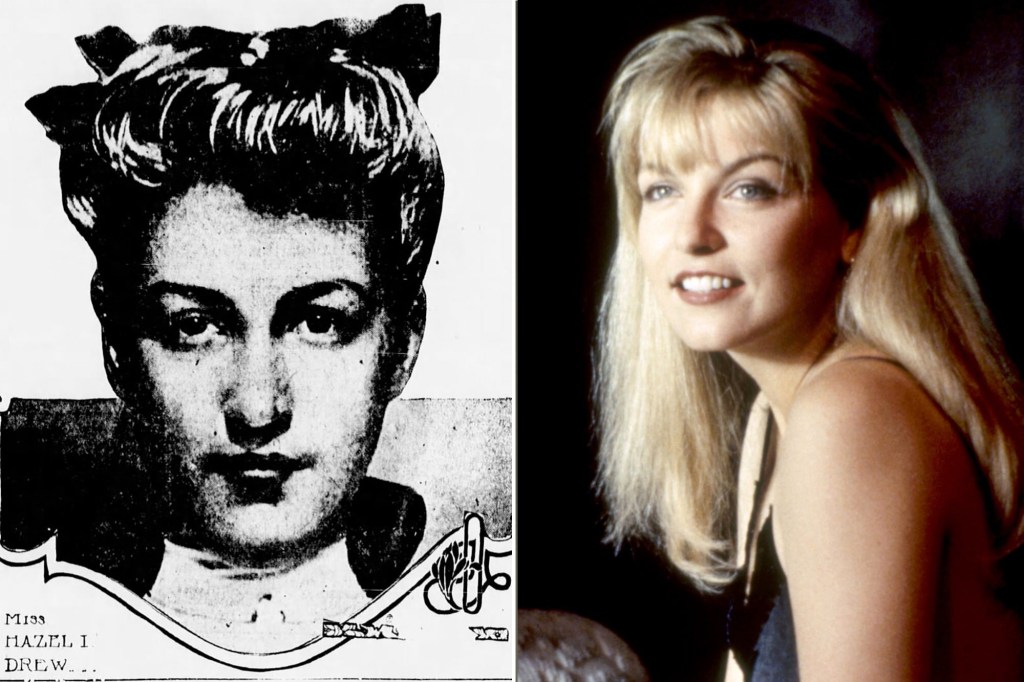 “Investigating a 113-year-old cold case wasn’t easy. We do, however believe we’ve uncovered the murderers,” write the authors.

“The solution,” they claim, “is explosive.”

On the night of July 10, 1908, a group of teenagers pitched their tent close to Teal’s Pond in Sand Lake, NY, and planned to fish and squirrel hunt by day, eat and drink by night. 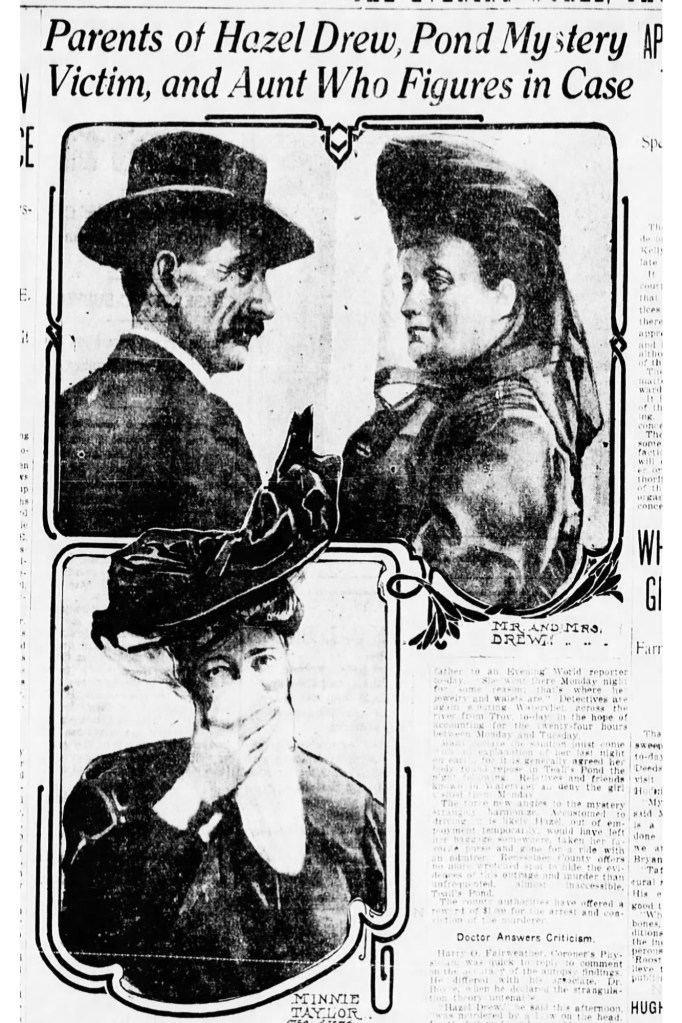 Even Hazel’s parents didn’t know about their daughter’s secret life — until a trunk and a hatbox containing bills, receipts and love letters surfaced after her death.

The next morning, one of the boys spotted something floating in the stagnant water: A corpse face down with arms outstretched and only the head and shoulders visible.

“Large black crescent-shaped hair combs with rhinestones and a ‘rat’ — a half moon shaped accessory used to plump up pompadours — remained clasped firmly in place on her matted mane,” the authors write.

A high-crowned black straw hat adorned with large black ostrich plumes was found close to the pond’s edge. The milliner’s mark had been ripped out and pinned to the hat was a pair of black, wrist-length gloves. 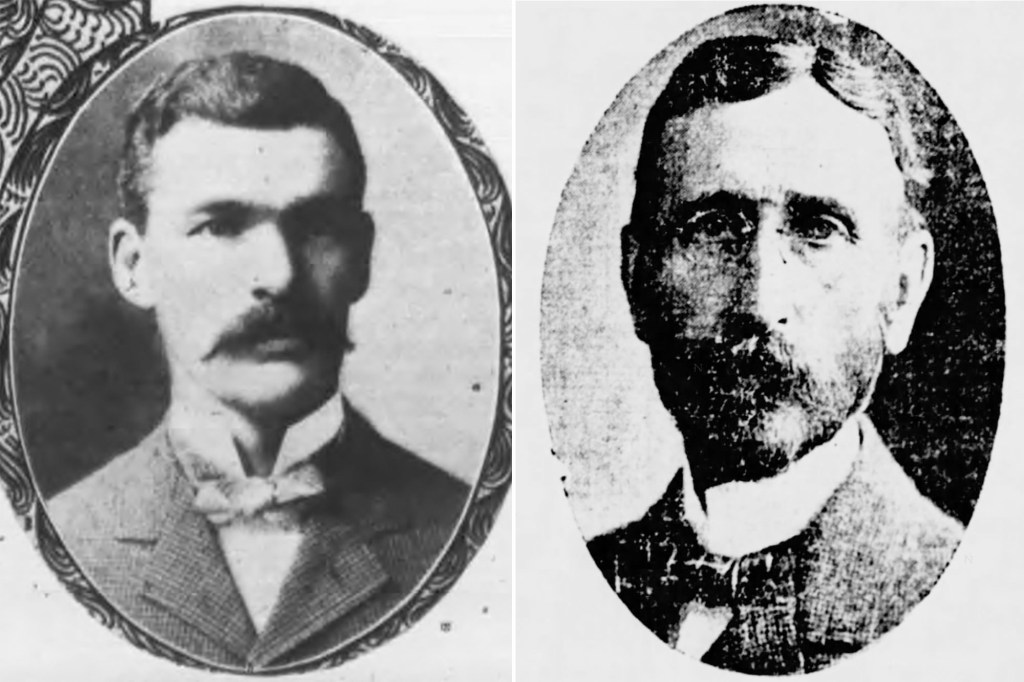 When the body was removed, its skin was shriveled and as “black as midnight,” the face frozen in a grimace.  Decomposition of the body was so advanced, doctors were indecisive about how she died. Even Drew’s father couldn’t be sure it was his own daughter until he was shown her hatpin and broach the following day.

The coroners’ inquest ruled death by suicide, but no one was buying that.

A charismatic and striking young beauty, Hazel Drew worked from the age of 14 as a domestic servant for some of the most prominent Republican men in Troy. They included Thomas W. Hislop, the city’s first-ever treasurer, who left his job amid a financial scandal, and John H. Tupper, a high-ranking member of the Retail Coal Dealers’ Association responsible for crushing the local labor movement of miners seeking higher wages.

Working at these homes, Drew stepped into a “cauldron of crime, sex, glamour and corruption,” write the authors.

Although Drew earned a modest $4.50 a week, she was able to buy custom-made dresses, fancy hats and Cuban heels fashioned for dancing. She loved to shop, dine in fancy restaurants and travel to New York City, Boston and Providence. 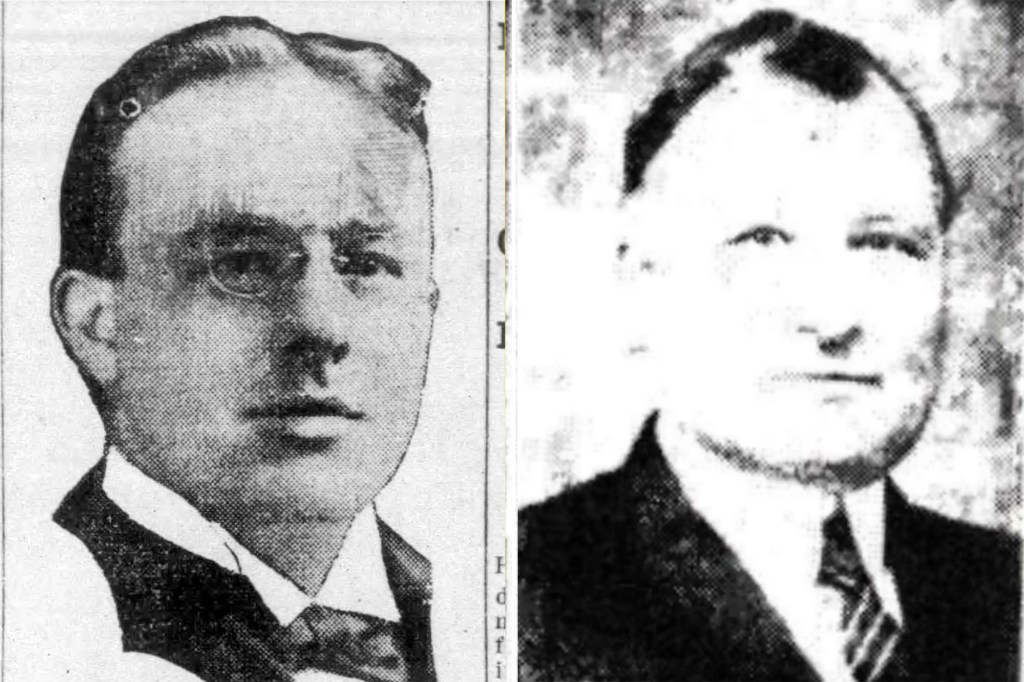 Detective William Powers (left) absolved suspects Fred W. Schatzle (right) and William Cushing, who were both Republican politicians in Troy, even though witnesses tied them to the crime.

“Hazel lived a life filled with secrets, mysteries and contradictions,” write the authors.

Even her own parents knew little about her activities until they opened a bundle of letters and postcards in a trunk she left behind — missives from admirers and secret beaux declaring their love and obsession with their daughter. Then, a New York World reporter covering the murder found a hatbox filled with photographs, bills and receipts that showed Drew had once taken “French female pills” to assist in maintaining menstrual cycles — and induce a miscarriage.

Jarvis O’Brien, district attorney for Rensselaer County, was called in to investigate. He leaned on his number-one deputy and close pal, Detective Duncan Kaye, “an ardent soldier” in the local Republican Party. Also on board were two detectives active in Republican politics as well.

Pressured by the public and national press, investigators interviewed suspects on what seemed like a daily basis, but the case remained unsolved — even after two witnesses came forward with a compelling story. 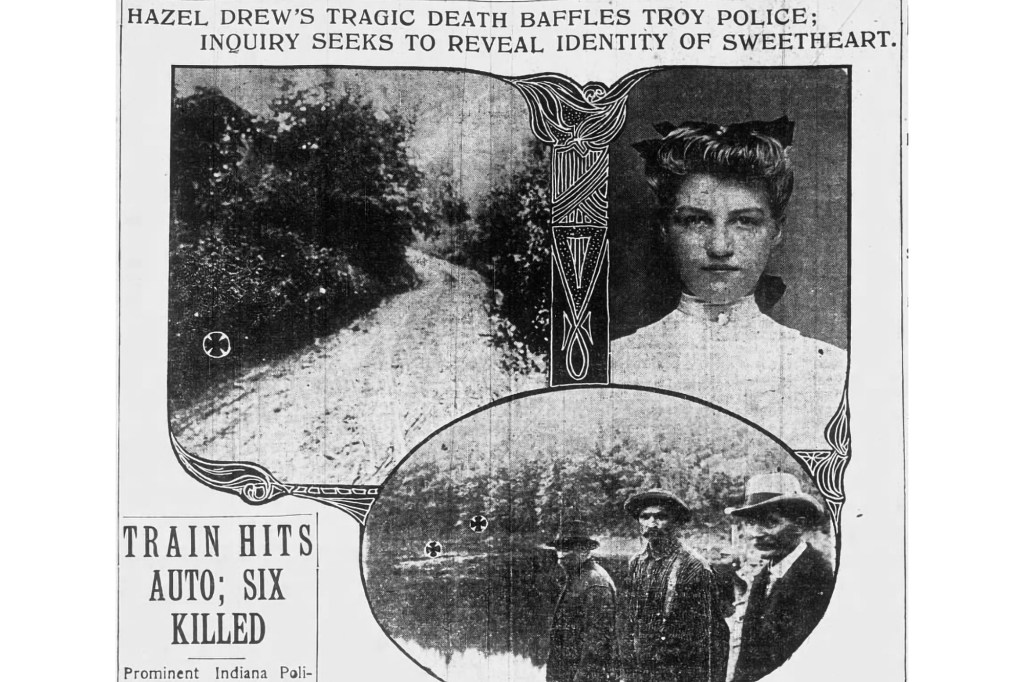 Hazel Drew’s murder was a sensation in New York City newspapers — and is even talked about today by locals who fear the woods near her murder are haunted.

William and Elizabeth Hoffay told detectives they were driving their carriage past Teal’s Pond on the evening of July 7, when they encountered another carriage out that night — a fancy, custom-built coach with a handsome colt, which implied luxury uncommon to that area — “city folks.” The driver turned to avoid making eye contact and there was something in the back of the rig, the Hoffays said, but they couldn’t make out what it was. As the couple looked back at the pond, they saw another figure lurking on the far shore — precisely where Hazel’s hat and glasses were later found.

‘Hazel lived a life filled with secrets, mysteries and contradictions.’

Police heard the couple’s story but did not investigate for a week. Eventually, Detective Powers learned the name of the suspected coach driver: Fred W. Schatzle, an embalmer for the local undertaker and also a Republican politician. Schatzle, it turned out, had telephoned the livery on July 6, requesting a horse and carriage for a friend, William Cushing, the Republican committeeman for the Eleventh Ward. Cushing admitted to police that Schatzle helped him secure a carriage to take him to Sand Lake on the night of the murder. And both men knew Hazel Drew.

Even though the Hoffays told detectives they could identify the men they saw, they were never shown pictures of Schatzle or Cushing. The single newspaper to report on the lead and publish Schatzle’s name was The Daily Press — Troy’s only Democratic daily paper. In a town ruled by Republicans, the two suspects were quickly absolved, and the case was quickly dropped. 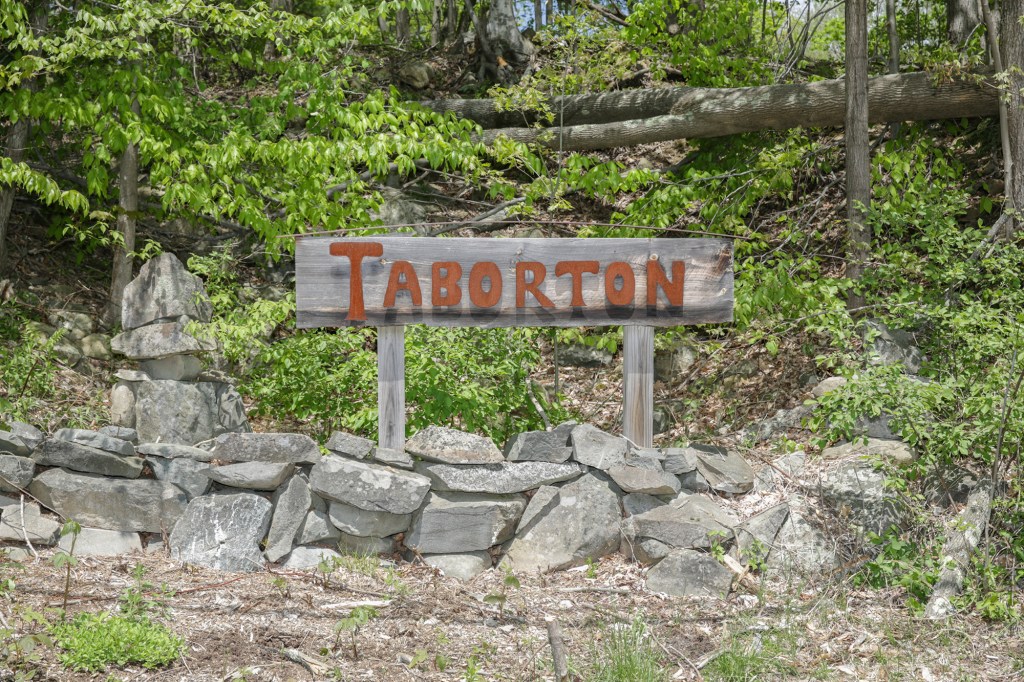 For the authors of “Murder at Teal’s Pond,” this was enough to reach their conclusions:

“After five years of intensive research and deliberation, we have concluded that Hazel Drew was murdered by William Cushing and Fred Schatzle – and protected from justice by William Powers and possibly his fellow detective Duncan Kaye,” they write.

But what was their motive? Were Cushing and Schatzle contracted to do the dirty deed, and, if so, who hired them? Could it have been former treasurer Thomas W. Hislop or coal man John H. Tupper? Could Hazel have heard something scandalous while in the employ of these powerful men or have become romantically entangled with one of them who now wanted to end it? 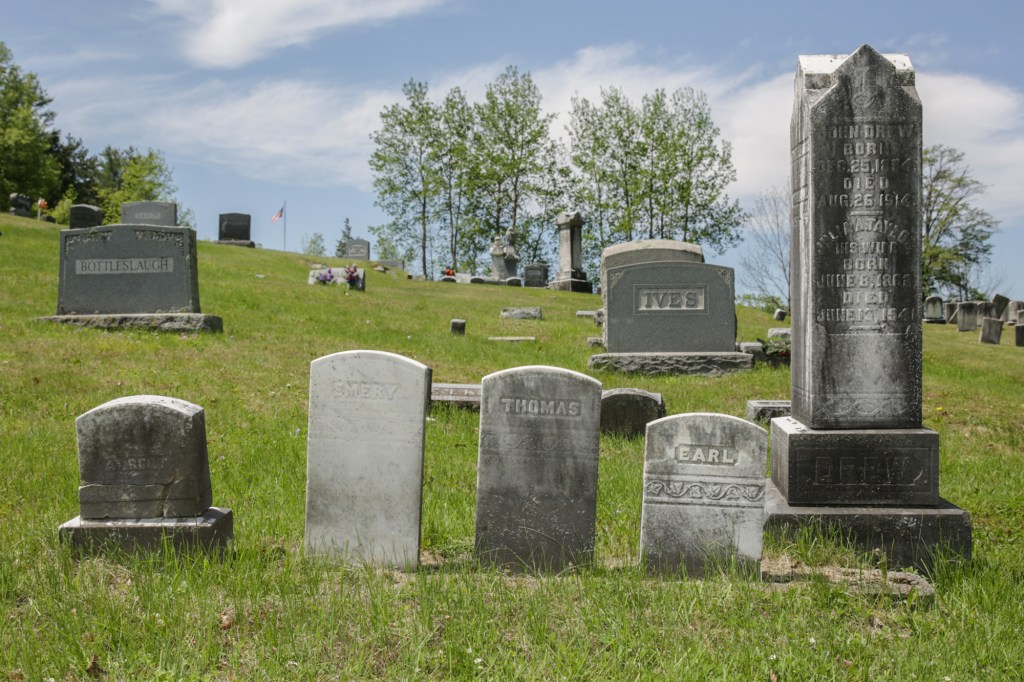 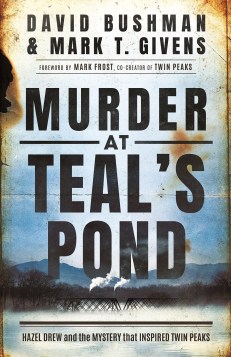 “Any of these men could have been motivated to have Hazel killed,” the authors write. “None were seriously investigated at the time. All had ties to the Republican Party and it seems easier to accept that O’Brien and/or certain of his detectives would have been motivated to cover up the activity of Cushing and Schatzle if they had been acting for someone with influence in Troy — especially someone in the party. But it is also conceivable that they were protecting Schatzle and Cushing simply because of secrets about the inner workings of the party that the two young men were privy to.”

Alas, the deepest secrets about Hazel Drew may be buried forever. But, by revealing Schatzle and Cushing’s role in her murder, the authors write, “We hope that her spirit now rests in peace.”

One thing is for sure — especially for fans of “Twin Peaks,” which became one of TV’s most enduring classics, all because of a grandmother’s stories of a murder in the woods.

“Hazel Drew was, in life, a ghost,” the authors write. “In death — a superstar.”

Trump Will Own the 2022 Midterms as Much as Biden Will

AI is reinventing what computers are