London’s teenage murder toll has hit a record high after a 16-year-old boy was stabbed to death in Hillingdon.

The death of the teenager, who hasn’t yet been named, marks the 30th in the capital’s stabbing homicides this year.

It comes as experts have warned that disagreements between teenagers are exacerbated when played out online, and that the amount of violent content has helped normalise aggression.

Police were called at 7.34pm yesterday to reports of an injured male at the Philpotts Farm Open Space close to Heather Lane in Yiewsley.

Officers attended and found the boy suffering from a stab wound. Despite the efforts of paramedics, he was pronounced dead at the scene at 8.25pm.

His next of kin have been informed and are being supported by specially trained officers. 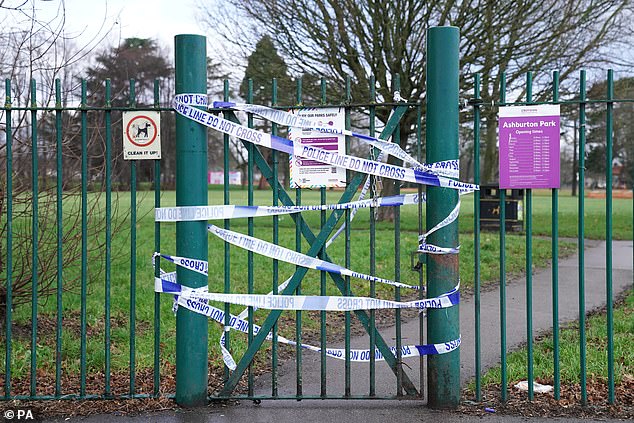 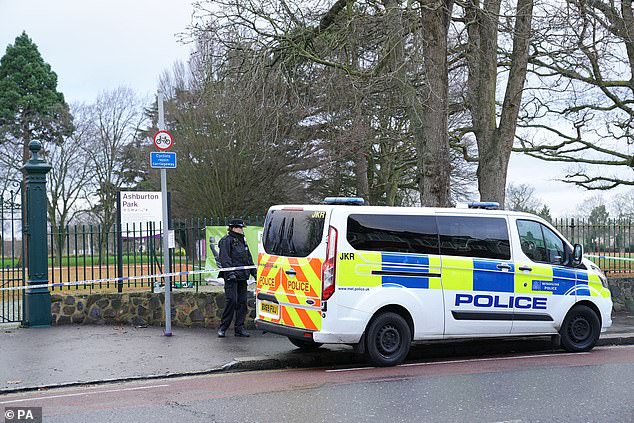 Detectives from the Specialist Crime Command are investigating. There have been no arrests and enquiries continue.

And just minutes earlier a 15-year-old boy, who has not yet been formally identified, was stabbed to death during an assault in Ashburton Park in Croydon.

Police officers gave first aid to the boy before the ambulance service arrived but he was pronounced dead at 7.36pm.

No arrests have been made and a crime scene remains in place as enquiries continue.

Their deaths took the number of teenagers murdered in the capital this year to 30, the highest number since World War Two. The previous highest toll was 29 in 2008. 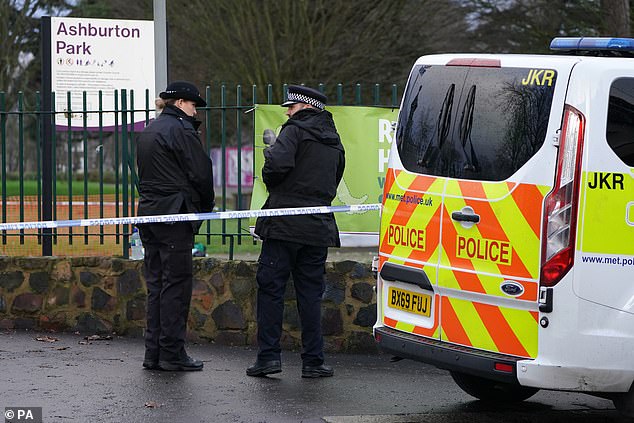 A 15-year-old boy, who has not yet been formally identified, was stabbed to death during an assault in Ashburton Park in Croydon (pictured, officers at the scene) 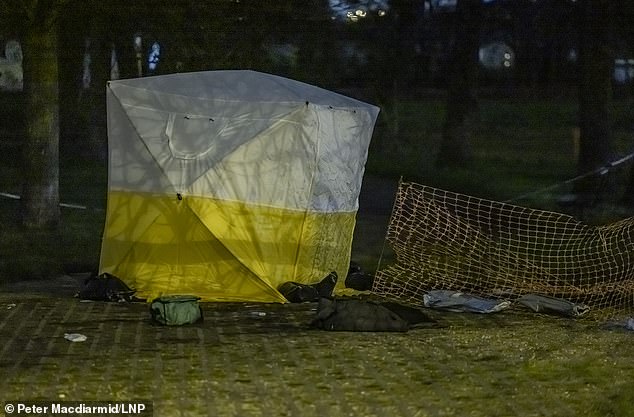 He said: ‘Violence has been normalised, especially over the last 10 years through social media.

‘It’s a crazy situation here where if a person goes to a live event and starts livestreaming music they will be silenced and perhaps have a sanction, whereas someone can be online posting violence and use the p word or the n word or a load of expletives and nothing actually happens.

‘The reality is that social media platforms have got a lot to answer for. In practically every situation where we’ve seen violence happen there has been some sort of connection with an online platform in some form. 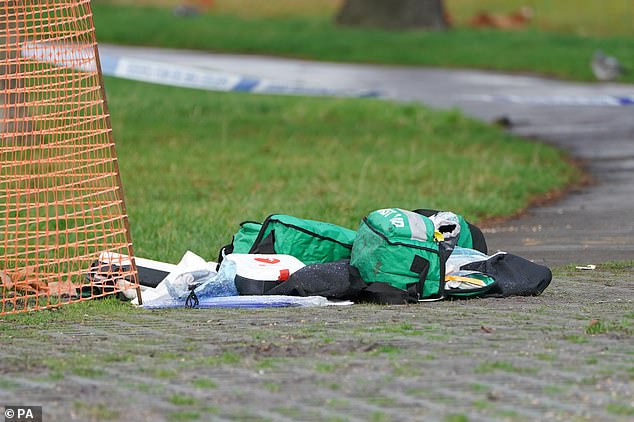 Police officers gave first aid to the boy before the ambulance service arrived but he was pronounced dead at 7.36pm. Pictured: The aftermath of the stabbing

Jon Yates, executive director of the Youth Endowment Fund (YEF), said there are three factors behind the rise in violence: an increase in the number of children who are vulnerable, for example in care or excluded from school; increased pressure on services such as policing, mental health and youth work; and social media fuelling conflict.

He added: ‘We don’t fully know the impact of social media. But any young people I talk to say that social media and the fact that something they say in passing becomes written down, causes what might have been nothing to become something.’

‘This is not a one-off, one year problem,’ Mr Yates said.

‘The actual number of young people who die tends to vary but the number who are being seriously injured has been going up for a number of years, right back from 2013. In many cases the difference between a serious injury and a fatality is millimetres. 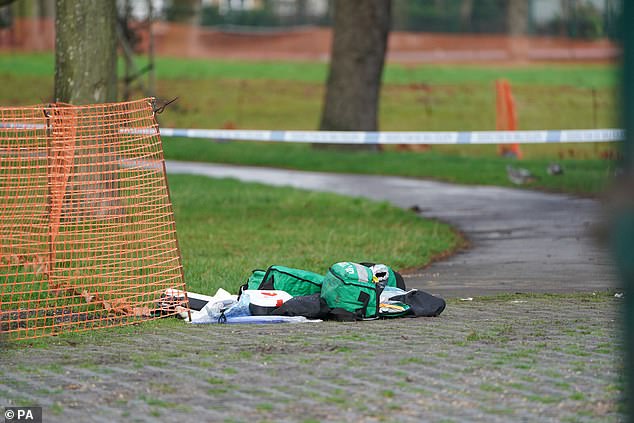 Pictured: Discarded paramedic equipment lies on the ground at Ashburton Park in Croydon

‘If we’re serious about making a difference the solution is obvious. We’ve got to find out what works best, and then we’ve got to execute it.’

Domestic abuse has long been recognised as an aggravating factor in young people becoming involved in violence in later life, and new research suggests it may also be linked to extremism or terrorism. Mr Yates said: ‘For most young people in this country violence isn’t at all normal, but there is a proportion whose lives are far too full of violence.

‘Part of that is social media, but lots of it is their day to day lived experience, of having friends or friends of friends seriously injured. The most important thing we can do, particularly those of us who live relatively safe lives, is get much better informed about what works to make a difference.

‘We know that for a child to witness domestic abuse is a risk factor, it makes them more likely to become involved in violence. ‘What we don’t know is what’s the best way to address that.’

Mr Smart, who was himself jailed for 12 years for a drugs crime and is now a youth work expert studying for a PhD, believes there needs to be a reduction in bureaucracy in agencies that help the young.

‘I’ve gone into meetings and I’ve spoken to people round the table, great organisation, everybody trying their real hardest.

‘I’ve worked it out and I’ve said how long have you spent with the young person or the client since the last meeting?

‘And we’ve been in the meeting longer than they’ve spent with the client. How does that make sense?’

How many teenagers have been killed in London in 2021?

There have been a total of 30 teenage killings in London in 2021.

This surpasses the 27 killings seen in 2017, which had been the highest in recent years.

This year’s total is higher than the 2008 record of 29 for a single year in London.

This is a list of the 30 victims this year: 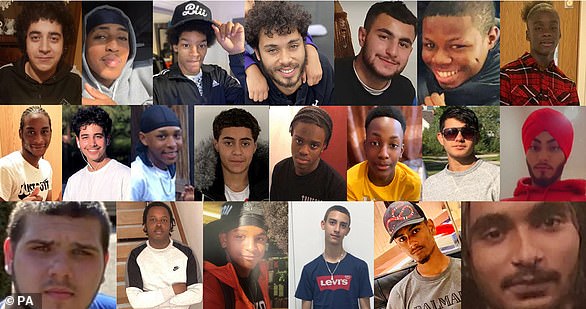 3 reasons why DeFi users are bullish on Abracadabra, Magic Internet Money and SPELL