Thoughts on navigating the transition to Windows 11

We’re nearly one week into the lifecycle of Windows 11 and so far the reviews range from “I love it” to “meh” to “How do I get my start menu back.”

While there are a lot of good things in Windows 11 (such as building blocks for better security, especially when connecting to cloud services) the new operating system carries a hardware price tag: Most of us will need to buy our way into a new computer to run Windows 11. Sure, there are unofficial and even  official ways around this new blocks, the threat of not getting updates for these officially unsupported platforms means I’ll not be recommending these methods.

For example, my Windows Insider virtual machine is now officially unsupported because it does not have a TPM 2.0 module. Since I didn’t enable TPM during the early beta, I’m now getting a notification that my VM won’t get the latest Insider build. You can use the registry key method to bypass the TPM 2.0 requirement, but the machine has to at least support TPM 1.2 before you can bypass the 2.0 requirement. 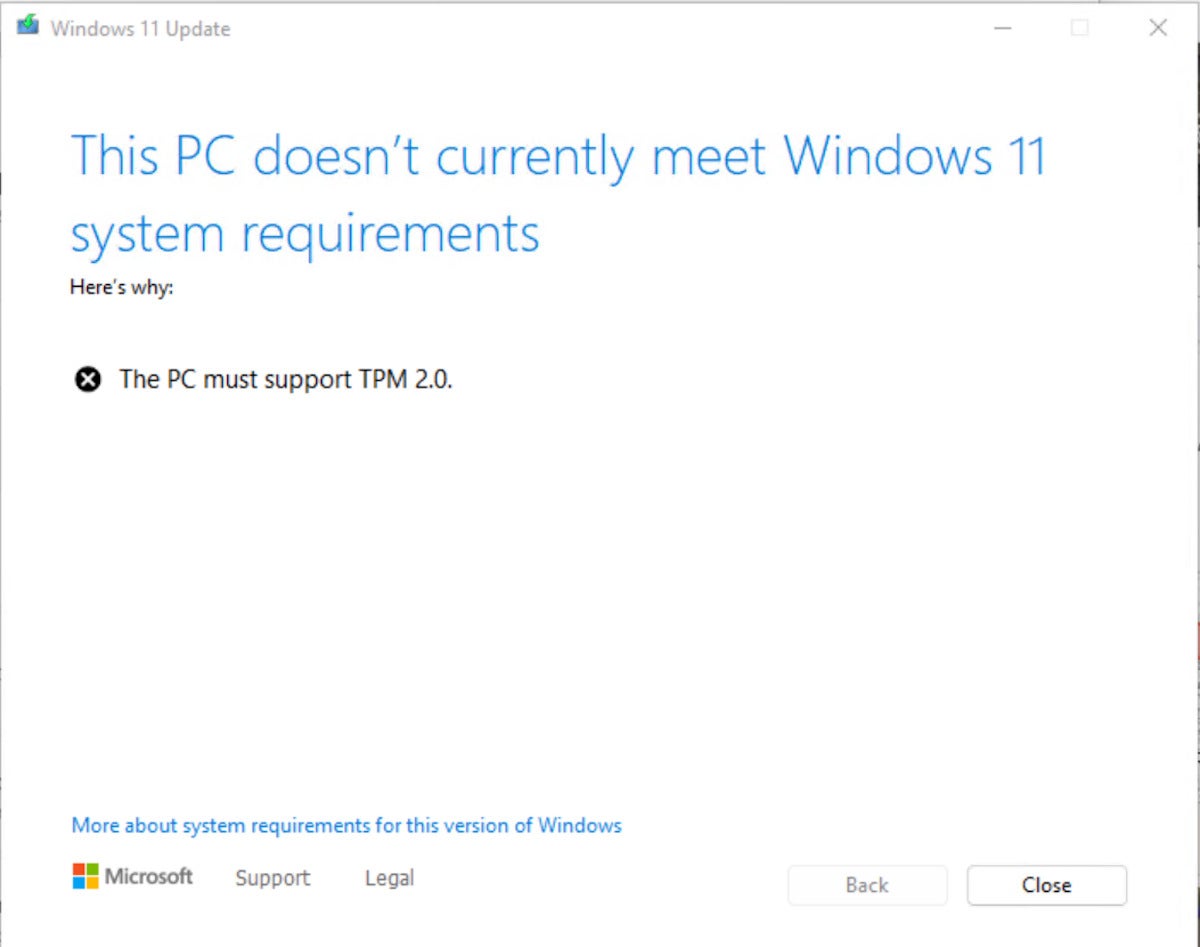 TPM 2.0 support is an important part of why Microsoft says Windows 11 is more secure than Windows 10.

If you have a machine with no TPM module, you might be able to add one to the motherboard if it has a TPM slot available. But if your machine’s processor isn’t officially supported, there’s no software update path to Windows 11. You’ll have to upgrade the processor. For a desktop, this might also mean an upgraded motherboard, too. For a laptop, you’ll just want to buy new.

Why not just go around the hardware recommendations? Because you don’t want Windows 11 on a system that might take a performance hit. While Microsoft will test Windows 11 on the hardware it plans to support, it won’t do the same for hardware that’s not supported. If there’s a documented performance hit on supported hardware, Microsoft will come up with a fix. (Already, we’ve seen AMD systems being effected, with a patch coming soon.) The only reason to use one of these workaround methods is if you plan to simply test the platform.

Many IT pros and Managed Service Providers who offered feedback via my unofficial survey about when they plan to roll out Windows 11 indicated they won’t do so anytime soon. Most plan to wait at least six months, if not longer. Some of my line-of-business vendors also indicated they need time to test Windows 11 before they certify support. (The survey about both Windows 10 and Windows 11 is still open for feedback if you’re an IT pro or MSP.)

The changes in Windows 11 (and how to change them back)

For those who’ve rolled out Windows 11, most users either love – or absolutely hate – the new centered Start menu. In response, the Microsoft ecosystem of third-party developers has come to the rescue with options. First and foremost is Start11 menu from StarDock. You can choose from several different styles, including Windows 10 or Windows 7, to replace the centered look of Windows 11. I’ve used Stardock’s Fences software as well as Start10 on several machines used by people that did not like the transition from Windows 7 to Windows 10; I never had issues, so I can recommend it as a viable menu system for users that just don’t like the Windows 11 approach. 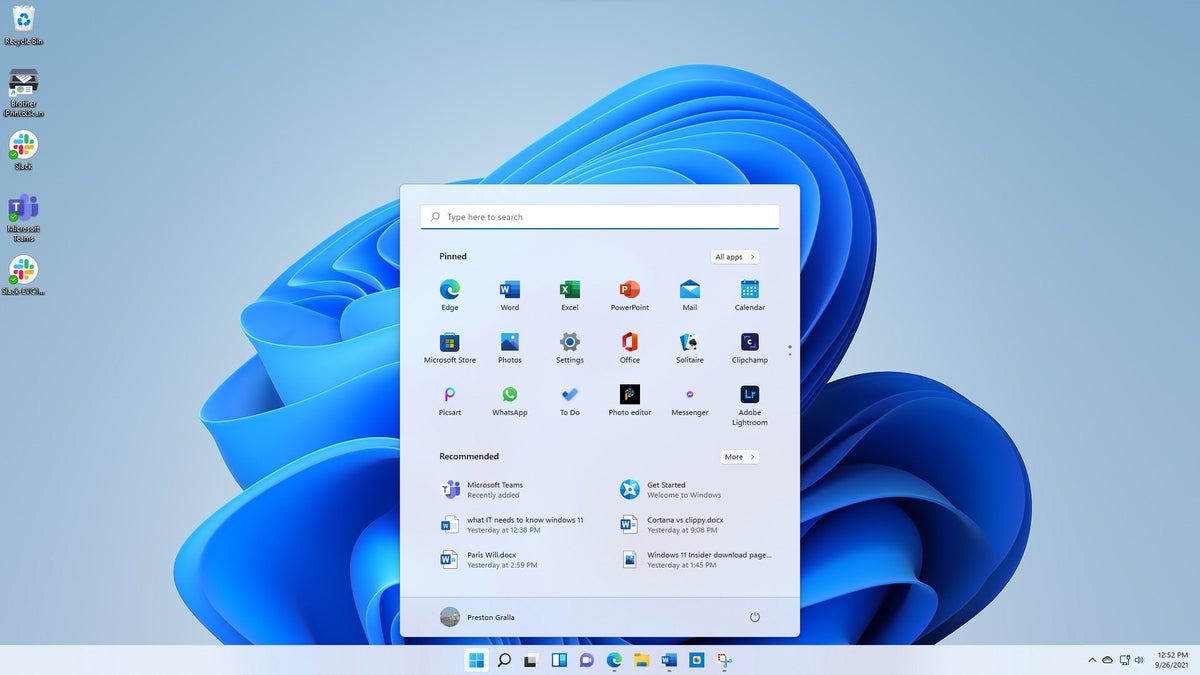 Windows 11 gets a centered Start menu that not everyone likes.

While ClassicShell is no longer under active development, it still works on Windows 11 to put back the more traditional menu system. There is also a new fork of Classic Shell (called OpenShell) that works with Windows 11. It can be downloaded from Github to convert the menu system as you like. As with  Stardock, I’ve tracked few issues with ClassicShell and I expect OpenShell will be the same.

The new Windows 11 file explorer has prompted questions about excessive CPU use; the feedback hub has had several feedback postings indicating high resource use. Not surprisingly there already is a third-party option to bring more features to File Manager. Called Files, it’s available from the Microsoft store or Github and adds options such as syncing with cloud services like OneDrive, Google Drive, and iCloud. The software also allows for full file preview and for tagging files and folders, so you can more easily find and sort documents. It also brings a browser-like tab interface along with keyboard shortcuts.

While I applaud third-party options to what Microsoft has developed, I cringe at relying on these fixes for issues Microsoft didn’t take the time to complete. And installing additional software that needs to be monitored for security issues defeats the purpose of being a “trusted platform.”

Personally, I always see a new release as a sign that I need to be testing, but not installing, the “new thing.” I always wait for the first few releases to see what issues come up. I see Windows 11 as nothing more than a major feature release with a dash of new hardware mandates, so I’ll be keeping an eye on the Windows 11 release pages to see what bugs are fixed and what security issues are patched. Ultimately, no operating system will be bug free.

While Windows 11 will lead us to more secure systems, it won’t be the magic bullet of security Microsoft wants you to think it is.

A better way to legalize marijuana