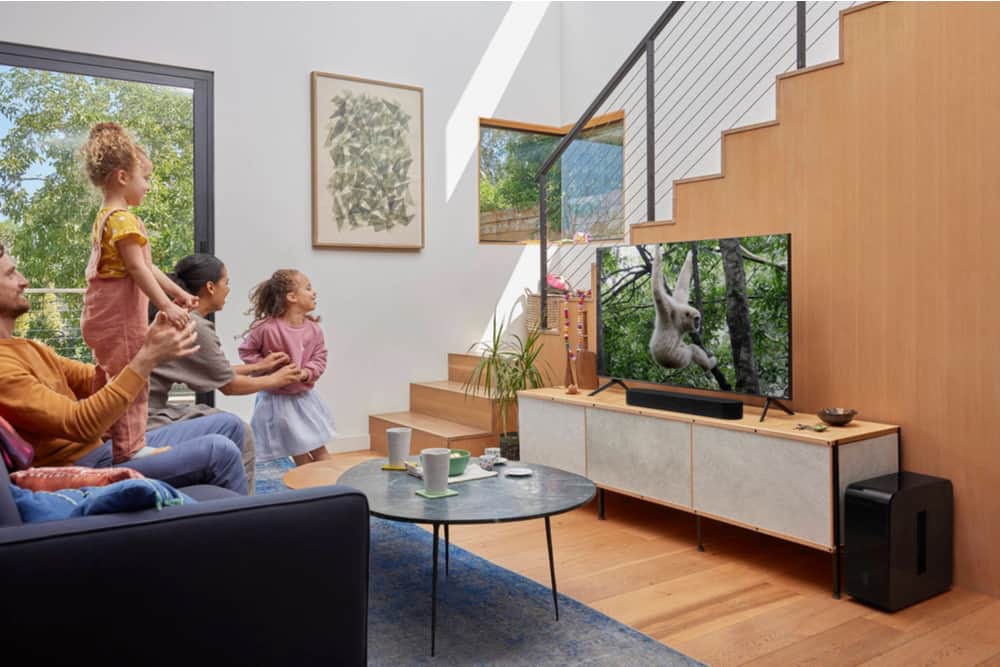 The VIZIO D65x-G4 is a 4K television with an impressive contrast ratio for delivering decent picture quality. Furthermore, this television features an in-built Chromecast for a premium viewing experience. Sadly, the TV comes with a limited number of ports.

Have you been wanting to get yourself a low-budget 4K TV? If yes, then this D65x-G4 review is worth reading.

In this review, I will analyze the specification of the VIZIO D65x-G4 TV in great detail. To accomplish this, I will discuss the television’s design, display features, sound features, port and connectivity features, and smart features.

Moreover, since this is a comprehensive review of the VIZIO D65x-G4, you will get to know the advantages and disadvantages of the TV. Additionally, I will offer the TV a rating at the end of each section based on its performance and features.

Finally, if you read this review article all the way through, you will have enough information to decide if the VIZIO D65x-G4 is worth your money. 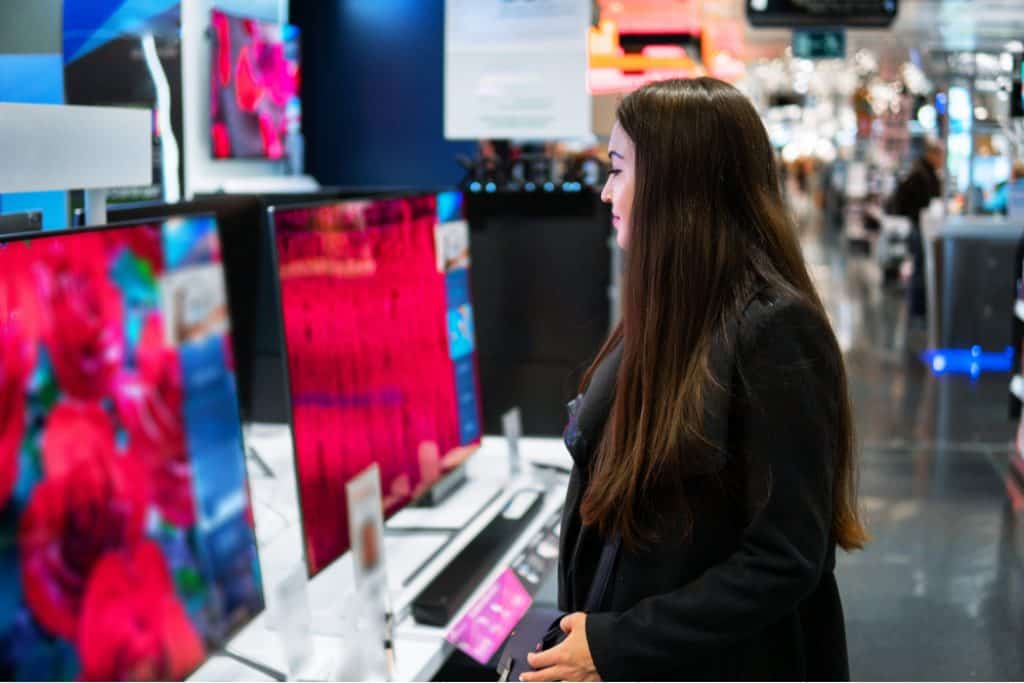 VIZIO is one of the most prominent 4K TV manufacturers, known for producing high-quality, budget-friendly televisions. Furthermore, in 2016, this TV brand introduced its D-Series with about 25 unique models which had excellent features and different sizes to choose from.

A model in this D-Series is the VIZIO D65x-G4. This television is a 4K TV that comes with great features including an impressive contract ratio, low input lag, and an in-built Chromecast.

However, this TV lacks some important features that could turn off potential buyers. What are these features that I am talking about?

Read on to find out!

For a TV that won’t break your bank, the VIZIO D65x-G4 sure has a decent design. To give more details, this television features a plastic chassis with a smooth matte-black finish.

Additionally, the TV has not-too-thick, not-too-slim plastic bezels that surround its display screen. Also, these bezels feature the same matte-black finish as the chassis of the television.

As expected, there is a “VIZIO” logo neatly placed at the center of the bottom bezels. This logo gives the television a rather appealing look when viewed from the front.

That said, the VIZIO D65x-G4 comes with a pair of “V” shaped legs. Although these legs are also made of plastic, they are very sturdy and support the TV very well.

However, the legs are widely spread across the edges of the television. Thus, if not wall-mounted, you will need a fairly large desk or surface to place the VIZIO D65x-G4.

Turning the VIZIO D65x-G4 over to the back, you will discover a matte-black plastic panel. The ports for this television are distributed on this plastic panel.

To give more details, some ports are side-facing on the TV’s back, while some are down-facing. However, there is no space provided for cable management on the back of the television.

Also, the back of the TV is somewhat thick. As a result, the TV will look kind of awkward if mounted on the wall.

On a positive note, unlike most 65-inch TV, the VIZIO D65x-G4 isn’t particularly heavy. In fact, one person can carry and assemble the TV.

In conclusion, the VIZIO D65x-G4 features a decent design for an affordable 4K TV. Also, despite featuring a thick back panel, this TV weighs less than most competing TVs.

Therefore, it is ideal to rate the VIZIO D65x-G4 an eight out of ten in this design review section.

In modern-day televisions, 4K resolutions are becoming increasingly popular.
This is because 4K resolution allows displays to deliver colorful and accurate picture quality.

Impressively, the VIZIO D65x-G4’s 65-inch display comes with an impressive contrast ratio. To be more specific, the display features a contrast ratio of 5,392:1.

You must be probably wondering what contrast ratio is. Let me briefly explain.

The contrast ratio of a display is the difference between the highest and lowest luminance of the display. Basically, it is the ratio between the brightest white and the darkest black that the display can produce.

Therefore, movies with a significant number of dark scenes will be a joy to watch on the VIZIO D65x-G4.

However, despite its impressive contrast ratio, this television’s display doesn’t support local dimming. For clarity, Local dimming is a technique that LED/LCD displays use to improve their contrast ratio by dimming backlight zones.

This technique makes blacks appear deeper than they normally are. Thus, improving the overall picture quality of the display.

Let me quickly define HDR in a few words. When viewing HDR-supported content, HDR is a picture technology that allows a display to enhance picture quality and contrast.

However, despite supporting HDR, the VIZIO D65x-G4’s display has poor brightness. To be more specific, this display has a maximum brightness of just 211 nits.

As a result, the VIZIO D65x-G4 isn’t ideal for use in well-lit areas. You are better off viewing the TV in a moderately lit or dim room.

Thus, when using this TV in a well-lit room or under direct sunlight, reflections might cause a big problem.

Moving on, the VIZIO D65x-G4’s display comes with very poor viewing angles. Therefore, color accuracy and picture quality will reduce when viewing the television from the sides.

Speaking of color accuracy, when viewed directly from the center, the VIZIO D65x-G4’s display produces some pretty accurate colors. To top that up, this television’s display comes with an impressive response time of 12.1 milliseconds.

Therefore, fast-motion content like sports will be pleasant to watch on the VIZIO D65x-G4. Lest I forget, response time is the amount of time it takes a display to fully transition from one color to another

To add icing to the cake, the VIZIO D65x-G4’s display also has a low input lag of 23.9 ms. Input lag is the time taken for a device’s display to respond to signal inputs.

Additionally, the lower the input lag a display has, the better. You may be wondering what exactly is the benefit of a display having a low input lag?

The primary benefit of a low input lag is that it improves the gaming experience when using the display to play games. To be more specific, since most game consoles use wireless gamepads, the display will take just a few milliseconds to register an input from the gamepad.

Thus, improving the overall gaming experience. With all that being said, it is okay to say the VIZIO D65x-G4 is an ideal television for gamers.

All things considered, I will rate the VIZIO D65x-G4 an eight out of ten in this display review section. 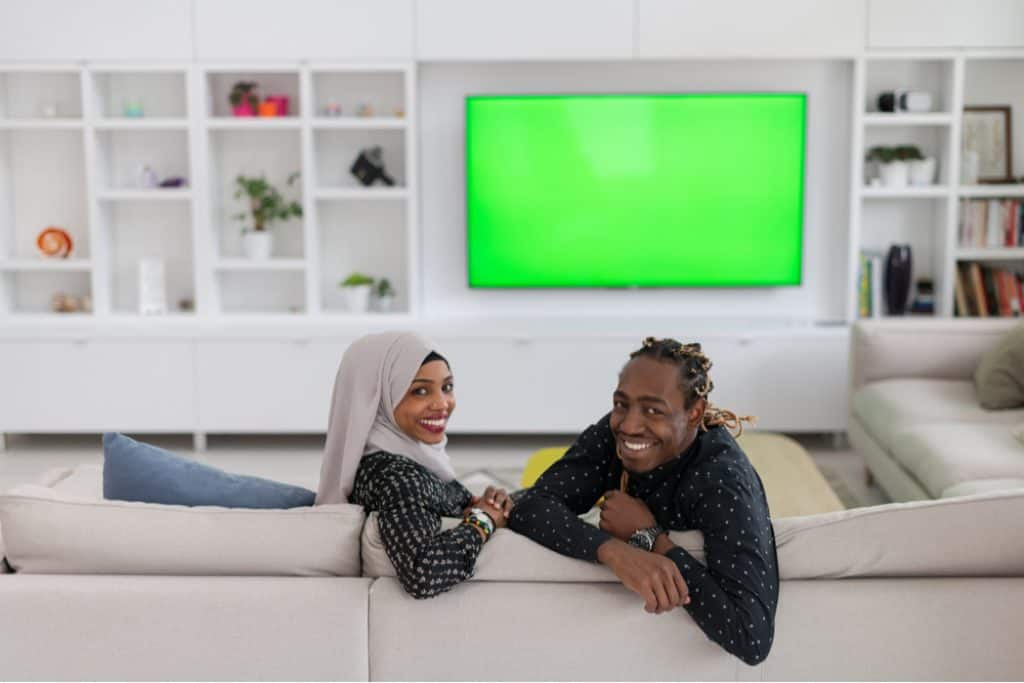 The VIZIO D65x-G4 wouldn’t win any award or even be considered when it comes to the sound department. To be more specific, this TV comes with a pair of 8-Watts speakers that produce somewhat mediocre sounds.

Also, due to the fact that this television lacks a subwoofer, bass is totally absent on the TV. Therefore, watching bass-heavy movies on the VIZIO D65x-G4 isn’t a good idea.

Also, this sound technology allows the VIZIO D65x-G4’s speakers to produce crisp and clear dialogue. Just to be clear, dialogue is the conversation between two or more characters in a movie or TV show.

For clarity, distortion in this context is simply the deformation in an audio signal’s output. In other words, distortion alters the sound production of a speaker causing it to produce less-appealing sound.

In conclusion, dialogue might be clear on the VIZIO D65x-G4, but overall sound output is somewhat poor. Thus, I recommend connecting a soundbar to this television to get much better sound output.

After thorough consideration, I will rate the VIZIO D65x-G4 a seven out of ten in this sound review section. 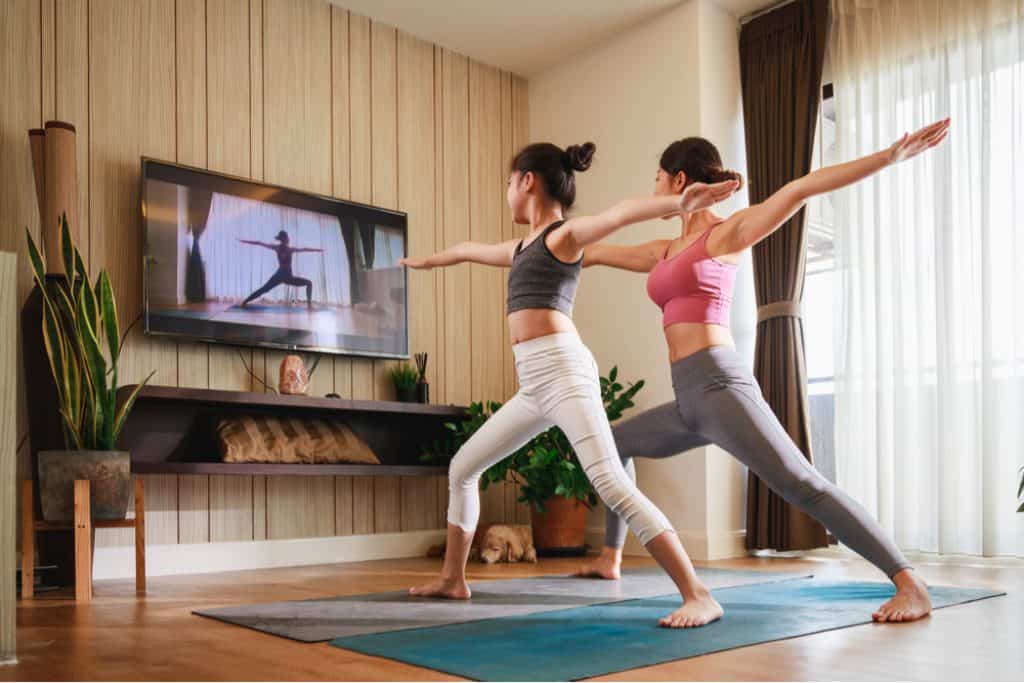 Ports on the VIZIO D65x-G4 are divided into two segments on the televison’s back panel. Specifically, some ports are down-facing, while some are right-facing.

However, the amount of ports on this television is minimal. To give more details, this television has only two HDMI ports, none of which support ARC (Audio Return Channel).

To make matters even worse, this TV doesn’t feature a single USB port. On a positive note, the television comes with a composite video input with L/R audio.

However, the television lacks Bluetooth.

Moving on to the remote, the VIZIO D65x-G4 comes with a basic XRT136 remote control. This remote is made of plastic and has a sleek black finish.

It also includes Amazon Prime Video, Crackle, and IheartRadio. Above these dedicated buttons are the input button and power button.

Impressively, this remote control also comes with a full number pad. Also, there is a “VIZIO” logo finely printed on the bottom of the remote.

All things considered, in this port and connectivity review section, I believe the VIZIO D65x-G4 doesn’t deserve a rating of more than seven out of ten. 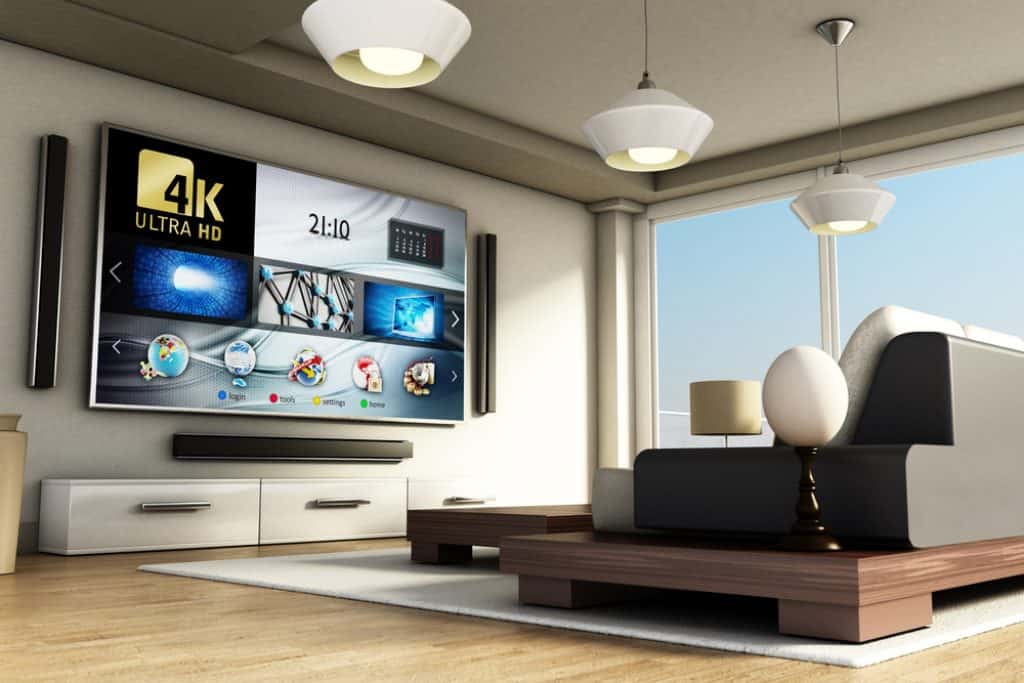 Just like any other VIZIO smart TV, the VIZIO D65x-G4 comes with the VIZIO SmartCast operating system. This operating system features an interface that consists of a settings menu, a full app menu and a quick app menu.

Additionally, this operating system’s interface is user-friendly, simple, and straightforward. This simple interface, however, is affected by stutter and lag.

To give more details, the interface is slow to respond to input, and the animations are a bit choppy. Notwithstanding, the interface is fully functional and does not crash, although navigation will be a struggle.

Moving on, the SmartCast operating system features a few pre-installed major streaming apps like Netflix and YouTube. However, the operating system’s app store has a limited number of apps.

In summary, the VIZIO D65x-G4’s SmartCast OS isn’t particularly impressive, but it is efficient. Besides, the television features an in-built Chromecast to support this operating system.

With all these in mind, I will rate the VIZIO D65x-G4 an eight out of ten in this smart features review section. 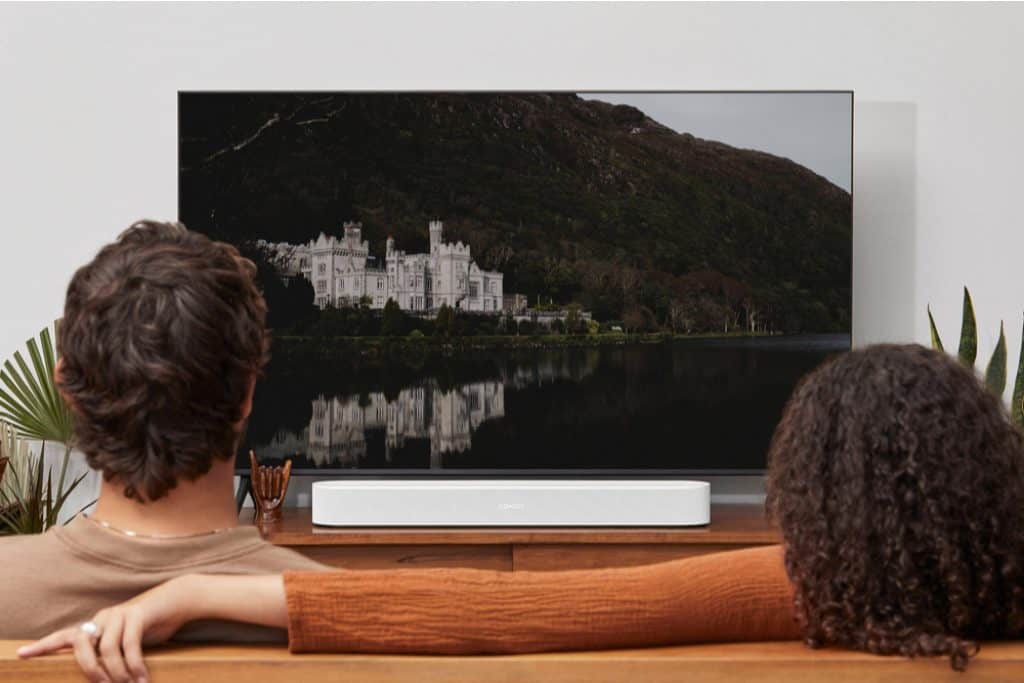 Yes, the VIZIO D65x-G4 is a smart TV that runs on VIZIO’s very own Smartcast operating system. Also, this TV comes with a built-in Chromecast that enables you to stream content from your smart devices to the TV.

Unfortunately, the VIZIO D65x-G4 does not feature Bluetooth.

No, it doesn’t. The VIZIO D65x-G4 comes with a basic non-voice XRT136 remote control.

Yes, there is. The VIZIO D65x-G4 is equipped with an 802.11ac Dual Band WIFI for wireless connectivity. 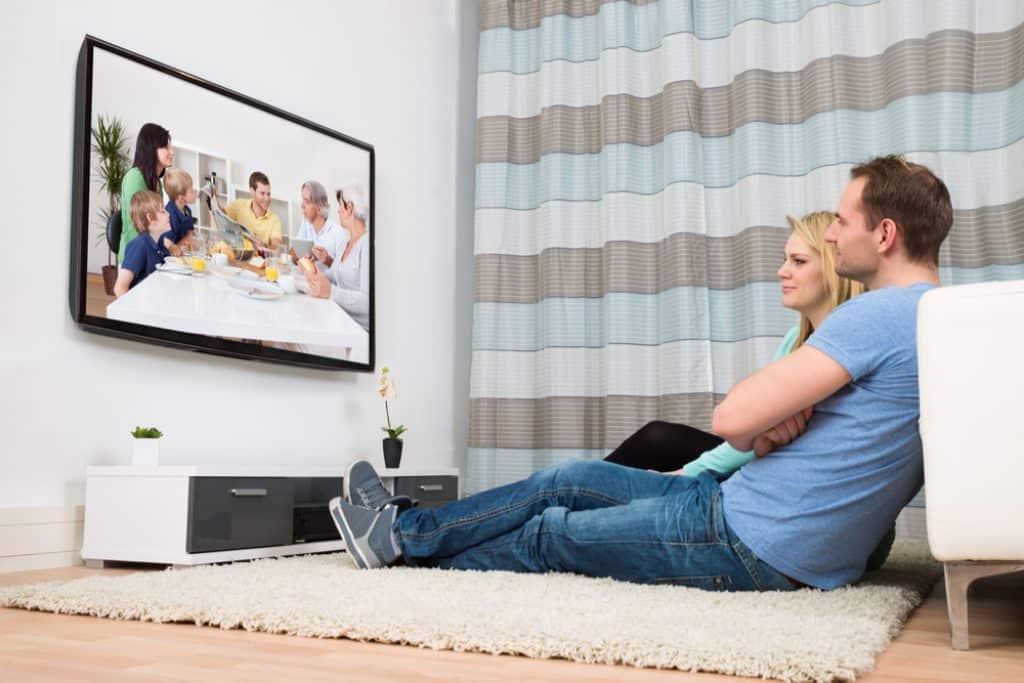 The VIZIO D65x-G4 is a 4K television that comes with a few impressive features. Specifically, this television’s display features an impressive contrast ratio that improves its overall picture quality.

However, there are some major areas where this television lacks. For example, this TV has poor brightness, lacks Bluetooth, and features a small number of ports.

Nevertheless, gamers will appreciate this TV because it features a low input lag. Overall, the VIZIO D65x-G4 has some great features, but its flaws can’t go unnoticeable.

Therefore, if you can live with its flaws, the VIZIO D65x-G4 is worth considering.