People in Sydney, Australia’s biggest city, ignored grey skies and drizzle on Monday to celebrate the end of almost four months of lockdown on Monday as fully vaccinated people were allowed once again to get their hair cut and go to cafes, restaurants and shops.

The city’s more than five million residents spent 106 days in lockdown as the authorities tried to curb the spread of the highly transmissible Delta variant.

With new infections now falling – New South Wales state recorded 496 cases on Monday – and more than 70 percent of people over the age of 16 fully vaccinated, the city is now reopening.

cafés and restaurants threw open their doors to anyone who could prove they were vaccinated, including Peter Morgan, who was among those relishing in newly regained freedoms.

“Even though it’s like freezing outside it’s so good,” the 35-year-old told AFP news agency. “It’s just these little things which offset a lot of the stresses of like being locked down.” 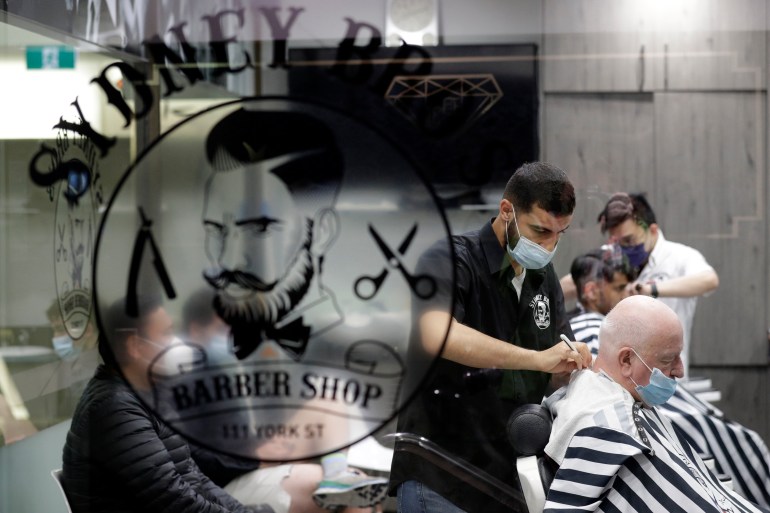 Some pubs opened at 12.01am (13:01 GMT) and friends and families huddled together for a midnight beer, television footage and social media images showed.

Since June, shops, schools, salons and offices have been closed for non-essential workers and there have been unprecedented restrictions on Australians personal freedom with people banned from travelling more than five kilometres (three miles) from home or visiting family.

For most of the pandemic, Australia successfully suppressed infections through border closures, lockdowns and aggressive testing and tracing.

But the Delta variant put paid to its goal of “Covid-zero”, and Sydney and Melbourne are now shifting their approach towards one of “living with Covid”.

“It’s a big day for our state,” Perrotet said.

Some restrictions will remain in force, including limits on mass gatherings and international border closures.

Schools will not fully reopen for a few weeks.

The state aims to hit an 80 percent vaccine rate by about late October, when more curbs will be relaxed. But the unvaccinated must remain at home until December 1.

There remain lingering concerns that reopening will lead to a surge in cases.

As Sydney exits lockdown, it’s a time for hope and optimism. Let’s get on this runway for reopening, and let’s keep going with our vaccinations. Here’s to Australia soon leaving behind this phase of being a parochial, fearful, fortress nation

The Australian Medical Association urged the authorities to keep a close eye on developments.

“The AMA supports gradual opening up of the economy and the loosening of restrictions, but it is critical to observe the impact of each step on transmission and case numbers,” the doctors’ body said.

Australia’s virus-free states such as Western Australia and Queensland, which have much lower vaccination rates, are watching what happens as Sydney reopens.

Australia has fared far better than many other wealthy countries during the pandemic keeping coronavirus numbers relatively low, with 130,000 cases and 1,448 deaths.

Opinion: What a hip-hop star on death row has to do with dictators everywhere

What COVID-19 taught us about risk in a complex, inter-connected world — Global Issues

Swiss self winding watch inspired by the Air Force