While Tom Ford does appear briefly as a character played by Reeve Carney, the film House of Gucci isn’t really about Ford’s time at the house. Most of the action takes place in the decades before Ford arrived, when both the Gucci family and the Gucci label were in a bit of a free fall, but the common knowledge that Gucci’s best days lied ahead is central to the dramatic tension. Those days would eventually come when Ford was promoted to creative director in 1994, and quickly turned the Milanese label into an era-defining force in the late ’90s and early ’00s.

In the decade that Ford spent at the label, he’d go on to dress two Best Actress Oscar winners, champion Jennifer Lopez as a style icon long before others, and clothed Madonna for two of her most triumphant awards show nights. Here, a look back at the best Gucci red carpet moments from the Tom Ford era.

Ford’s first few collections for Gucci could be politely referred to as warm-ups; it wasn’t until his Fall 1995 collection that he truly established his vision for the brand and fashion editors sat up to take notice.

Of course, it was Madonna who gave Ford’s Gucci its first major red carpet moment at MTV’s 1995 Video Music Awards. Ironically, at the time Madonna was hard at work attempting to tone down her image following the controversies from her Erotica album and Sex book, but in the process, she found a new vision for sex appeal that would come to define the ’90s with Ford as its architect. You could not ask for a more perfect red carpet moment to trumpet Gucci’s return. The fact that later on in the night Courtney Love would launch a makeup compact at Madonna like a projectile missile on live television only added a dash of drama to season an already iconic outfit.

Elizabeth Hurley at The American President Premiere in 1995 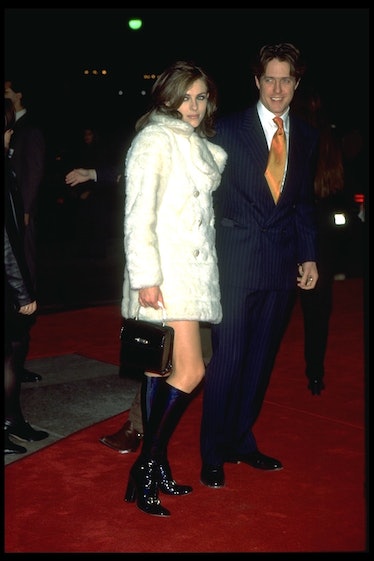 Do people born after the year 2000 fully understand just how important Elizabeth Hurley’s red carpet style was in the ’90s? At the time, she was basically doing the fashion influencer work of all the Kardashians and Hadids combined, so of course she was also an early red carpet adopter of Ford’s Gucci, seen here in a white fur coat while accompanying then-boyfriend Hugh Grant to the premiere of The American President. 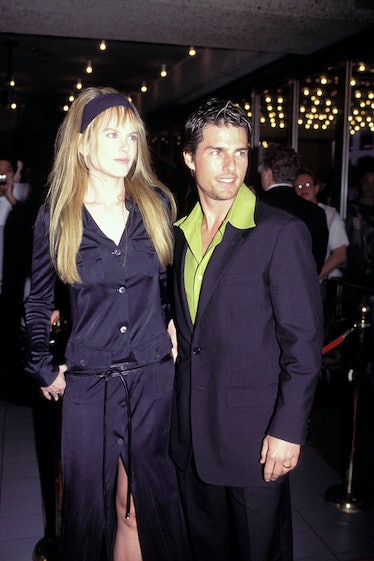 Dressing the most A-List of A-List couples the mid-90s had to offer in matching Gucci was quite a coup. Though, we’ll admit, if you keep on scrolling you’ll find that Kidman arguably made more iconic moments with Ford. Instead, it’s Cruise’s fit that gets us excited here.

Yes, even at Gucci, Ford would come to excel at designing the kind of sleek tuxedos perfect for any awards show’s red carpet that would later define his namesake brand. Though, Cruise’s suit here was more in line with the vision for men Ford was presenting on the runway: a provocatively unbuttoned collar, a pop of bold color, and hair gelled into messy perfection.

Gwyneth Paltrow at the MTV VMAs in 1996 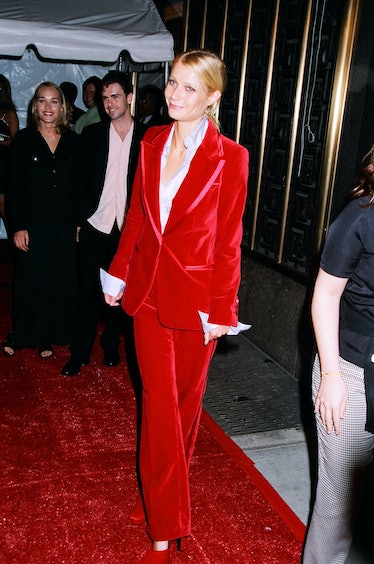 In the ’90s, Paltrow and Madonna had yet to become the besties they would become in the early ’00s, but it seems fitting that when Madonna signaled that Ford’s Gucci was the hottest label in the land at the 1995 VMAs, Paltrow confirmed at the event next year in this iconic red suit. In fact, current Gucci creative director Alessandro Michele just reinterpreted the outfit, which, of course, he had Paltrow wear again. 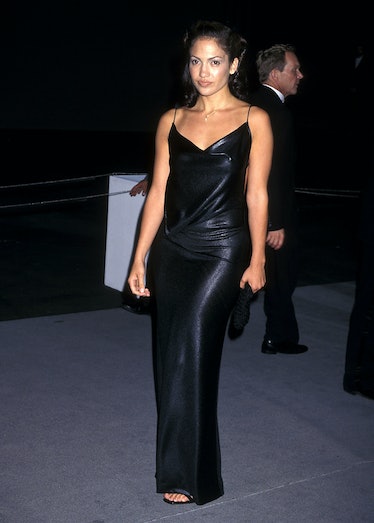 It’s 1997, and Jennifer Lopez isn’t quite the icon she’s about to become. We’re still a few years away from her music career and that famous Versace dress, but Ford saw Lopez’s appeal early, and dressed her in this custom Gucci outfit to attend a benefit dinner he hosted in Los Angeles. 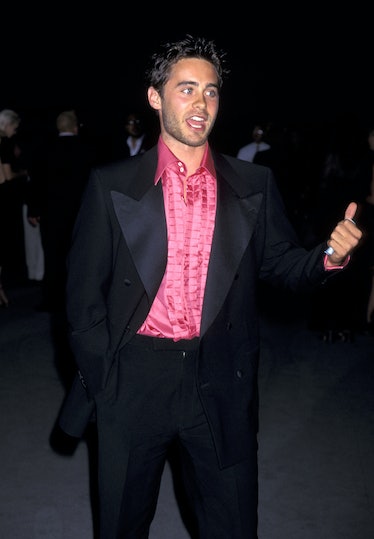 Leto is both a cast member of House of Gucci and an official muse of the actual house of Gucci under Alessandro Michele, but this was his first experience with the fashion label. 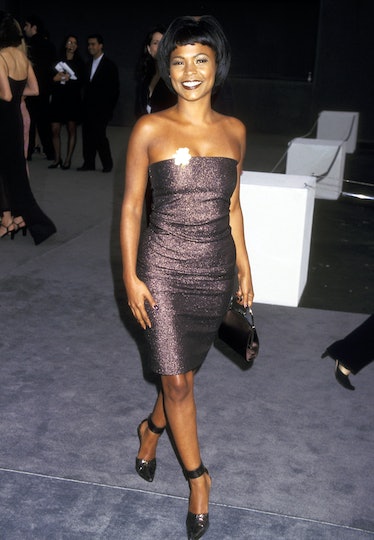 Yes, this party seemed to have served as Ford’s first demonstration of fashion power in Los Angeles. Long also attended in one of the key looks from the spring 1997 collection. 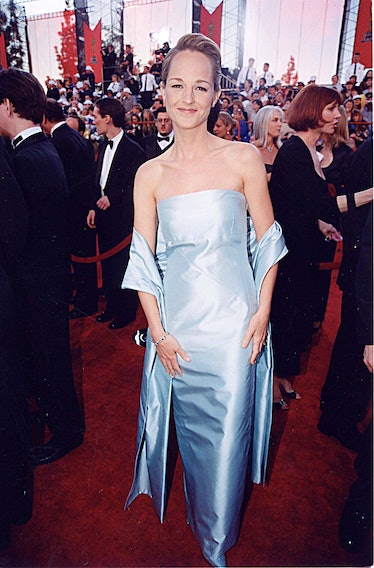 Any legendary red carpet run includes dressing a Best Actress winner at the Oscars, and Ford got his first when Helen Hunt wore this pale blue gown to collect her trophy for As Good As It Gets.

Madonna at the Grammys in 1999 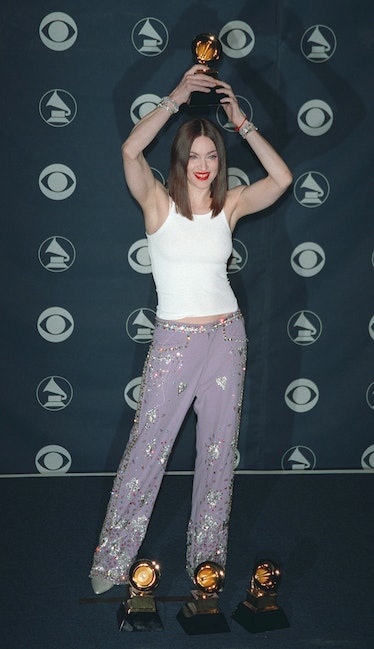 After her major Gucci moment in 1995, Madonna returned to the label in 1999 for a pair of bedazzled, lilac pants she wore with a simple white tank to the Grammys. Running high off the success of Ray of Light, it would be Madonna’s biggest night at the awards show ever (and, oddly, the first time she actually won a Grammy for her own music).

Gwyneth Paltrow at the Met Gala in 1999 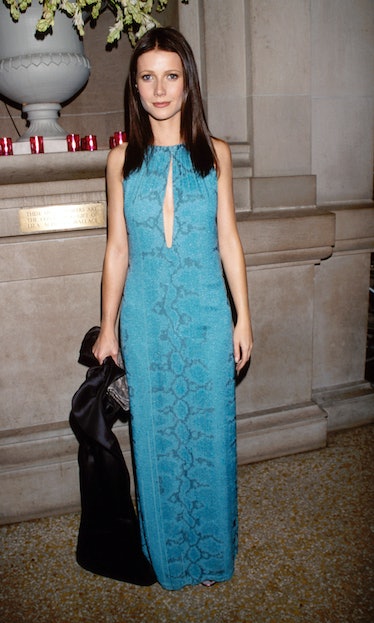 The 1999 Met Gala (held in December then) was simply themed “Rock Style.” Ok, sure… Given those parameters, Paltrow’s snakeskin-print Gucci dress was an obvious highlight.

Jennifer Lopez at the Vogue/VH1 Fashion Awards in 1999 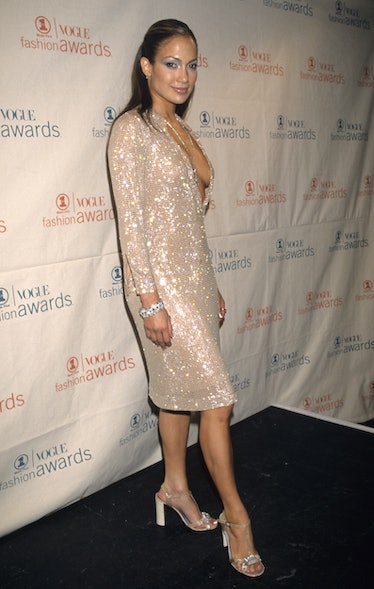 Still, images likely do not give full glory to the sparkly Gucci dress J. Lo wore in 1999. When Rihanna walked down the red carpet in her own sparkly dress at the 2014 CFDA Awards, many instantly had flashbacks to this Lopez number. 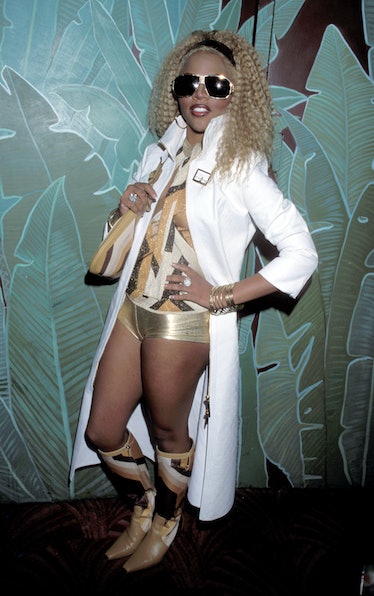 In her music videos and photoshoots, Lil’ Kim was constantly in Gucci. For party for the Wyclef Jean Foundation, she wore a matching top, boots and bag from the fall 2000 collection.

Kate Winslet at the Holy Smoke premiere in 2000 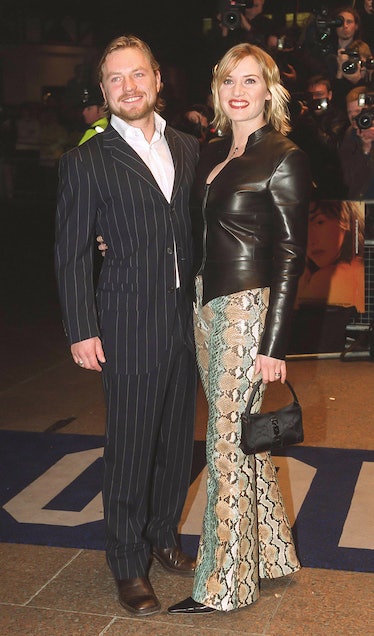 The flared snakeskin pants Tom Ford sent down Gucci’s spring 2000 runway were simply era-defining. Produced for both men and women in multiple colors, these were a hit amongst fashion editors and customers. Though, perhaps most actresses at the time considered them a bit too casual for the red carpet. Kate Winslet notably thought otherwise for this premiere London.

By the way, Kim Kardashian has since hunted down multiple pairs of these pants and appears to treasure them as day-to-day wear. She’s been spotted in them multiple times.

Joan Allen at the Independent Spirit Awards in 2001 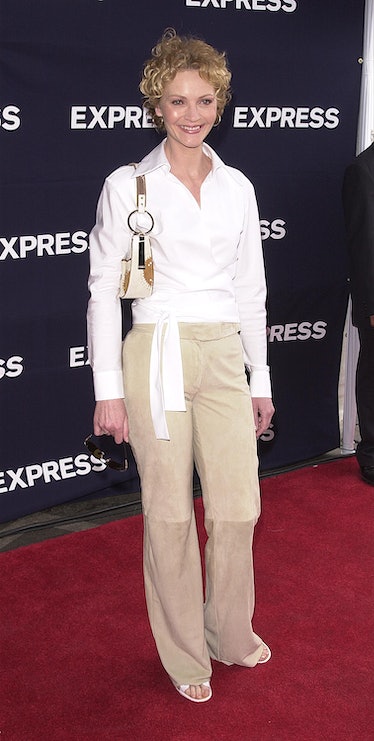 It’s easy to think that Ford’s Gucci was all shiny fabrics, strategic cutouts, and va-va-voom, but he could also turn out a sort of refined casual wear that would have Ralph Lauren shaking, as evidenced here by the Gucci fit Joan Allen wore to the 2001 Independent Spirit Awards. 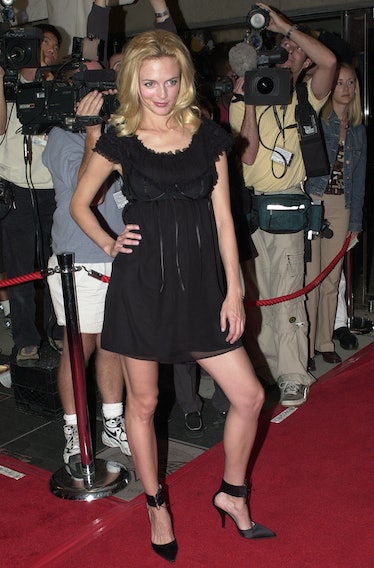 What can we say? The leading ladies of the Austin Powers franchise loved Gucci. Graham wore this black baby doll dress from the fall 2001 collection to the Toronto International Film Festival. 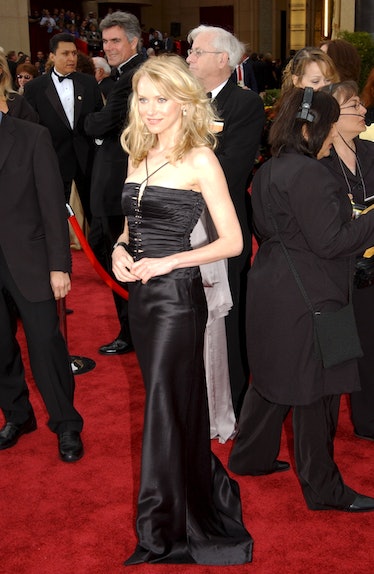 Nicole Kidman at the SAG Awards in 2003 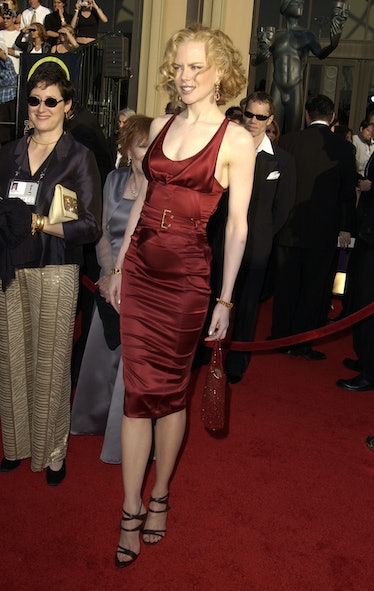 Recently several contemporary celebs have dug into the archives to find little red dresses from Gucci’s spring 2003 collection, but none of them have done it quite as well as Kidman did at the 2003 SAG Awards.

Nicole Kidman at the Met Gala in 2003

For the 2003 “Goddess”-themed Met Gala, Ford served as co-host alongside Nicole Kidman making for an unforgettable red carpet moment. 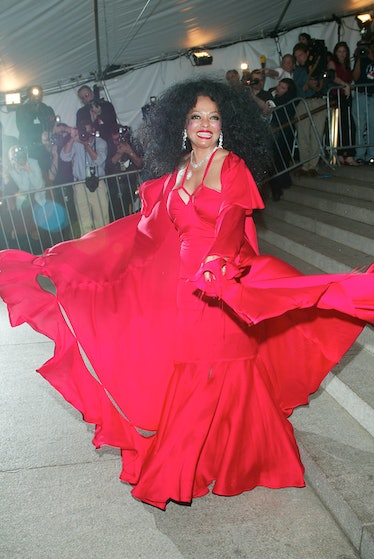 The iconic Diana Ross also wore Tom Ford for the 2003 Met Gala, though her outfit mixed together pieces from both Gucci and Yves Saint Laurent (for whom Ford was also designing at the time). 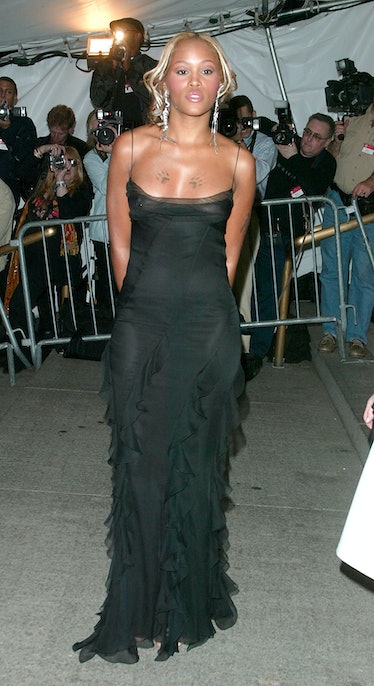 With Tom Ford hosting (and Gucci sponsoring) of course there were several attendees in his designs that night. Eve looked divine in this bias-cut black dress.

Sarah Jessica Parker at the Tony Awards in 2003 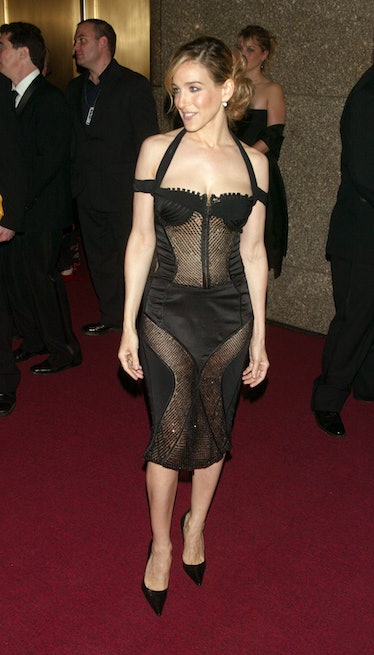 In 2004, Sex and the City would go off the air and Ford would leave Gucci, but thank goodness Sarah Jessica Parker got a solid Gucci red carpet moment in before all of that. Think of a world where SatC-era SJP didn’t wear Tom Ford-era Gucci? Unthinkable.

Halle Berry at Gothika Premiere in 2003 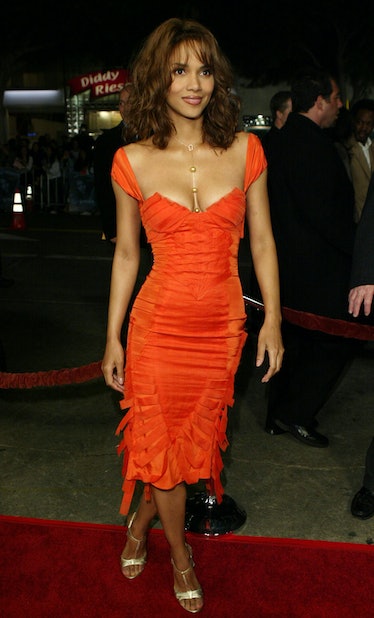 Halle Berry exemplified the Gucci look of the early ‘00s by stepping out in this orange cocktail dress. 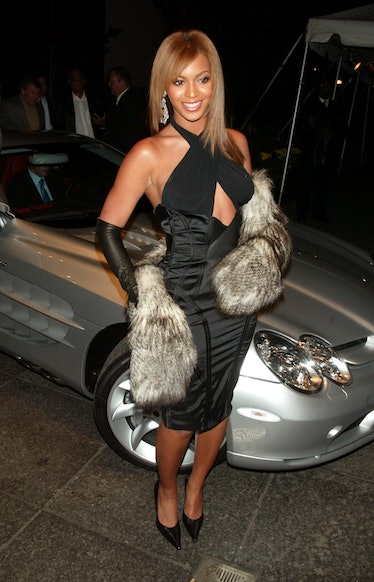 Destiny’s Child was still an ongoing concern, but when Beyoncé stepped out to test the solo star waters in 2003 she differentiated her style largely by wearing numerous looks from Gucci.

Photo by SGranitz/WireImage for NARAS 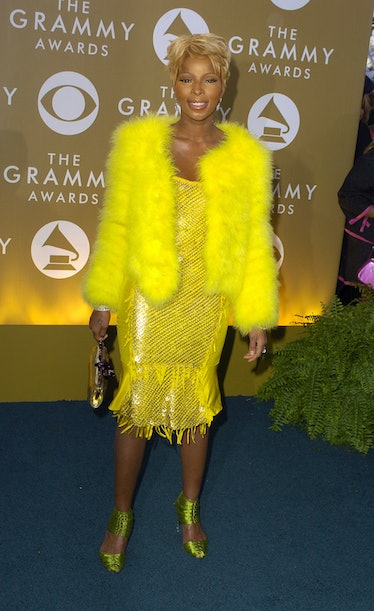 We distinctly remember one of the catty fashion commentators (Was it Joan Rivers?) saying that it looked like Mary skinned Big Bird. Pure hateration. Mary looked great.

Charlize Theron at the Oscars in 2004 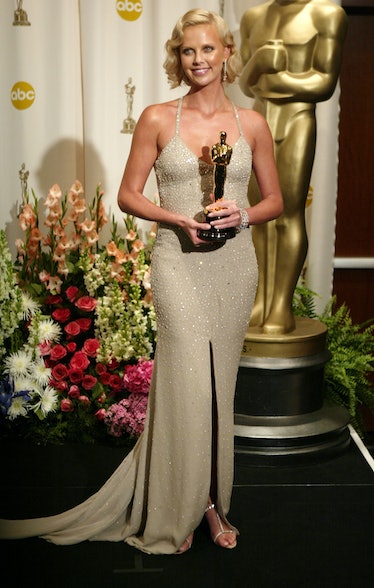 Ford shocked the fashion world in 2004 when he announced he was leaving Gucci, but he got one last major red carpet moment in and boy was it divine. Theron wore a golden Gucci gown to accept her trophy at that year’s Oscars. 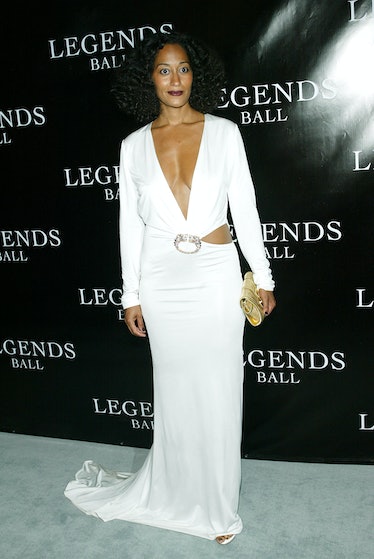 Of course, even after Ford left the label, celebs would still find occasions to wear his designs from the time. It was a phenomenon that started as early as 2005 when Ross pulled this white dress to wear to Oprah’s Legends Ball.

How to Pack a Backpack For Hiking