A disturbing video posted to social media on Sunday shows the horrifying moment a prison gang beat a schizophrenic inmate unconscious with everything they could get their hands on – including an industrial broom and a microwave.

Video of the brutal beating, posted to Facebook by ‘Derrick L. Transportation,’ shows Jayshawn Boyd, 22, standing in a common area of the Essex County Correctional Facility on September 23 when a group of seven inmates in white start beating him.

Guards made no attempt to stop the horrific attack.

The assailants gather around Boyd and start punching him, as he falls to the ground.

At that point, one of the men could be seen holding an industrial broom, which he uses to hit Boyd with as the other inmates continue to punch him and stomp on him.

Soon, all of the inmates scatter, apparently trying to find other objects they could hit the victim with. 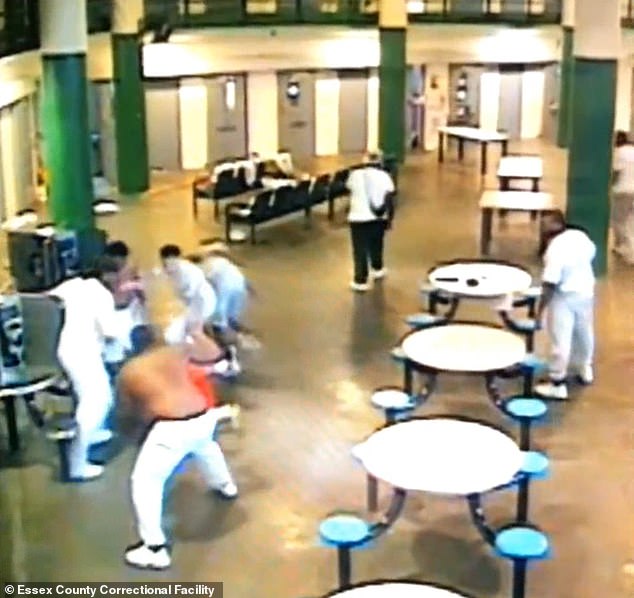 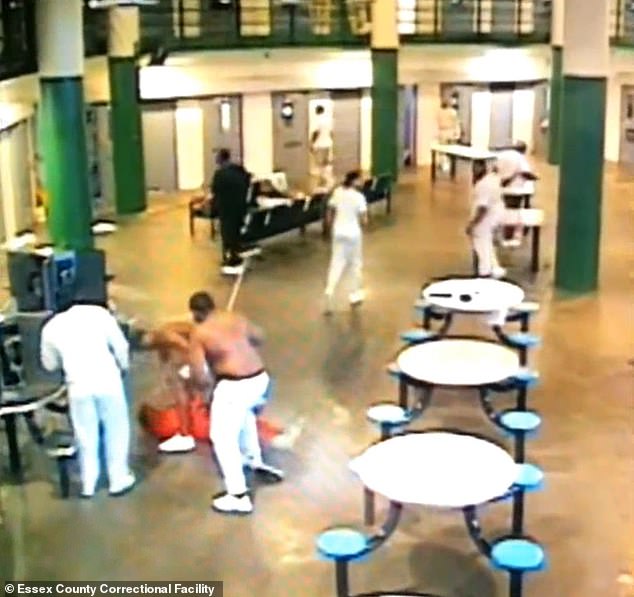 They punched him and kicked him, with one man grabbing an industrial broom to hit him with 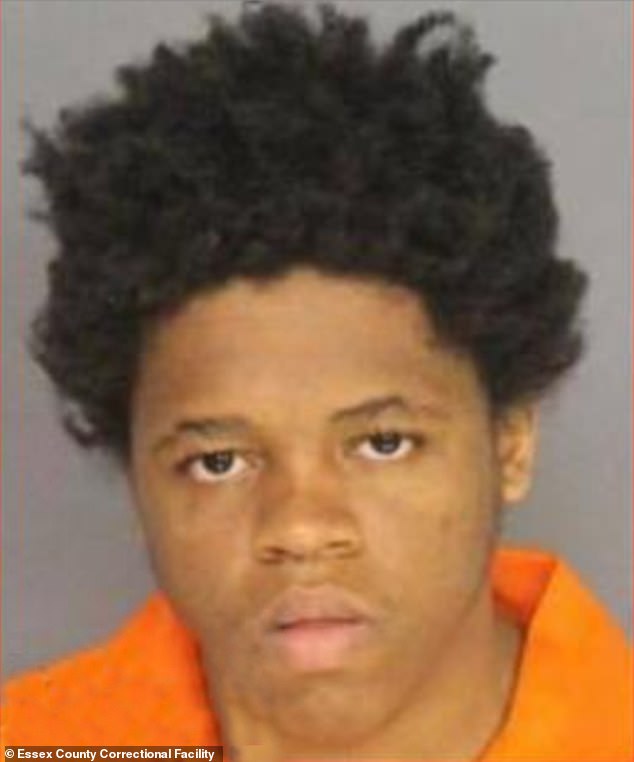 Jayshawn Boyd, 22, was brutally beaten at the Essex County Correctional Facility in New Jersey by seven inmates in the ‘gang unit’ on September 23

One man comes out of a supply closet with a bucket full of mop water that he dumps on Boyd, while another stomps on his head.

The device lands on Boyd’s head.

Others soon join in, throwing whatever they can at the victim.

The two-minute long video ends with one of the inmates running up to Boyd, not moving on the ground, with blood splattered around him, and hitting him once again with the broom stick.

It remains unknown what started the attack. 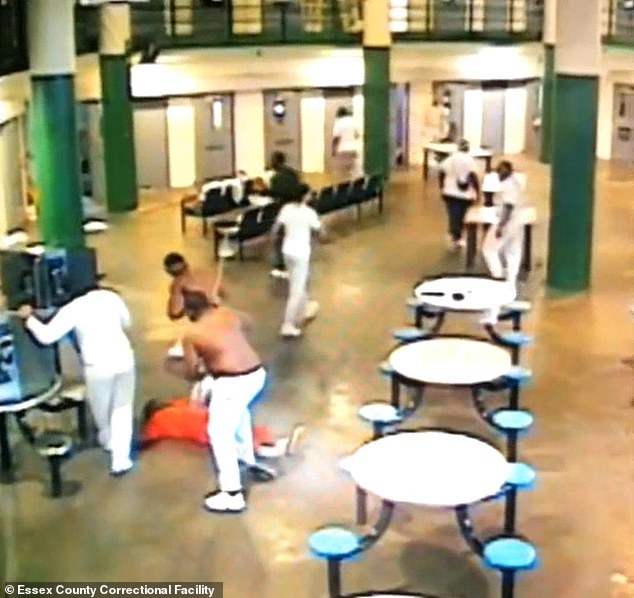 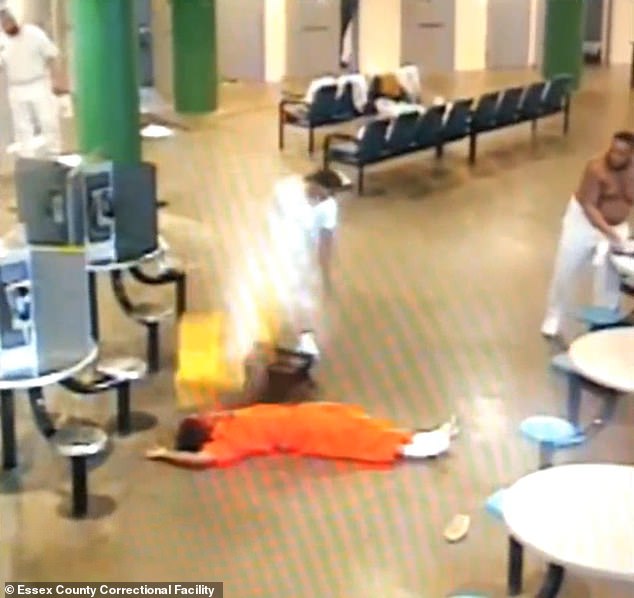 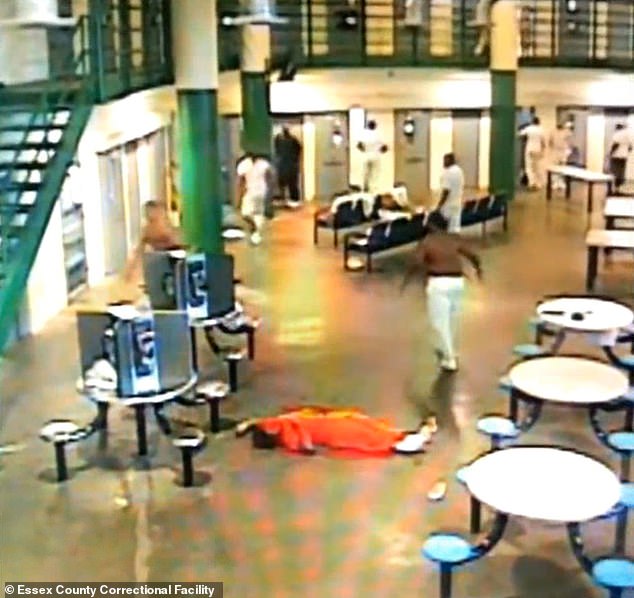 Soon, the men scattered to find anything they could to hit him with

‘That’s something we don’t know at this point,’ Michael Thomas Licciardi, an associate attorney for Brooke Barnett, who represents Boyd, told The New York Post on Monday.

‘It appeared to be pretty quick, within minutes of him getting into the common area.’

He noted: ‘We just received a copy of the video from a family member, who received it anonymously.’

Licciardi continued to say that Boyd’s hands were clearly up when five of the men in the video start attacking him.

Boyd’s lawyers filed a tort claim late last month against Essex County officials claiming that correctional officers violated Boyd’s Constitutional rights against cruel and unusual punishment by putting him in a ‘gang unit’ – even though Boyd is not a member of any gang.

Boyd was taken into custody at the jail on September 9 for two domestic altercations involving his mother and his brother.

In May, Boyd – who suffers from schizophrenia – was transferred from the Essex County jail to Ann Klein, a psychiatry hospital, as he awaited sentencing and a trial for the domestic assaults, NJ.com reports.

He was released pending sentencing, and was set to plead guilty to criminal mischief and unlawful possession of a weapon, but he failed to appear at his sentencing on July 28.

Boyd later surrendered on a bench warrant at the Union County courthouse and was sent to Essex County jail.

The men were charged attempted murder, aggravated assault and third-degree rioting in the brutal beating in October, but their cases have yet to go before a grand jury, the Post reports. 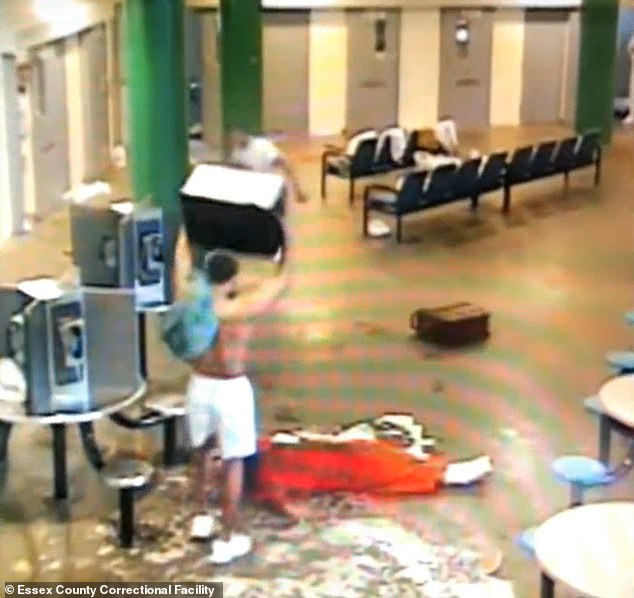 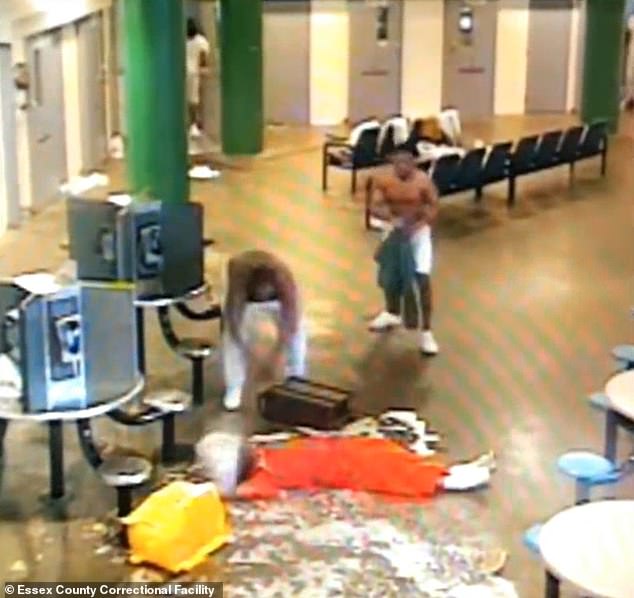 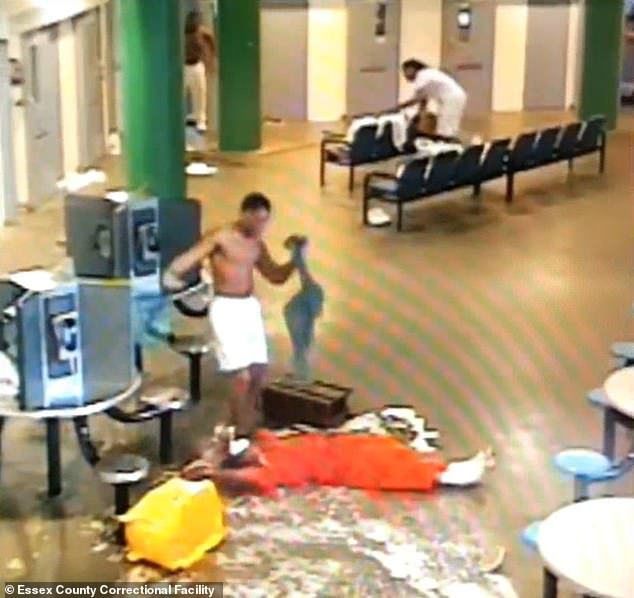 Throughout the entire altercation, Boyd’s attorneys note, no corrections officers were seen trying to stop the brawl.

‘On top of how truly disturbing the footage is, it’s equally disturbing to see no involvement of any kind of corrections officers,’ Licciardi said, noting ‘the attack goes on for multiple minutes.

‘It’s a conscious lack of intervention,’ he claimed.

Boyd’s lawyers say jail officials were ‘deliberately indifferent’ to the beatdown in the notice of claim filed last month, alleging that negligence and improper training by the Essex County Department of Corrections prompted the attack.

‘Damages in this matter are continuing and are yet to be determined as the extent and permanence of Mr. Boyd’s injuries are as yet unknown,’ a letter attached to the filing reads.

Essex County spokesman Anthony Puglisi told NJ.com county officials do not comment on matters that are currently under investigation.

WWE Rumors: Details on nixed plans for The Rock’s return at Survivor Series

Choosing the Right One for Your Business –