No one does Halloween better than celebrities. Most likely, that’s thanks to their glam squads, stylists, and large budgets. While the rest of us are scouring thrift stores and Amazon to come up with a creative enough costume, your favorite stars have a team of people working with them to come up with envy-inducing looks and a photo shoot to match. Of course, not all celebrities go full glam for the holiday, and you always have the ones who throw on a dinosaur onesie or a pair of cat ears and call it a day. But if a celeb is attending an event like the Casamigos Halloween party, or Heidi Klum’s annual fete, then chances are, they’re going all out.

Halloween costumes allow for the opportunity to see a different side of even the most stoic celeb—to find out what shows and movies they watched over the year (they may dress like Vecna from Stranger Things, or a gaslit housewife from Don’t Worry Darling) or what trends and memes they tapped into (a sexy Negroni Sbagliato would make for a great topical costume). Some celebs like to go meta and pay tribute to other famous faces, like Rihanna, who won Halloween last year with her Gunna costume. So, keep checking back here as we compile all the Halloween looks celebs delivered this spooky season.

Addison Rae as Lady Gaga at the 2009 VMAs

OK, we need this movie ASAP.

The artist fully transformed into the cartoon character for Instagram.

Lori Harvey as Beyoncé in the “Me, Myself, and I” Music Video

Ciara and Her Daughter as Venus and Serena Williams

The mother-daughter duo recreated the Williams’ Got Milk ad.

Likely thanks to the Hulu show, Pamela Anderson and Tommy Lee Jones are proving to be one of the most popular couples costumes of the year.

The singer went all out with her costume, which she shared on Instagram.

Kylie Jenner as the Bride of Frankenstein 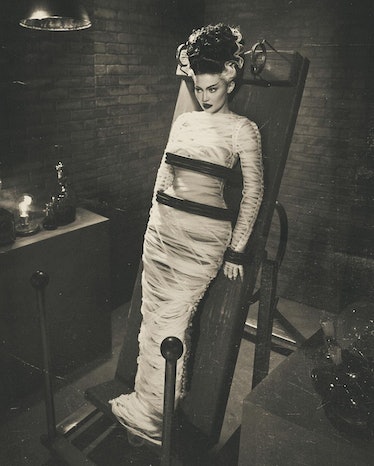 Kaia Gerber as Trinity from the Matrix 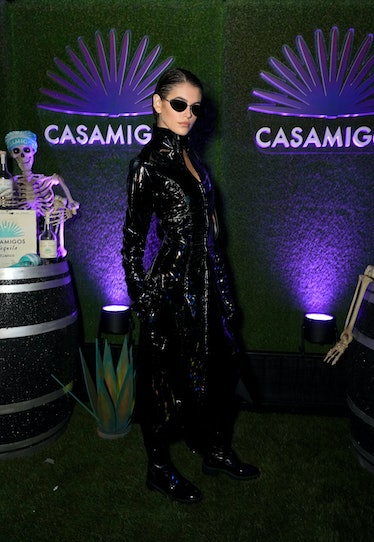 Honestly, though, she could have worn this look on any given day and it would look chic.

Elle Fanning as the Bride of Chucky

And yes, that’s her boyfriend, Max Minghella under the Chucky mask.

Randee Gerber and Cindy Crawfors as Characters from 1883 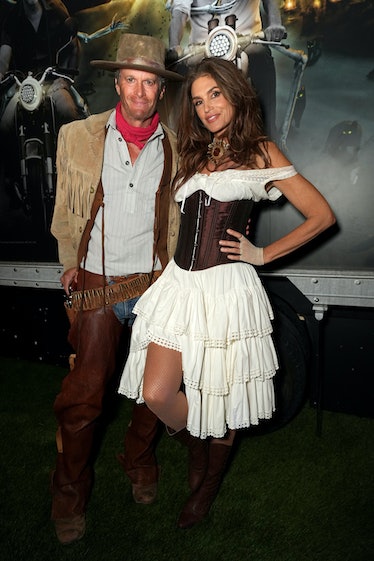 Cleary the two are big fans of the Yellowstone spin-off.

Chrishell Stause as a Skeleton 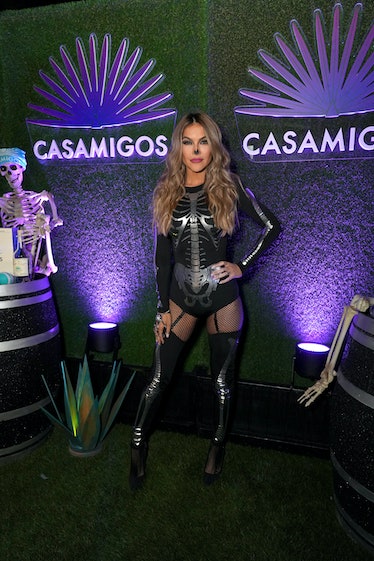 The Selling Sunset star attended the Casamigos party with her girlfriend, G-Flip, 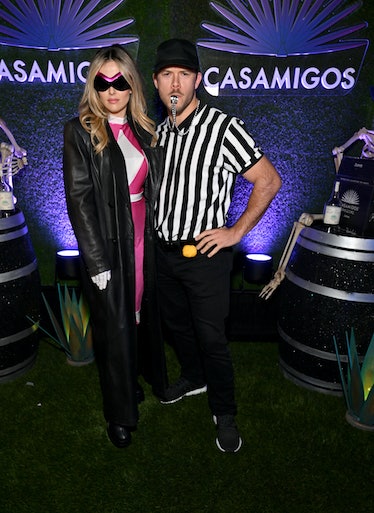 The couple attended the Casamigos Halloween party together.

Not only did Grande and Gillies dress up like characters portrayed by Jennifer Coolidge, Jane Lynch, Eugene Levy, Catherine O’Hara, Larry Miller, and Linda Kash, but they also acted out full scenes from the film.

Vanessa Hudgens as a Black Swan 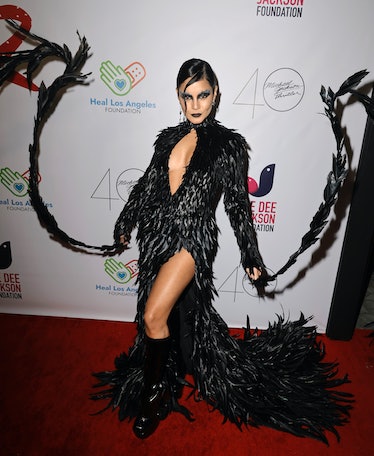 The actress showed up to Prince Michael Jackson’s THRILLER NIGHT Halloween Party as a Bird of Prey.

The actress did double duty while lip syncing to Britney Spears and Madonna.

Maria Bakalova as a Dark Angel 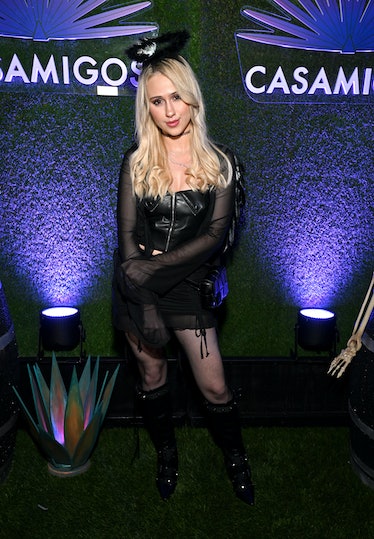 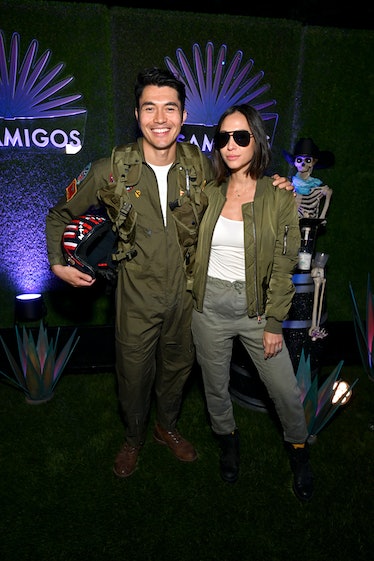 While most kids their age are dressing up like princesses and firefighters, the West kids embodied iconic artists for their first Halloween costume this year. Kim Kardashian shared photos of her kids’ looks on Instagram, where each of them are wearing a classic outfit to represent their respective musical artist. 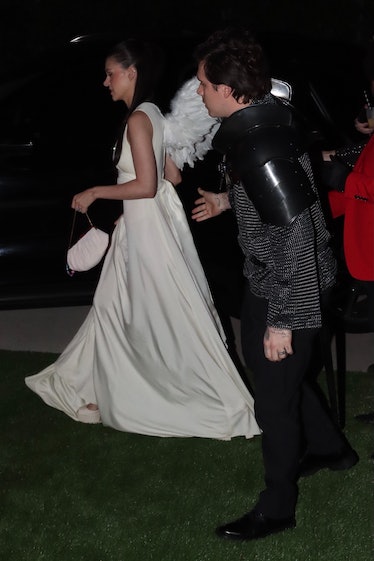 It looks like Doja dressed up for an evening of painting her nails and watching an Elvira movie. 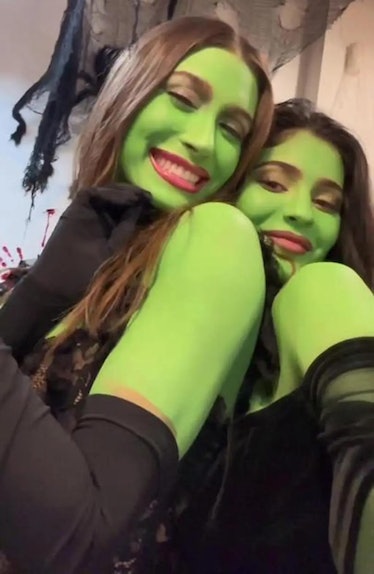 The friends painted themselves green to film a Halloween episode of Bieber’s YouTube show.

Ashley Graham as a Y2K Angel 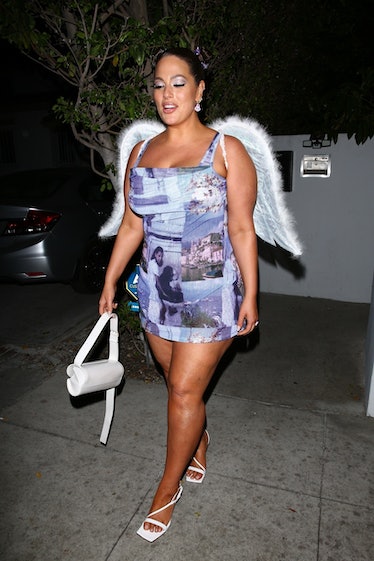 Proof that sometimes all you have to do is throw on a pair of angel wings.

Vanessa Hudgens as the White Swan

Knowing Hudgens, this look is just the beginning.

This article was originally published on 10.27.22