On this week’s Ref Watch, Dermot Gallagher reviews a string of similar ‘denial of an obvious goalscoring opportunity’ incidents – better known in refereeing circles by the acronym ‘DOGSO’ – from the Premier League this weekend.

INCIDENT: Ezri Konsa was sent off early in the second half for Aston Villa after pulling Jarrod Bowen to the floor just outside the area. There was a lengthy VAR review, during which referee Chris Kavanagh checked the pitchside monitor, and Konsa was eventually shown a red card.

“Is Ashley Young able to catch him? I would suggest not. It fulfils the criteria so it is an obvious goalscoring opportunity because he has a clear run at goal, he could have a clear chance and because I don’t think a defender would catch him.

“The difficulty is there are so many factors that VAR had to check. VAR had a really tough time with this incident for the whole passage, and when Chris Kavanagh saw it, he may have felt the ball was running away and he wasn’t sure at what point Bowen had got the ball.

“When you have the luxury of seeing it sideways-on and seeing all the players in the picture, which he can’t see, the three criteria were fulfilled. I think (VAR) Stuart Attwell did remarkably well on this – he logged everything, told Chris to go and have a look. There’s no obligation to send him off, he retains all the options, but the VAR is only going to send the referee to the monitor because he thinks there’s a clear and obvious error.” 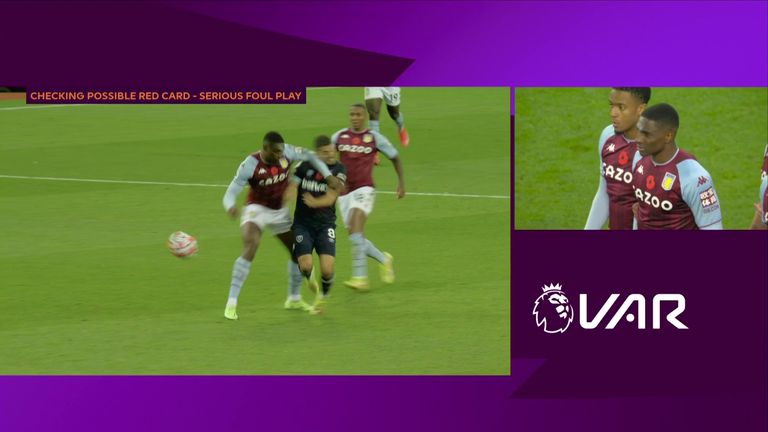 INCIDENT: Just before the Konsa red card incident, there was another coming together in midfield. Kortney Hause stood on Pablo Fornals’ foot before catching him with an elbow, sending the West Ham man to the floor.

The incident was reviewed in the same VAR check, but neither the referee nor VAR felt it warranted a red card.

DERMOT SAYS: “I felt for VAR and Stuart Attwell with this because there was so much happening in this move… Hause stands on his foot and then catches him with his arm, then it goes on and there’s the Bowen incident.

“What Stuart has to do then is go through the first one, then he checks the second one and recommends that Chris goes to the screen. The dilemma there is he thinks the [Konsa] one is definitely a red card, the [Hause] one many people think is a red card too, many others think a yellow.

“On that basis, he spoke to the referee and felt that he had seen the tackle on the foot and the arm was already up and he ran into it. On that basis, he can’t recommend a yellow card, he’s got to go red or nothing so he elected to go with the referee’s on-field decision.

“He could have recommended the referee show two red cards, that’s feasible, but it shows you that if the referee plays the advantage, he’s the one at risk because if he had stopped the game, Bowen and Konsa wouldn’t have happened.”

INCIDENT: There was a similar incident at the Etihad. Aymeric Laporte was sent off for a challenge on Wilfried Zaha in first half injury time, penalised for denying him a clear goalscoring opportunity. 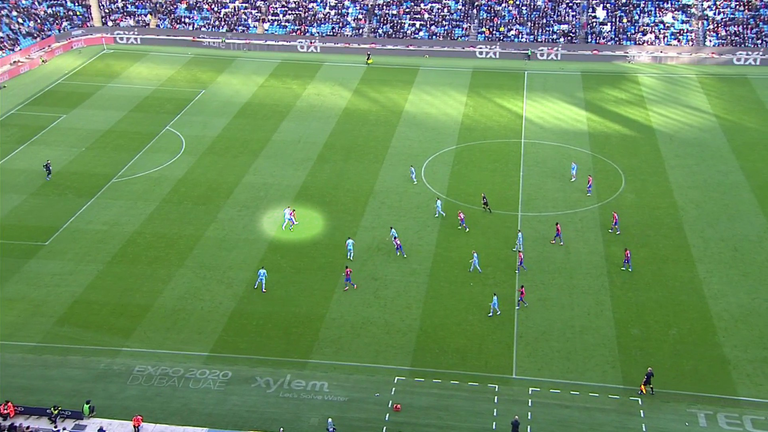 “Is it too far from goal? I think not because he’s fast, he’s got no obstacles at all. Is he going to be caught? Kyle Walker is fast, and you could say he is the covering defender. But once Zaha gets the ball, he’s going to go directly at goal so they would have to intercept him somehow.

“I think it ticks all the boxes and if he hadn’t have been sent off, we would’ve been asking why.”

FREE TO WATCH: Highlights from Arsenal’s win at Leicester

INCIDENT: During the second half at the King Power Stadium, Jonny Evans pulled Pierre-Emerick Aubameyang to the floor as the striker looked to be through on goal. However, on this occasion, the referee only showed a yellow card with VAR not recommending a sending off.

DERMOT SAYS: “It was an error of judgement [to not send Evans off] because of where the referee’s start position is. He’s looking down the barrel of a gun so when the ball drops, he doesn’t know the distance between Aubameyang and the ball. “Once Aubameyang spins him, you go through the questions. It’s most definitely a foul, he’s not in control of the ball but he will be and there’s a clear path to goal. I think the referee’s position dictated his judgement and he made the wrong decision.

“VAR checked it and we don’t know the conversation with the referee. If he said he felt like it was a yellow card because of so-and-so, the VAR checks it, the subjective decision comes in and they decided backed the referee’s on-field decision, but I feel like it was wrong.”

5 Tips for Designing your Room on a Budget –