Crazy Rich Asians introduced Michelle Yeoh to a new generation of fans, but the actress has been hard at work since the ‘80s. The Malaysian-born actress started her career in martial arts films (where she did her own stunts, by the way) for a while before making the move to Hollywood with a major role in the 1997 James Bond movie Tomorrow Never Dies. From Crouching Tiger, Hidden Dragon to Star Trek: Discovery, Yeoh has been on both the big and small screen for decades, working the red carpet the whole time. Since her role in Crazy Rich Asians, though, Yeoh has seemingly found her style niche, and it can be summed up with just two words: royal glamour. The actress loves gowns fit for a queen, sparkling, off-the-shoulder pieces, often with an attached cape detail. It’s because of that preference that Yeoh usually taps Elie Saab for her premieres and events. In honor of the actress’ 60th birthday, let’s take a look back at over 20 years of red carpets to see how Yeoh’s style has evolved.

Yeoh stepped out of her comfort zone in a crinkled satin Balenciaga dress at a party celebrating the brand’s couture show in Paris. 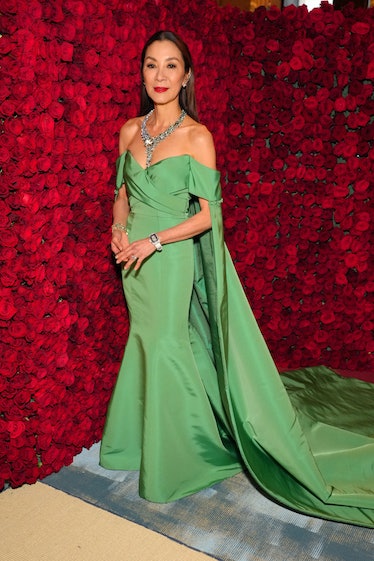 This Prabal Gurung caped, off-the-shoulder gown was made of completely upcycled material.

2021: Shang-Chi and the Legend of the Ten Rings Premiere 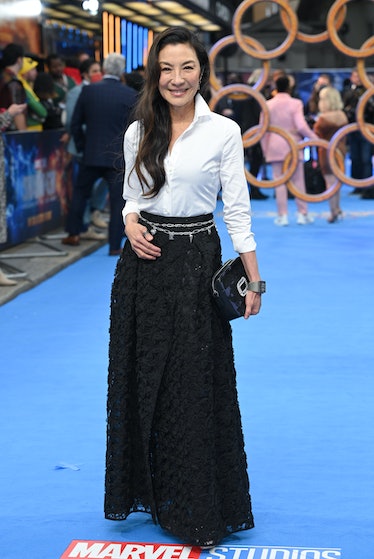 Yeoh paired a simple PYE button down with a black lace Shiatzy Chen maxi skirt, which she accessorized with a layered chain belt, Richard Mille watch, and Roger Vivier clutch. 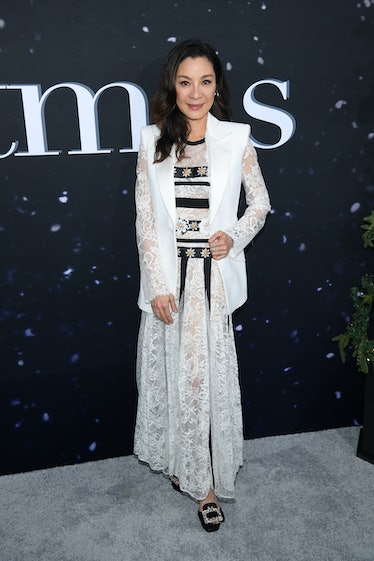 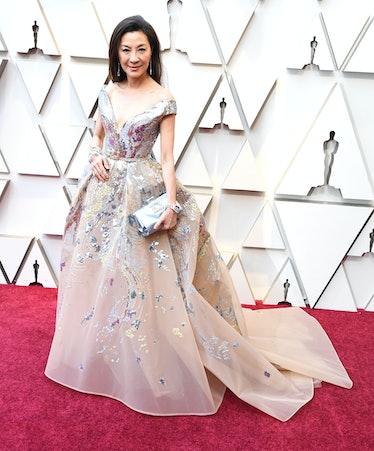 Yeoh brought the glamour to the 91st annual Academy Awards with this Elie Saab spring 2019 haute couture gown, which she accessorized with Chopard jewels. 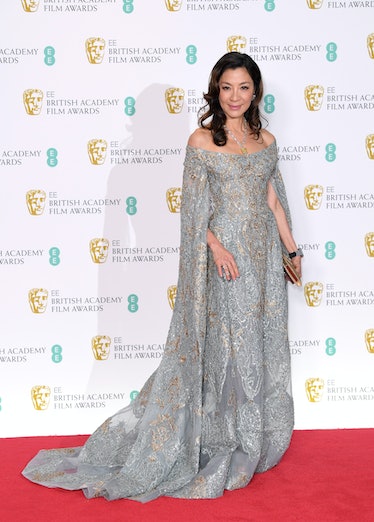 The only thing Yeoh loves more than an off-the-shoulder silhouette is sparkles, which is why this Elie Saab fall 2017 haute couture dress was the perfect choice for the actress. 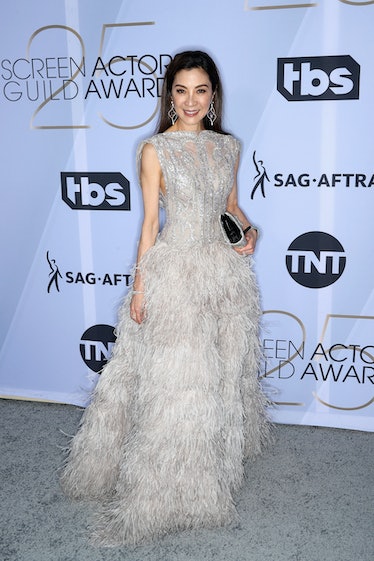 Yet again, Yeoh tapped Elie Saab to dress her for a red carpet, this time choosing a feather-covered, embellished gown from the designer’s spring 2018 haute couture collection. 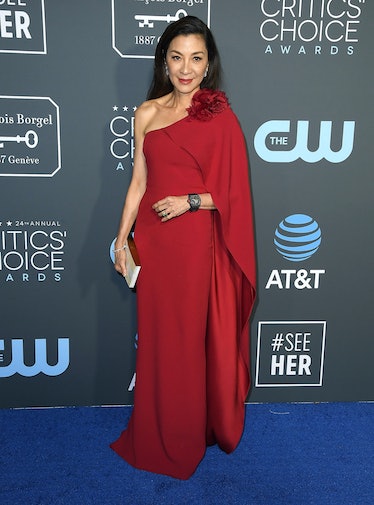 Yeoh wore a one-shoulder red, Marchesa gown with a cape detail and floral appliqué to the 2019 Critics’ Choice Awards. 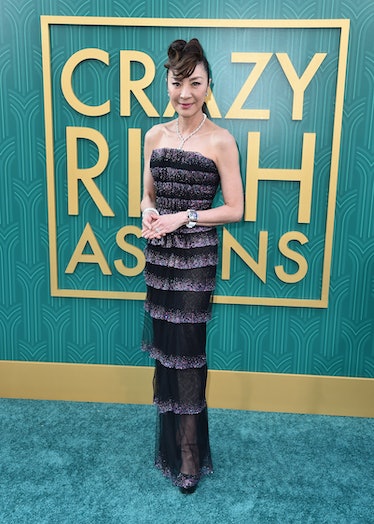 For the premiere of Crazy Rich Asians, Yeoh paired a tiered Armani Prive fall 2017 dress with a unique, forehead-skimming updo. 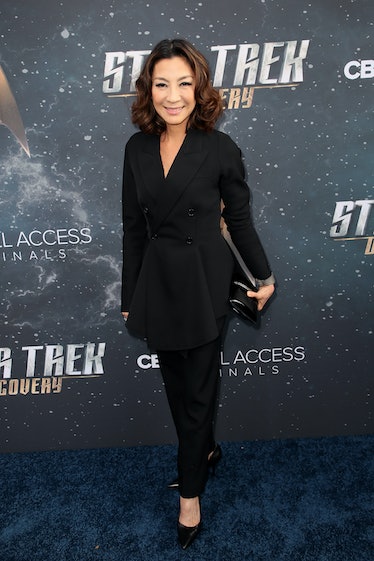 Yeoh kept her look simple for the Star Trek: Discovery premiere, opting to wear a black suit set with a peplum jacket.

2005: Memoirs of a Geisha Premiere 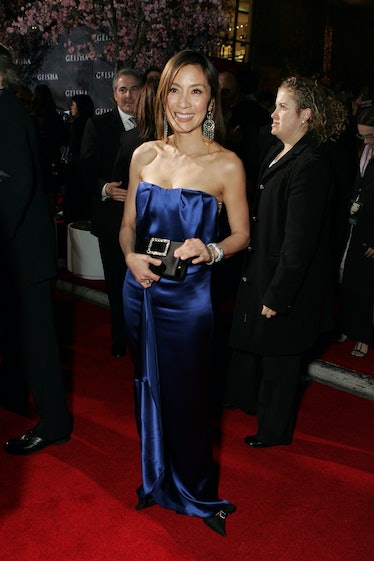 For the premiere of the 2005 film, Memoirs of a Geisha, Yeoh wore a strapless, royal blue gown. 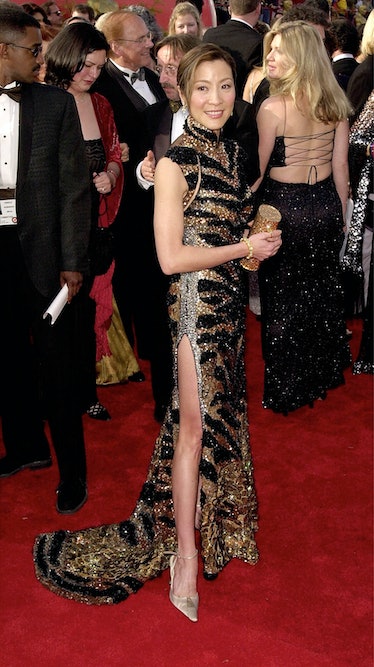 This black and gold, zebra print dress was quite the showstopper at the 2001 Oscars. 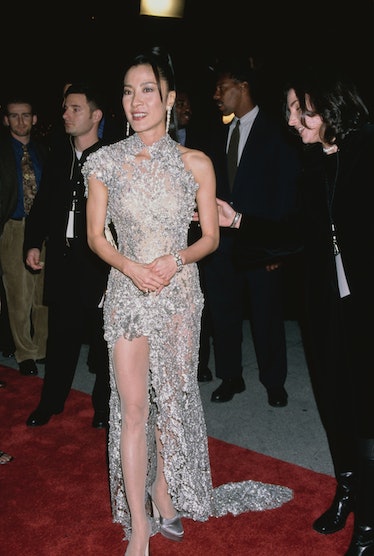 Apparently, Yeoh always had a thing for sparkle. Take this silver, embellished dress she wore to the Tomorrow Never Dies premiere in 1997. 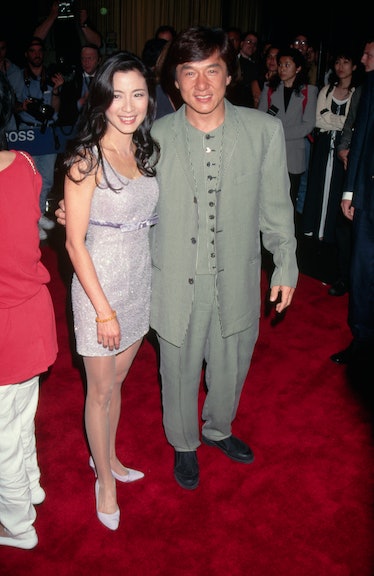 Yeoh, who at the time was going by Michelle Khan, posed with her Supercop costar, Jackie Chan, in a sparkly purple mini dress at the movie’s premiere.

The Risk of Heart Disease After COVID

24 Best Undershirts for Men in 2022: The Perfect Layers to Keep You Dry and Comfortable All Year Long

Who is Bobby Wooten III

Sonos accidentally shipped customers extra speakers and charged them for it

How Good Is This Ecommerce Platform?