This week, we tested out new flagship smartphones, high-powered laptops and much-improved earbuds. Devindra Hardawar reviewed the latest 14- and 16-inch MacBook Pros and reports back that they provide almost everything one could want out of a powerful laptop. Billy Steele spent time listening to the third-generation AirPods and concluded they sound much better than the previous version. And Cherlynn Low used Google’s Pixel 6 and 6 Pro and found that the camera-heavy handsets have a lot more to offer, including a great starting price.

Devindra Hardawar says the 14- and 16-inch MacBook Pros are precisely what media professionals have been waiting for: speedy M1 Pro and Max processors, a comfortable keyboard, serious battery life and great speakers. They also feature most of the crucial ports MacBooks have been missing for years, including (finally!) an SD card reader, though the laptops are thicker and heavier as a result. And of course, all that comes with a high starting price of $1,999.

Devindra was particularly impressed by the Liquid Retina XDR displays, which come close to 4K resolutions, and have mini-LED backlighting to produce up to 1,600 nits of brightness. He was also pleased to find support for 120Hz refresh rates, and by the benchmark testing in which both MacBook Pros blew away competing Windows PCs. However, while the laptops were able to speedily convert a 4K video clip to 1080p, Devindra doesn’t think they’d make the best gaming machines — trying to load Borderlands 3 produced an unplayable mess. Overall though, he says these computers have practically everything one, especially a creative professional, would want in a powerful notebook — as long as you can stomach the price tag. 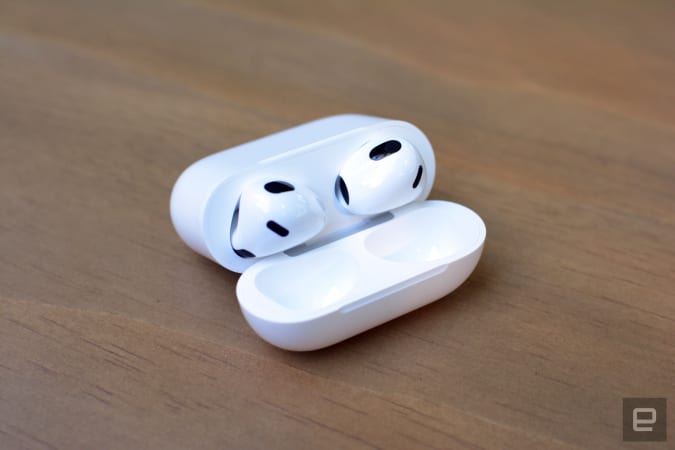 Apple’s latest AirPods have been almost completely redesigned from the previous version; the buds themselves have a new look, courtesy of the contoured shape which reduces weight and features a tapered silhouette and an angle to increase comfort. Billy Steele says the company’s efforts to build better AirPods have paid off: the new buds are more comfortable and and have much better audio quality, with bigger and more immersive sound that remained open and airy. That’s thanks to a custom driver paired with a high-dynamic-range amplifier, as well as the new H1 chip and the inward facing mic. Billy says these changes made the AirPods something he actively wanted to listen to music with.

The new AirPods also have an IPX4 rating so they’ll survive sweaty workouts or small splashes. They can also detect skin which, combined with the built-in accelerometer, makes for more accurate pausing and extends battery life. The new chip means you can listen to tracks in Dolby Atmos on Apple Music, and the spatial audio is available with dynamic head tracking to change the position of the audio when you turn your head. However, the latest AirPods still lack active noise cancellation and Transparency mode as these features are still reserved for the pricier AirPods Pro. While Billy acknowledges that these earbuds aren’t for everyone, he says they continue to offer Apple users features that are well integrated with iPhone, iPad and Mac. 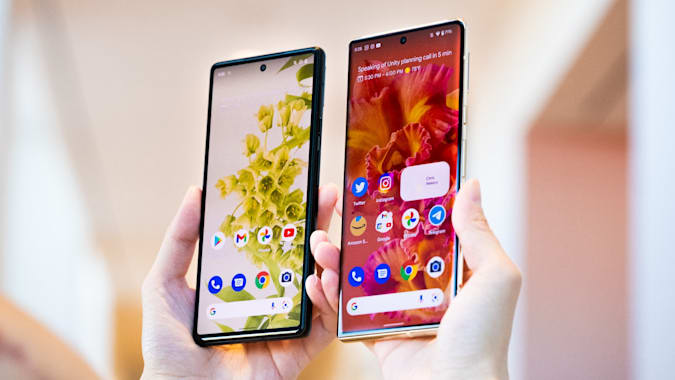 Cherlynn Low says the newest Google phones — the Pixel 6 and 6 Pro — are the most intriguing phones that the company has made in years. Featuring the first Google mobile processor, Tensor, the two handsets also have improved camera hardware, lovely OLED screens, speedy refresh rates (120Hz for the 6 Pro, 90Hz for the 6), and decent speakers. Cherlynn says the best feature is the surprisingly low starting price — only $599 — which makes some of the drawbacks more forgivable.

One of the issues she had with the phones was the laggy under-screen fingerprint sensor, which requires the display to be on before it unlocked — a process that she says doesn’t need to have two steps. She was more impressed by the new voice keyboard, which did an excellent job of transcribing speech, and the additional camera features. The sensors are sharper and bigger with larger pixels, producing bright, clean photos — and special camera features, like Magic Eraser and Face Unblur, give users a lot of control over their photos. The Pixel 6 and 6 Pro excelled in our battery tests, too, lasting 20.5 hours and 17 hours, respectively. Overall, Cherlynn calls the handsets a superb return to form, showing off Google’s strengths in the software and photography departments.

This body positive artist wants every woman to be celebrated, regardless of size.

Roma 1-2 AC Milan: Zlatan Ibrahimovic scores his 400th league goal to set the visitors on their way to victory

How a Roe Overturn Would Deepen America’s Divides