A teabag contains traces of DNA from insects and other animals that interacted with the plants before they were harvested and packaged.
Tolga Akmen / AFP via Getty Images

A Famous Golden Palace in Spain Is Turning Purple, And Now We Know Why : ScienceAlert

If the leaves from a tea bag could tell their stories, they would paint a picture of a thousand fleeting interactions. Bees landed on them while pollinating flowers. Caterpillars chewed on them and built cocoons near them. Spiders tethered webs to them.

But many of the relationships between plants and animals go undocumented. Cataloging every animal that feeds on or pollinates a given plant can take a massive amount of time and effort. “There’s very, very specific interactions, and very cryptic interactions of which we know very little because no one has basically put in the effort of studying this before,” says Henrik Krehenwinkel, an ecological geneticist at Trier University.

But Krehenwinkel led a team of scientists that discovered a new way to uncover some of these interactions between plants and animals. They bought teas and herbs from a grocery store and tested the dried and packaged leaves for minute remnants of DNA, a method called environmental DNA or eDNA analysis. In their recent study, published in Biology Letters, the team found traces of more than 1200 different arthropod species from their analysis of just four plants: chamomile, mint, tea and parsley. This method can be applied to any dried plants, making it a potentially invaluable tool for monitoring endangered insect species and tracking the spread of crop pests.

The researchers chose teas and herbs for their eDNA study because the commercial products made from them included leaves that had been crushed up and dried. “In a sample like coffee, which is very heavily processed, you probably have very little DNA left,” says Krehenwinkel, “so we tried things which were kind of as natural as possible.”

The scientists scoured the shelves at local grocery stores for herbs and teas originating from across four continents. They bought multiple versions of the same product but from different brands to make sure each tea had a range of origins represented, which would maximize the number of arthropods they could find. “I basically just went to a couple of different grocery stores and bought a whole bunch of different types of tea they had,” says Krehenwinkel. “They must have thought I’m a pretty heavy tea drinker.”

The team had to develop methods to extract and amplify the arthropod DNA from among all the plant material. The vast majority of the DNA in tea leaves is from the tea plant itself. “Probably 99.999, or something like this, percent of the DNA we extract is plant DNA, and only a tiny fraction, which is left, is the insect DNA,” Krehenwinkel explains, “which, of course, is good for the tea drinkers because they want to drink the tea and not the insects.”

He adds that even a minute presence of arthropod DNA is a good sign that the tea isn’t dripping with pesticides. 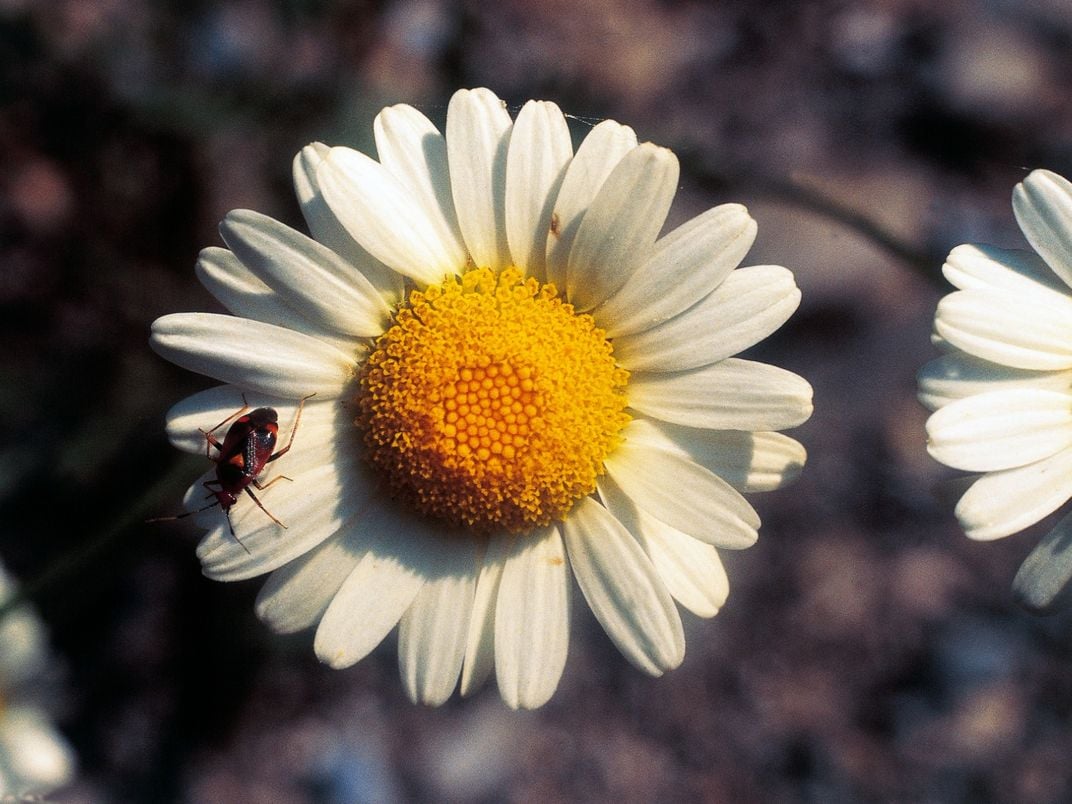 An insect walks across a chamomile flower in Aragon, Spain. Researchers looked for eDNA from insects in chamomile tea.

The researchers figured out how to isolate arthropod DNA by finding a key sequence that differs between arthropods and plants. The team discovered, on average, more than two hundred different types of arthropods from each tea sample. Not all of these animals could be matched to known species, highlighting a need for further research on the more obscure and understudied groups. But those that were identified generally matched the known distributions of both plants and arthropods. For example, mint tea contained DNA from insects found in the peppermint-growing Pacific Northwest region of the United States, whereas green tea contained DNA from insects native to East Asia.

Being able to analyze eDNA from commercial teas could make it easier to collect data on insects from around the world. According to Eva Egelyng Sigsgaard, a molecular ecologist at Aarhus University who was not involved in this study, a common problem in many eDNA studies is the limited volume of samples that can be obtained by a small team of researchers. Using commercially-produced teas and herbs circumvents this issue by taking advantage of the existing infrastructure for harvesting, drying and transporting plant material. “You could even say that the sampling has been done to some degree, unwittingly, by these companies that have produced those products,” says Sigsgaard.

Analyzing the arthropod DNA from tea leaves or other dried plant material could help scientists track the spread of insects that are considered pests. Insects are often inadvertently transported around the globe, catching a ride in cargo ships, potted plants or firewood. While most won’t survive the trip, some species relocate successfully and go on to wreak havoc on forests or crops. Being able to detect harmful species soon after they show up in a new area could help kickstart the management process before pest populations skyrocket.

Other dried plants could also be analyzed using the same eDNA methods from this study. Krehenwinkel is especially interested in extracting arthropod eDNA from dried plants that were collected decades ago and carefully stored in museum collections. Those eDNA results can then be compared to that of modern plants from the same locations to see which arthropod species have come and gone.

As Krehenwinkel envisions it, these comparisons of old and new plant samples will provide a way to “travel back in time and understand how communities have changed.” This historical lens could be helpful for insect conservation efforts, especially in light of recently documented insect declines. While scientists know that many insects are in danger due to threats like climate change and habitat degradation, they have a difficult time quantifying the extent of these losses.

Julie Lockwood, an ecologist at Rutgers University who was not involved in this study, points out that comparisons of eDNA from old and new plant matter could also help scientists uncover when an insect species was first introduced, whether purposefully or not, into a new area. “The question often is, when did this species actually first show up?” she explains, “We don’t know. We get first records: the first time someone saw them. But that can be decades after when they first arrived.”

Krehenwinkel’s team also wants to use their methods to get children interested in ecology and conservation by providing a hands-on way to contribute to ongoing research. While the actual molecular analysis requires expensive high-tech equipment, collecting and drying plants is easy to do at home. Krehenwinkel explains that with only an envelope, a Ziploc bag and some silica packets—like the ones that come in pill bottles to absorb moisture—kids can quickly collect and dry plants for use in future eDNA research.

“Just give a little kit to collect plants to a child and then they can collect flowers, and basically, we can process those flowers and reconstruct those interactions,” says Krehenwinkel. He adds that he hopes, “with these community science projects, we’ll be able to get large-scale information on plant-insect interactions.”

A Famous Golden Palace in Spain Is Turning Purple, And Now We Know Why : ScienceAlert

When the Heat is On, Red-Eyed Treefrogs Hatch Early | Science

Congress Will Scrap Anti-Conversion Law If Voted To Power In Karnataka: Siddaramaiah

Tesla’s value tops $1 trillion after Hertz ordered 100,000 of its vehicles