Hologram-in-a-Box Can Teleport You Anywhere

The iconic Princess Leia hologram scene in the original Star Wars movie in 1978 did much to whet our technology appetite for this futuristic form of communication. In 2012 in the real world, the ground-breaking telepresence resurrection of Tupac Shakur at the Coachella music festival wowed the audience and made headlines. Such events, however, can take months of planning and hundreds of thousands of dollars to put on.

Now, sans the glasses, two venture-backed companies are impressing viewers with ostensibly similar technologies. ARHT Media, based in Toronto, Canada, and PORTL Inc., a start-up in Los Angeles, have begun shipping portable plug-and-play, cabinet-based holoportal systems the size of a telephone booth. In both cases, a person in a studio—the presenter—can appear in full-size, lifelike 3D form and interact with people anywhere in the world where one or more booths are hooked up to the companies’ networks via the internet.

I got to see a live demonstration of the PORTL technology this month, when a tech investor in PORTL, Marina Haba in Los Angeles, was beamed into a PORTL booth set up in a Tokyo apartment to speak with her son there. She and others who took part in the presentation appeared extraordinarily real. It was as if Haba was standing in the booth as the two conversed. However, the sound was low for us onlookers and latency occasionally interrupted the otherwise smooth communication. Nevertheless, overall, the presentation was striking and effective.

David Nussbaum, founder and CEO of PORTL, said that latency was currently sub-1 second, and the goal was to bring it down to under 100 milliseconds.

The PORTL Epic cabinet weighs in at around 180 kg and measures 2.1 meters tall, 1.5 m wide, and 0.6 m deep. A standard electric outlet and internet connection are all that are required for plug-and-play, and to sign on to PORTL’s cloud-based network that uses Amazon Web Services.

A two-way audio speaker-mic system is embedded into the booth’s bezels on either side, while two cameras are embedded at the top: an Intel RealSense camera captures the person directly in front of the cabinet for the presenter in the studio to see, and a Logitech Brio 4K camera gives an in-depth view of the surroundings.

On the presenter’s side, a simple studio is required (available as a kit from PORTL) equipped with a tripod-mounted softbox to provide LED illumination, a return-feed monitor displaying the person interacting with the presenter, a 4K camera on a tripod, and either a boom or lavalier mic. The feed to get online can be Wi-Fi, 5G or Ethernet. A stage for beaming the presenter is also needed, comprising cyclorama seamless white paper to create a white backdrop, and an acrylic board laid over the paper for the presenter to stand on and move about.

Nussbaum says the PORTL can be used to present events like virtual fashion shows, art and museum exhibitions, and to advertise products. Instructors can teach their skills as if live before students, while engineers could demo prototypes by beaming themselves to colleagues with access to networked cabinets. 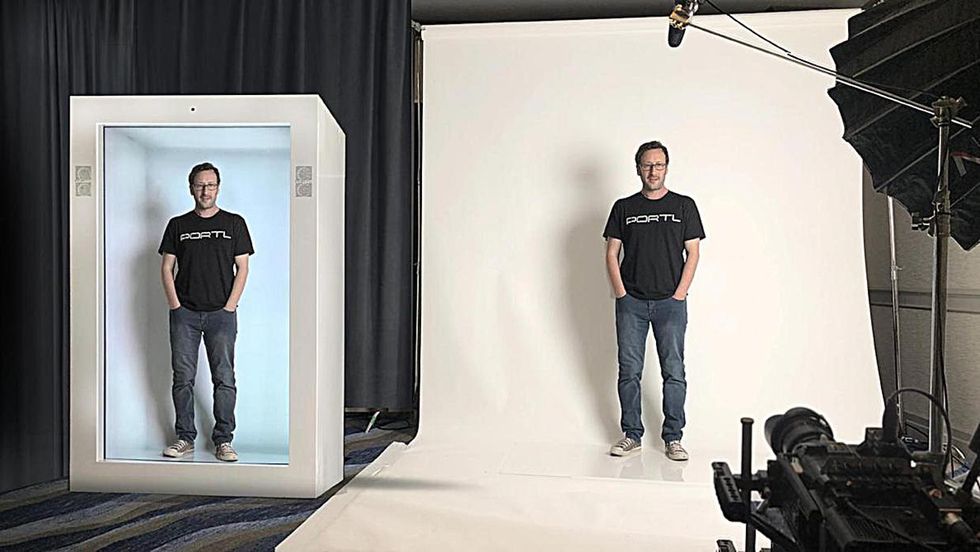 So how does this volumetric display work? The company holds its cards close to the vest but here’s what we know. First, the PORTL cabinet, which is brightly and evenly lit with embedded LEDS above, below and from the sides, is designed to capture and display shadows (from the walls) and reflections (from the floor). In addition, the company employs a custom-sized open-cell touch LCD panel made to PORTL’s specifications. The panel is positioned some 12 cm in from the bezel to creat a window effect, while the booth itself has a 43 cm interior depth. It is this combination of shadow, reflection and carefully positioned panel that gives the displayed content the appearance of volumetric depth.

This happens because our two eyes see slightly different images, known as binocular disparity, which the brain uses to reconstruct 2D scenes into scenes with 3D depth. Similarly, PORTL uses shadow, reflection and depth behind the LCD panel to create a volumetric effect.

AHRT’s HoloPod cabinet is also outfitted with cameras and two-way communications. As for the technology, a video feed is projected onto a mesh of woven material painted with proprietary reflective paint, and the image is reflected back to the audience. By carefully adjusting the lighting on both sides of the speaker, the viewer’s eyes combine the information and the brain creates the volumetric effect.

ARHT has established presenter studios in China, London, Toronto, New York and Los Angeles, as well as hook-ups with partners in other countries. It also offers an additional larger HoloPresence display that is better suited to major events than the boxed-in effect a cabinet delivers.

But Nussbaum believes the relative simplicity of PORTL technology makes it easier to shrink. “We hope to have a mini version ready for enterprises by the end of the year, or definitely by Q1 next year. And in Q2 or Q3, we will unveil a consumer device for the tabletop.”

The price tag is a hurdle preventing rapid take up. PORTL’s pricing starts from $60,000, though renting is also available “at much lower costs.” ARHT is only listing subscription prices, which begin at $15,000 and climb to $40,000 a year, depending on the number of transmissions. More enticing could be the upcoming mini PORTLs. “We hope to get their price down to under $2,000,” says Nussbaum.

The best mobile microphones you can buy, plus how to pick one