A new generation of Pokémon is on the horizon and with it comes speculation and anticipation that runs as rampant as a horde of Tauros. During this time, a new generation’s Starter Pokémon take the centre stage, particularly their final forms. With Pokémon Scarlet and Violet, releasing on 18th November, fans are already anticipating what the three starters — Sprigatito, Fuecoco, and Quaxly — will look like once they reach the end of their evolutionary lines.

For Pokémon Sword and Shield, Game Freak tried to keep the evolutions of Grookey, Scorbunny, and Sobble a secret up until release, but they were leaked about two weeks before the game launched. While we wait for the inevitable leak to happen – of which questionable rumours are already swirling around the internet – we decided to take a stab at what Generation IX’s Starters will look like with the help of a professional artist.

Enter the talented Richard Bell to help us bring our imaginings to life. We examined past trends of Starter Pokémon, took into account those nebulous – yet still very much unconfirmed – rumours, and looked outside the Poké Ball for inspiration. We then typed up a description and sent it over to Bell for him to illustrate. [Authors note: for the Braviary-eyed among you, yes – Richard is my brother].

Enjoy the results below, and let us know which one you think is on the money in the poll at the bottom of the page.

As always, Grass goes first. We’d like to apologise to everyone that disliked how Litten evolved into the bipedal Incineroar. We believe that Sprigatito will also evolve to stand on two feet. But where Incineroar becomes a muscular wrestler, our Sprigatito evolves into a much more lithe Pokémon, not unlike Gardevoir or Leavanny.

Not only that, it’s our prediction that the diminutive grassy cat will adopt a secondary typing of Dark, also like its fiery cousin. In fact, those questionable rumours that we’re intentionally not linking to have suggested this is the case as well.

Let’s have a look: 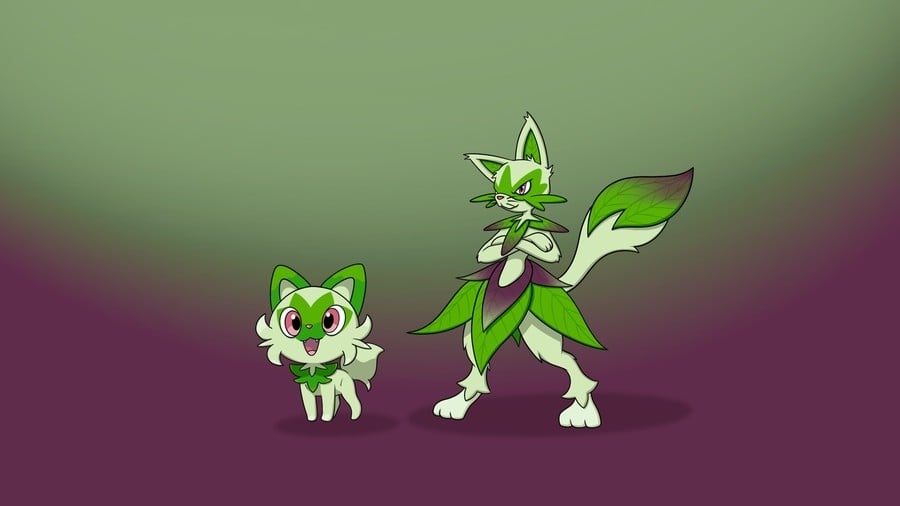 Bell incorporated a mask that we’re particularly fond of, bringing to mind a fellow hybrid Dark-type in Krookodile with its bandit-like appearance. One focal point of Sprigatito’s design we zeroed in on was its cheerful and playful nature – what would that look like when it evolved? Our result sees that playfulness replaced with a slightly cocky and mischievous demeanour that suits a Grass/Dark-type well – not unlike Shiftry.

Its large, leaf-shaped tail makes for a perfect Grass and Dark-type weapon, allowing it to make use of moves like Leaf Blade and Brutal Swing.

Our vision of Fuecoco differs from the other crocodilian starter, Totodile. Where Totodile retains a somewhat lean upper body as it evolves into Croconaw and then Feraligar, we wanted Fuecoco to maintain a bulkier shape given its rotund appearance. 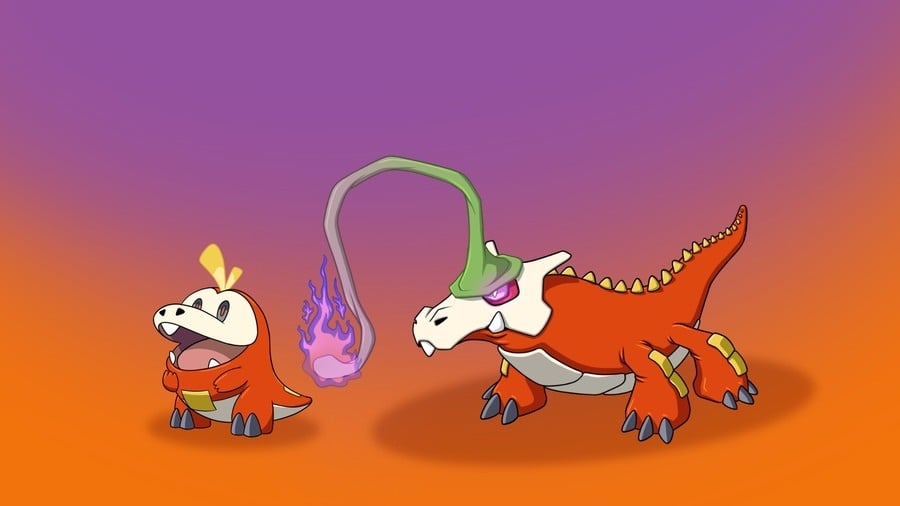 We focused on Fuecoco’s passing resemblance to a chili pepper, making our design resemble a large, crocodilian ghost pepper. Yes, we chose a ghost pepper – one of the spiciest – because this Fuecoco evolution becomes a Fire/Ghost type. We were quite pleased with that.

Bell incorporated into the design an anglerfish-like antenna to draw in unsuspecting Lechonk for an easy snack. Perhaps this Pokémon will also get a very spicy signature move.

We’ll be the first to admit that we went a little wild with Quaxly’s design, but with its pompadour hairstyle how could we not? What sprang to mind when we first considered designing Quaxly’s evolution wasn’t another Pokémon, but rather – stay with us here – two men that rocked a similar hairstyle: Cartoon Network’s Johnny Bravo and King of Rock and Roll himself, Elvis Presley.

Yes. You read that correctly. Observe: 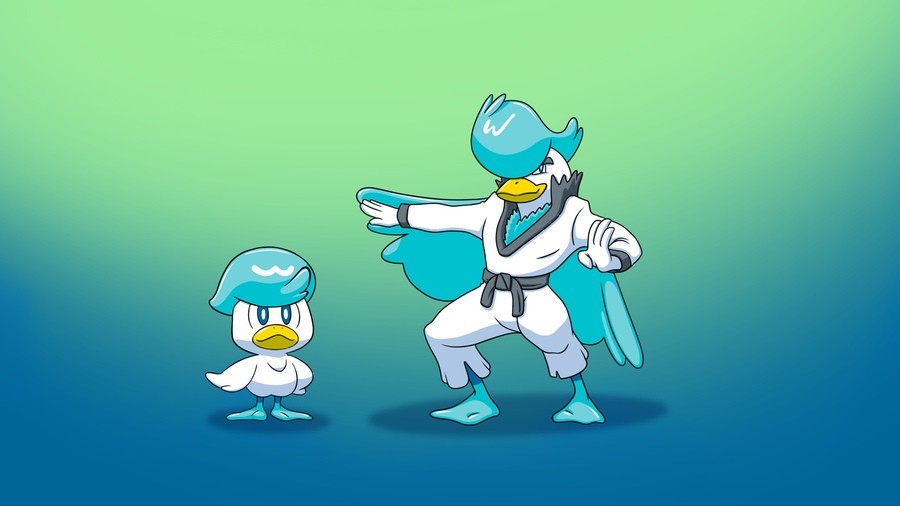 The fact that we already know Quaxly doesn’t like to get its hair messy and it covers itself in a dirt-repelling gel tells us that this Pokémon’s evolution will likely become even more fastidious and self-absorbed about its appearance, thus its hairstyle blossoms into a majestic sight to behold. And to match with Sprigatito and Fuecoco’s secondary typings, we think Quaxly may adopt the Fighting secondary type. Great hair and muscles go hand in hand, after all.

In a stroke of artistic genius, Bell took our Fighting suggestion Quaxly and added a popped collar to a karate-gi outfit. Not only that, he ran with the idea that Quaxly took after Elvis, and gave him a feathered cape reminiscent of the King’s very own from his Vegas period, wrapping up the diminutive duck’s final evolution as both an arrogant and stylish powerhouse of a Pokemon that makes use of moves such as Swagger and Attract as much as it does Close Combat.

[To Game Freak: if you’re reading this and want to steal our design for Quaxly’s evolution, the Bell Brothers give you our blessing, as we’re certain whatever you actually created will pale in comparison to Johnny Quaxly’s magnificence.]

And there you have it – our predictions of what the Scarlet and Violet Starters may evolve into, brought to life by a professional illustrator. You can trust that these are somewhat accurate because the last time we made Pokémon predictions we got 1 out of 9 correct. And the time before that we managed 1 out of 10. That’s pretty good, right?

Which of our three evolved gen 9 starter Pokémon do you think has most potential? (876 votes)

We’re excited to see how close we are when the real designs inevitably leak between now and 18th November. Which design of ours do you like best – if any? What would you change? Be sure to let us know in the poll above and the comments below!

KFC has new deal: free food, ‘no questions asked’, if you complain. Here’s how it works.

Joe Alwyn on Celine, His Return to Cannes, and Love For Sally Rooney