It’s possible Madonna just isn’t capable of giving anything less than her all. The queen’s fandom is such that if she were to give a 7 minute concert consisting solely of harmonica solos, there’d still be a line down several city blocks. But if she’s going to perform for her fans, during New York City Pride none the less, she’s going to give it her all.

What Designers Can Learn From Issey Miyake

Her show at Terminal 5 on Thursday June 23rd, presented in support of both her new remix collection Finally Enough Love and the World of Women NFT collection’s WoW Foundation, proved as much. Taking the form of a variety show, the event had more stunts, guests, and surprises than even Bill Hader’s Stefon character from Saturday Night Live could imagine. Bob the Drag Queen acted as MC, while his fellow Drag Race champion Violet Chachki did an elaborate burlesque act in a chair suspended from the ceiling, then ballroom legend and Madonna’s former Blonde Ambition-era backup dancer Jose Xtravaganza performed a routine to “Vogue” alongside Laganja Estranja. Madonna herself made out with Dominican rapper Tokischa during a rendition of “Hung Up,” and danced alongside son (and emerging style star in his own right) David Banda. In perhaps the biggest surprise of the night, Madonna brought out Saucy Santana to duet on a remixed version of his “Material Girl,” proving there’s room for more than one hit of the same name. Then the night ended with everyone involved on stage two-stepping to “Celebration.”

“It’s a tough job, but somebody has to do it,” Madonna told the crowd at one point (shortly before remarking that in New York City, “if you can make it here, then you must be queer”).

Of course, Madonna’s job involves outfitting herself, and she gave W an exclusive look into her fittings for the show. The mood board for the looks mixed Pride with her own legacy while incorporating some of her favorite established labels (Gucci and, of course, Versace) with some up-and-coming designers.

The focal point of her first outfit for the night, worn during “Hung Up,” was a custom sleeveless bomber jacket adorned with chains from up-an-coming label SEKS (the label is also a favorite of Julia Fox, who was in the audience where guests were sipping Madonna-themed Belvedere cocktails). 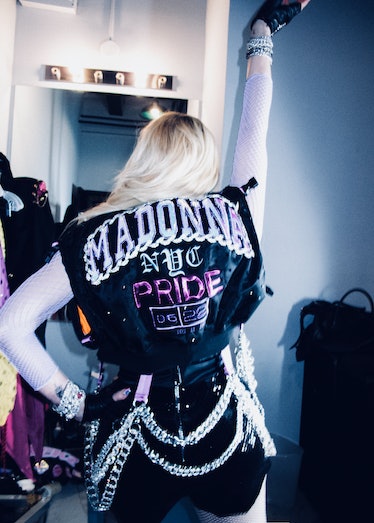 “It was important for Madonna and myself to include emerging New York designers into her show costumes,” stylist Eyob Yohannes told W. “SEKS provided a modern, cool, athletic aesthetic with a unique point of view that M and I very much loved.”

The look was finished with a vintage bustier from Illisas, shorts by Zhivago, and Givenchy boots. 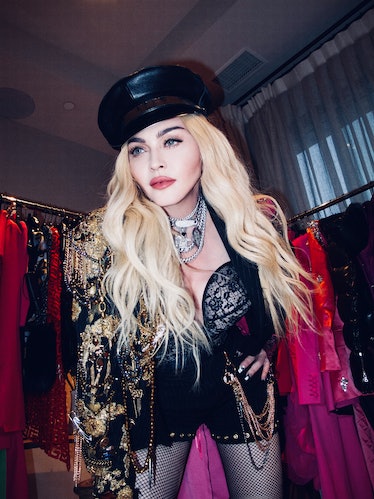 The inspiration for the look worn during the Saucy Santana duet was Madonna’s own “Material Girl” video, though it was Santana who channeled the Marilyn Monroe-inspired pink dress.

“M thought it would be great for Saucy to reference her pink dress look while she played the masculine counterpart in the video,” said Yohannes.

Madonna herself, instead, channeled one of the tuxedoed dancers with a Pride twist and an assist from Donatella Versace. 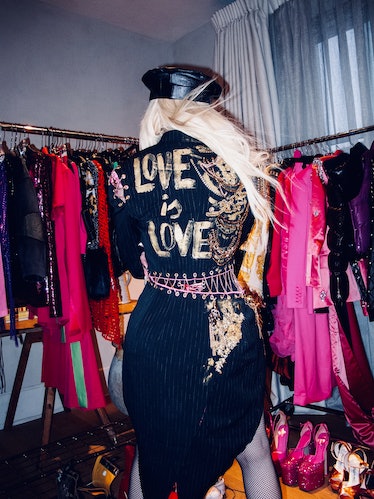 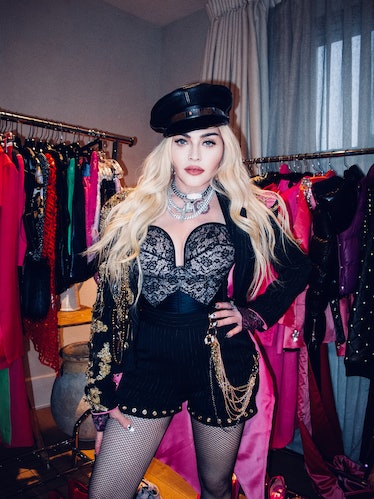 “When M and I were discussing costumes it was a no brainer to reach out to Versace to make a custom look for this event,” said Yohannes. “M has had a longstanding relationship with Donatella, whom she had just seen at a wedding. The Versace atelier created a custom suit dress from the runway show with custom hand painted Versace pins in pride colors.” 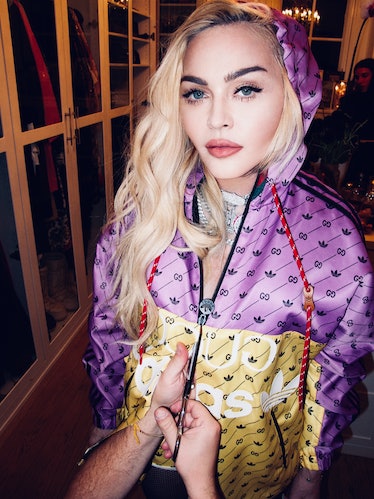 The final look of the night borrowed from Gucci’s recent collaboration with Adidas. She wore a matching jacket and short over a bustier from Anoeses, a Ukrainian label specializing in high-fashion fetishwear. The pointed cups subtlety references a certain famous cone bra. 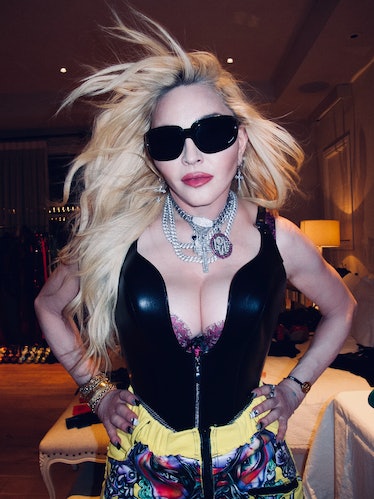 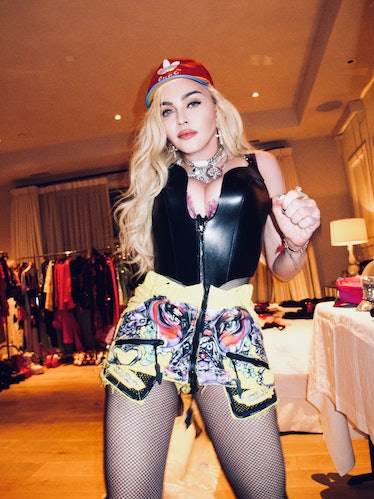 “It has been extremely exciting to delve into M’s archives and find ways to reference past looks with a modern and fresh perspective,” said Yohannes. “Juxtaposing new fashion with nods to M’s historic moments has been quite the journey.”

Why Pain May Not Be Over For Bitcoin Holders Just Yet

What Designers Can Learn From Issey Miyake

24 Best Undershirts for Men in 2022: The Perfect Layers to Keep You Dry and Comfortable All Year Long

How To Confront a Loved One About Drug Addiction?

Why Should You Plan Your Upcoming Trip to Vienna – LFT