Rivian, the electric vehicle maker that has attracted major backing from Amazon, is trying to attract more engineers in the Seattle region based on job openings posted on the company’s website.

The company, with more than 1,500 total openings, currently employs about 9,000 people companywide and has a growing team of more than 120 in the Seattle region. That includes service and support personnel at a Bellevue, Wash., service center near the intersection of Northeast Eighth Street and 116th Avenue Northeast.

Despite the surge in workers in the region, Rivian declined to speak to any plans to open a dedicated office for engineering personnel in Seattle or Bellevue. A spokesperson previously told the Puget Sound Business Journal that employees would remain mostly remote as the company figured out its “workplace strategy.”

GeekWire spotted an elusive Rivian-made Amazon delivery van at the Bellevue location this week. The tech giant has been waiting on delivery of some 10,000 custom vans that it said last October it hoped to have on the road as early as 2022. That number is part of 100,000 that Amazon ordered for its fleet and envisions using by 2030.

The YouTuber HyperChange posted video (below) of an electric Amazon van out and about in Seattle earlier this year.

Amazon has backed Rivian through its Climate Pledge Fund, which is aimed at investing in companies that accelerate Amazon’s pledge to be net zero carbon across its businesses by 2040. Amazon was among lead investors in a $2.5 billion financing round in Rivian in July and previously backed Rivian in 2019 in rounds of $700 million and $1.3 billion.

Founded in 2009, Rivian has raised about $10.5 billion to date. It announced plans this summer to go public at a reported valuation of $80 billion.

In a form filed with the SEC last week, Rivian described the Amazon Electric Delivery Van (“EDV”) order as “the largest order of EVs ever.”

“Developed to be safe, comfortable, and easy to operate for drivers, these vans will offer a step change in driver experience relative to vehicles available in the market today,” Rivian said. “They are also designed to achieve lower total cost of ownership for Amazon while supporting a path to carbon neutral deliveries. We expect to gain rich experiences from what we believe will become the largest centrally managed EV fleet in the world.” 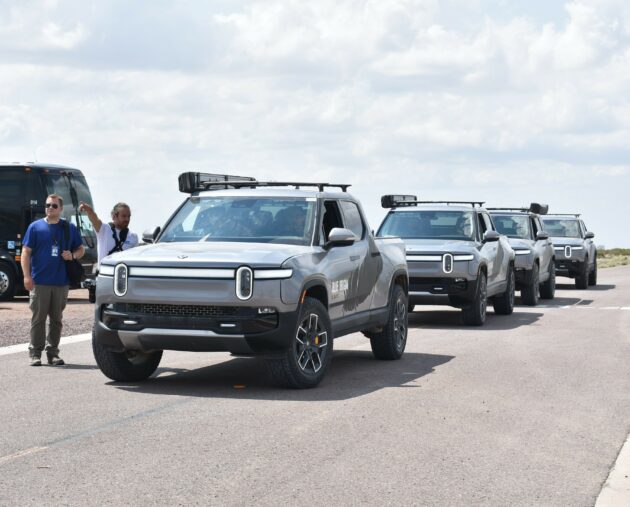 In the same form, Rivian revealed how things are progressing with the production and delivery of its first-generation consumer vehicle, the R1T all-electric pickup truck, noting that 56 of the vehicles had been produced and 42 delivered as of Oct. 22. Launch and delivery of the R1S sport utility vehicle will begin in December, the company said.

Amazon founder Jeff Bezos and his Blue Origin space venture have at least gotten their hands on the trucks, using Rivian vehicles to carry crew members to the launch pad and pick them up during suborbital space missions flown out of Texas.

Along with the Bellevue service center, Rivian had also previously been linked to a possible showroom in Seattle’s Belltown neighborhood. But the company declined to address where those plans stood, instead offering that it had just opened its first “Hub,” a gathering space for fans of the trucks in Venice, Calif.

UN envoy blames to Syria for failure of constitution talks