Devin Haney is trained by his father Bill (right)

When Devin Haney fights Australia’s George Kambosos for the undisputed lightweight world title in Melbourne on Saturday, he will be attempting to deliver the crowning achievement of what could prove the sport’s most successful father-son team.

The unbeaten American, however, was originally forced to travel to the other side of the world for his most significant fight without his father, trainer and “best friend” Bill, who was initially refused a visa because of a conviction dating back to 1992 – before Devin had even been born.

Bill Haney was 22 – one year younger than Devin is now – and living in Oakland, California when he was imprisoned for 40 months for possession and conspiracy to distribute two kilograms of cocaine.

His son’s birth in 1998 contributed to him transforming his life. Today he is Devin’s manager and trainer and, after unexpectedly and dramatically being given permission to travel the day before the fight, he will be present at the Marvel Stadium when Devin challenges to add Kambosos Jnr’s WBA, IBF and WBO titles to the one he already holds from the WBC.

“That’s one of the main reasons I want to do this – I want to prove my dad right to the world, to show the world that everything my dad said was true,” Devin Haney told BBC Sport.

“At one point they thought he was crazy. He’s been saying I’m the best fighter in the world for a long time now. When I come out victorious, everything he said will be true.

“We’re very close. That’s my best friend. That’s my man. Without him none of this would be possible. I can’t thank him enough.

“It’s been tough. We’ve had injuries, fights fall out, but we stuck to what we believed in and I’m getting my shot at everything.

“No relationship is going to be perfect, especially with someone like my dad, who’s going to tell you when you’re wrong.

“When you get a lot of fame and money, someone doesn’t want to hear that, so that’s when stuff gets a little rocky, but he’s been there every step of the way. I truly trust his opinion, and I value what he says.” 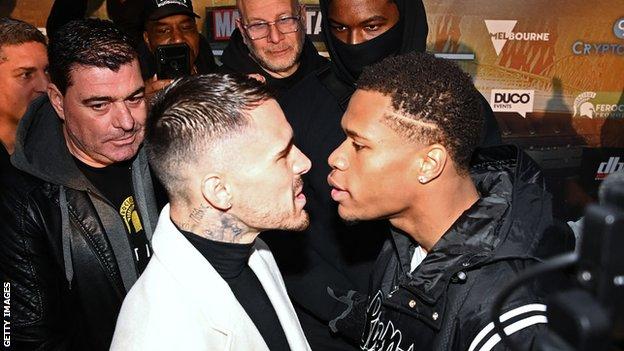 The Haneys had sought to recruit British coach Ben Davison as an assistant trainer, but Davison has been unable to travel to Australia.

In his absence Yoel Judah, the father of retired world champion and Devin’s godfather Zab, will also work Haney’s corner, having prepared to deputise for Bill.

“We’ve had the pleasure to train with some of the best,” Bill said.

“The very first time he was in the gym [aged eight] he put in a hell of a performance just off his own talent.

“The moment I take most pride in was when Floyd Mayweather was in the gym, and Floyd was preparing for Conor McGregor [in 2017]. It was a passing of the torch – for six rounds it was like Floyd was in the mirror.

“We bet on ourselves. We went down to Mexico [to turn professional in 2015]. Everyone said we were fighting cab drivers, but the whole experience of getting in and out of the ring in a foreign place built us up for this day here.

“While you’re going through the struggle, it can seem tough, but once you get to this position, it feels like that was the process.

“The lowest point was [Ukraine’s Vasyl] Lomachenko becoming [WBC] franchise champion. We got the belt to become interim champion, and were elevated to champion, but the world didn’t accept [Devin as world champion].”

It will not be lost on either of the Haneys that one of Devin’s favourite fighters Roy Jones Jnr – like Floyd Mayweather, once part of a successful father-son trainer-fighter team – was in 2009 stopped in the first round in Australia by Danny Green, when he was considerably past his peak.

Similarly Zab Judah, in 2001, was stopped in the second by Kostya Tszyu, the last Australian to be as proven at world level as the 28-year-old Kambosos. 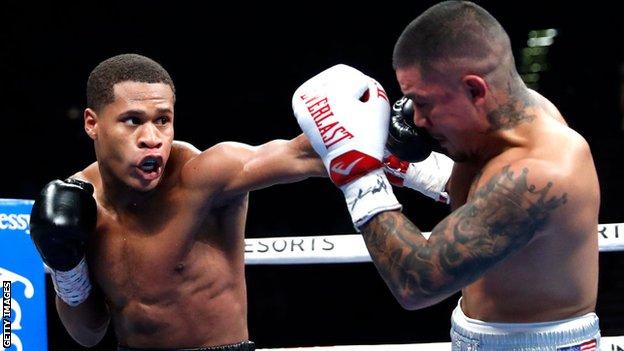 Kambosos himself won as the underdog when in November he beat Haney’s then-undefeated compatriot Teofimo Lopez in New York; he will also have home advantage, potentially crucial when his and Haney’s combined record stands at 47-0.

“I’m no longer doing parenting with Dev,” said Bill, who predicts that his other son, 12-year-old Shaun, will one day play tennis at the Australian Open.

“It’s friendship, patience and understanding with him. That’s what keeps us going.

“He’s the boss. It’s about being professional. Understanding him as a fighter and human being, and giving him it real – he can handle it.”

“This fight is all about legacy,” Devin added. “Very few fighters become undisputed [he would be the eighth of the four-belt era]; I’m looking to stamp my name in the history books forever.

“My main focus is going there to win for me, my family, and my loved ones.”

What’s next for Biden’s social spending bill: The Senate struggle

2 Ways to Upload Longer Than One Minute Video on Instagram, IGTV

How to Buy Tickets to the Acropolis in Athens, Greece