DENVER — Nazem Kadri had three assists in a 2:04 span in the second period, backup Pavel Francouz stopped 24 shots for his second career playoff shutout and the Colorado Avalanche beat the Edmonton Oilers 4-0 on Thursday night to take a 2-0 lead in the Western Conference finals.

The Avalanche broke through in the second after a scoreless opening period that featured something rarely seen so far in this series — defense. Artturi Lehkonen and Josh Manson scored 15 seconds apart to get things going in the second, with Mikko Rantanen adding another on Kadri’s third assist.

Game 3 is Saturday in Edmonton. The Avalanche are 5-0 on the road so far in these playoffs, and 15-4 in a best-of-seven series when taking a 2-0 lead.

This game was a departure from a high-scoring Game 1 in which there were 14 goals and 84 shots.

Nazem Kadri #91 of the Avalanche celebrates after assisting on a goal scored against the Oilers.Getty Images

Francouz grew stronger with every save he made as he stepped in for Darcy Kuemper, who left Game 1 with an upper-body injury. Francouz was serenaded with chants of “Frankie! Frankie!” from the crowd.

Colorado held Edmonton’s big three of Connor McDavid, Leon Draisaitl and Evander Kane to seven shots. Draisaitl saw his streak of nine straight games with at least one assist come to an end.

Mike Smith allowed four goals on 40 shots. This after the 40-year-old Smith was pulled in Game 1 after surrendering six goals. 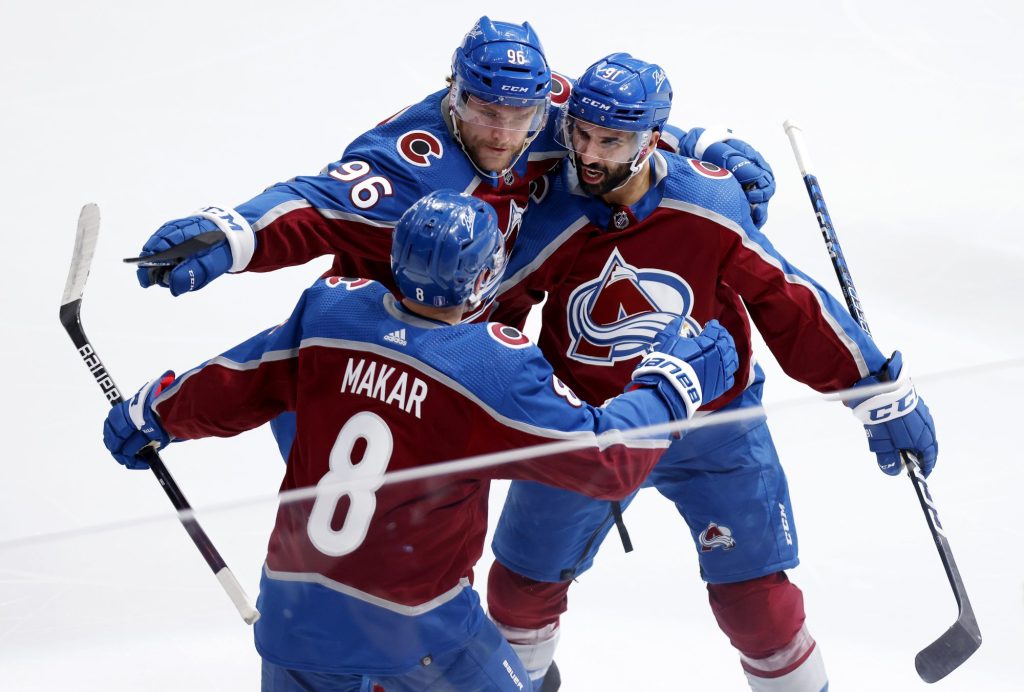 Mikko Rantanen #96 and Nazem Kadri #91 and Cale Makar #8 of the Avalanche celebrate a goal against the Oilers in Game 2.Getty Images

To slow down the speedy MacKinnon, Edmonton shadowed him virtually at all times. The relentless pressure included a trip by Duncan Keith after the whistle. It didn’t draw a penalty but drew plenty of boos from the crowd. MacKinnon also got smacked in the face on a play.

The heavy focus on MacKinnon opened the door for others like Kadri, who was originally credited with the first goal at 3:58 of the second before it was ruled that Lehkonen tipped the puck.

Kadri tied the franchise record for assists in a period. It was a mark set by Quebec’s Risto Siltanen in 1987 and matched in 1996 by Avalanche Hall of Fame forward turned GM Joe Sakic.

Colorado and Edmonton turned in about as entertaining first period as possible for no goals scored. It included Edmonton weathering Colorado’s 5-on-3 advantage.

There was also a play where Smith used his helmet to redirect a puck out of the air.

Francouz got into the nifty save act, too, including one when he ventured well out of his crease. He was able to stop Cody Ceci’s liner.