Michael Louis, the man who allegedly shot up Saint Francis Hospital on Wednesday, deliberately targeted surgeon Preston Phillips, whom he blamed for “ongoing pain” following a surgery the doctor had performed on his back, Tulsa authorities revealed during a press conference on Thursday.

The other three victims, Dr. Stephanie Husen, receptionist Amanda Green, and patient William Love, merely “stood in the way” as Louis attempted to kill the doctor who had operated on him the previous month, Tulsa Police Chief Wendell Franklin explained. 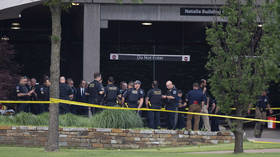 Investigators reportedly found a letter on Louis’ person in which he “blamed Dr. Phillips for the ongoing pain following the surgery” he had performed on the alleged shooter and “made it clear that he came in with the intent to kill Dr. Phillips and anyone who got in his way,” the police chief continued.

The Muskogee, Oklahoma resident allegedly bought the AR-type rifle recovered at the scene at a local gun store earlier on Wednesday, and also purchased a handgun at a pawn shop on May 29. He was released from the hospital on May 24, five days after Phillips operated on him, and “called several times over several days complaining of pain and want[ing] additional treatment,” according to Franklin.

Hospital CEO Cliff Robertson insisted the clinic had adequately responded to Louis’ medical concerns, adding that the suspect had visited the hospital for an appointment the day before the shooting. Expressing shock that anyone would want to kill Dr. Phillips, whom he called a “consummate gentleman,” he said no one was aware of the surgeon being concerned about his safety with regard to Louis or any other patient.

Louis was found dead of a gunshot wound on the second floor of the hospital’s Natalie Medical Building, near where the shooting took place, allegedly having killed himself after shooting his doctor and the three other victims.

READ MORE:
What we know about the Texas mass shooting

Police responded to the shooting within three minutes of receiving a 911 call, Tulsa deputy police chief Eric Dalgleish confirmed on Thursday. A bomb threat “linked to the shooting” was also called in to the Muskogee police department on Wednesday, leading authorities to evacuate a house and urge people nearby to stay inside until it had been cleared.

The Tulsa shooting was the second to hit Oklahoma in the space of a week. One person died and seven were injured during a Memorial Day celebration in the town of Taft, about 45 miles away from Tulsa, on Monday. Several other shootings have made the news recently in the US, including in Uvalde, Texas, where an 18-year-old former student killed 21 people – mostly children – at Robb Elementary School while police inexplicably waited outside for reinforcements for over an hour.