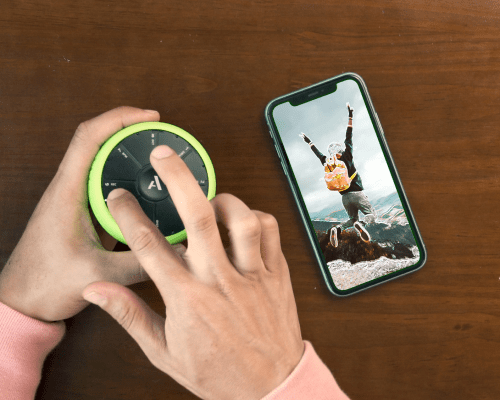 The idea of the Orbacam is to create quick and easy videos that Artiphon refers to as “Musical Selfies.” The results of the videos are fun, colorful, highly shareable music videos that sync automatically to whatever else you’re playing on the Orba. The app turns the already social media-magnet of a musical instrument into the perfect companion for Instagram Stories, TikTok or Snap creative pursuits.

“We believe that music is always a multisensory experience, and we designed Orbacam as an auditory, visual and tactile experience that anyone can play immediately,” says Artiphon’s CEO and founder Mike Butera. “We’ve seen the power of synchronizing music with social content, but almost all of that is just pasting someone else’s song on your video. Now people can create musical videos that are entirely their own.”

With Orbacam, the company made it easy to make music — what is new, is the ability to weave visual effects into the video export, without needing to do additional music mixing, audio routing or post-production.

The app also enables you to use the microphone connected to your phone — or the one built into your phone — to sing or beat-box your way on top of the music you’re creating. It also gives users the option to import videos and photos from the phone’s camera roll.

For armchair musicians, the Orba takes some of the scary parts out of creating music. Part synthesizer, part looper, part MIDI controller, the palm-sized digital grapefruit already made it easy and intuitive to create music. Most impressively, Orba wasn’t even the company’s first shot at creating weird and wonderful music-making tools. In 2015, the company pre-sold $1.3 million worth of the INSTRUMENT 1 musical instrument.

Ever the sucker for creative hardware products making their way to market, we’ve been keeping an eye on Artiphon. The Orba originally saw the light of day following a $1.4 million Kickstarter campaign, along with a cash injection from, among others, Warner Music. We thought it was fun to play with when it launched last year. We’re delighted to see the company add a companion app with more features, stretching its usefulness beyond the slightly gimmicky, if relatively affordable, offering.

If you already have an Orba, the free app is available from Artiphon today. If you don’t, you can pick up the Orba for $100 from a number of retailers, or direct from Artiphon.

Google will be launching their own foldable Pixel phone in Q4 of 2022- Technology News, Firstpost

Scarlet Witch Joins Fortnite: All Of The Marvel And DC Superheroes In The Game