When Coco Gauff, fresh from her French Open quarter-final victory, was asked about her new attitude to tennis, her answer enraptured the Philippe-Chatrier crowd.

“Enjoy life. No matter how good or bad my career is, I think I’m a great person,” she said.

“That’s a message for all the young players out there that your results, your job or how much money you make doesn’t define you as a person.

“As long as you love yourself, it doesn’t matter what anyone else thinks.”

It is this attitude that has taken Gauff, who memorably reached the fourth round at Wimbledon as a 15-year-old in 2019, to her first Grand Slam semi-final.

Now aged 18, the American will face Italy’s Martina Trevisan on Thursday for a spot in the Roland Garros final.

“Ever since I joined the tour, or even when I was young, [I was described as] the next Serena, next this, next that, and I think I really fell into the trap of believing that,” Gauff said.

“It’s important that you have high hopes for yourself, but at the same time it’s important to be in reality and I think that’s where I am.

Gauff first broke through at Wimbledon where, after coming through qualifying, she stunned Venus Williams in her first main draw appearance at a Slam.

She attracted the attention of former First Lady Michelle Obama during her run at SW19, which was ended by eventual champion Simona Halep. Halep predicted then that Gauff would “be in the top 10 soon” after her performances.

Emma Raducanu’s Wimbledon run two years later drew parallels to Gauff – but while Raducanu has had an up-and-down season since winning the US Open, Gauff has enjoyed a well-paced, gradual ascension through the rankings.

She won her maiden WTA title three months after Wimbledon and ended 2019 inside the top 100.

Gauff then ended Naomi Osaka’s title defence at the Australian Open in 2020 en route to the fourth round and broke into the top 20 a year later.

In between tennis tournaments, Gauff has graduated high school – something she described as tougher than her French Open run.

Asked about teenage successes in tennis, Gauff said: “I’m always rooting for the younger ones, because those are the people I played juniors with and I know them a little bit better.

“I’m sure that even me, Leylah [Fernandez], Carlos [Alcaraz], Emma [Raducanu] and all of us will be a great generation of tennis that’s kind of transitioning into now.”

Gauff, who still has a chance of winning the women’s doubles as well, reached the French Open quarter-finals last year and has gone a step further this year thanks to a dominant win over compatriot Sloane Stephens. 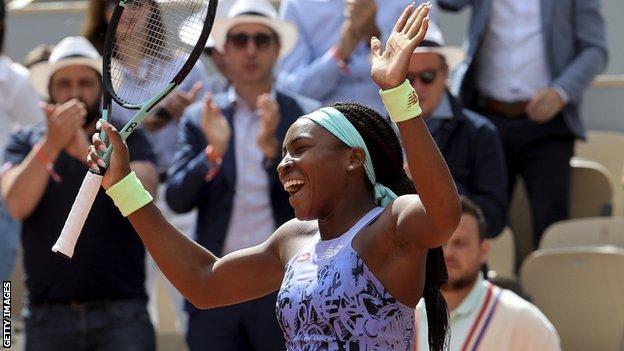 Her semi-final opponent, Italy’s Trevisan, is also competing in her first major semi-final, having reached the quarter-finals at Roland Garros in 2020.

Named after Martina Navratilova, Trevisan spent four years away from tennis to receive treatment for an eating disorder.

In a blog in 2020 she explained how she had to be “re-educated to eat” having “closed myself in my cocoon” when her father was diagnosed with a degenerative disease.

She won her first WTA title on the Morocco clay in the build-up to the French Open and beat 17th seed and US Open runner-up Fernandez to secure her place in the last four.

However, she faces a tough task against Gauff, who is the youngest Slam semi-finalist since the then-17-year-old Amanda Anisimova in 2019.

Gauff’s confidence and composure in Paris make her a formidable opponent – and give her a fine shot of following in the footsteps of world number one and tournament favourite Iga Swiatek by becoming a Roland Garros champion as a teenager.