Time might heal everything, but it does not change everything. Ten years later, Terry Collins still made the right decision to keep Johan Santana on the mound for what was more of an exorcism than a baseball game.

One hundred and thirty-four pitches. “Oh please,” Collins said when the man who sits in his old chair, Buck Showalter, turned the subject to the famous pitch count against the Cardinals. The former Mets manager still recoils from the memory, even if that night, June 1, 2012, stands tall beside 1986 and 1969 among the greatest memories in franchise history.

The man in the dugout had a choice — protect the $137.5 million ace and two-time Cy Young Award winner who had missed the previous season after major shoulder surgery, or pursue a no-hitter after the Mets had played 8,019 games without one.

“You’re my hero,” Collins told him.

Santana rewarded his faith with two outs in the ninth, recovering from a 3-0 count to strike out David Freese on his signature changeup and, ultimately, landing both men inside Citi Field on Tuesday night for an anniversary worth celebrating to the fullest, despite the questions it still inspires. 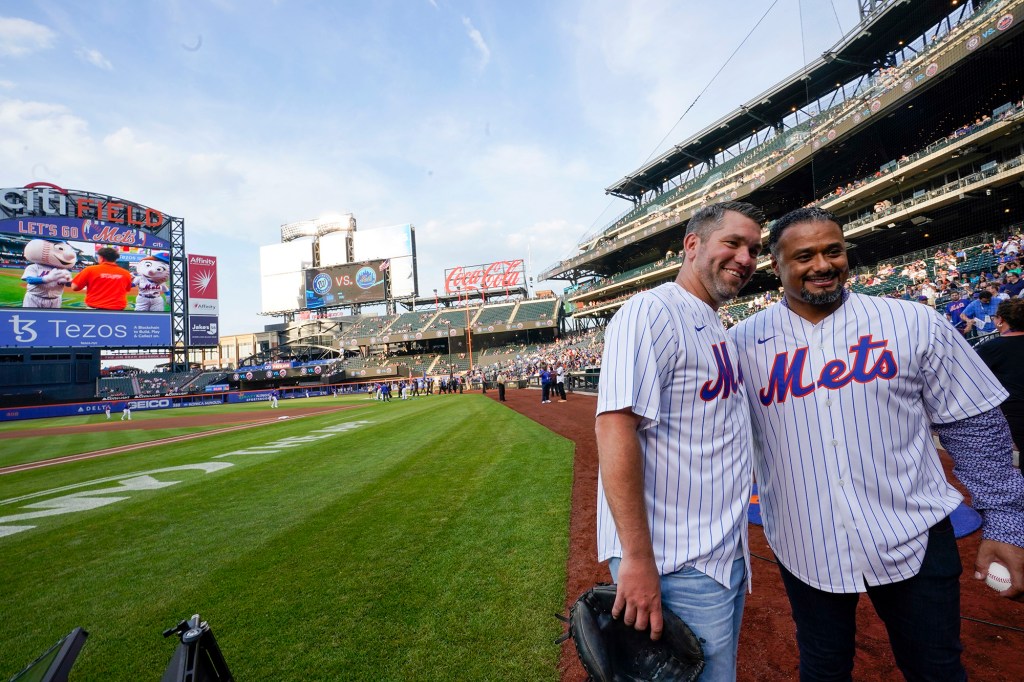 At 33, Santana threw 49 more innings that season, and then never pitched again. He would undergo a second major surgery on his left shoulder 29 months after the first. He would attempt a comeback with Showalter’s Orioles in 2014 that ended the moment he tore his Achilles tendon during extended spring training.

“Johan, you got an inning in you tonight?” Showalter asked him during Tuesday’s pregame news conference, with Santana standing in the back of the room.

Johan Santana’s son threw out the first pitch tonight, and then Johan posed for a picture with the 5 Mets that threw a combined no-hitter last month vs. Philadelphia pic.twitter.com/3ISY5cyaYy

“I wish,” the former Met said.

“Thanks for that offer, and that honor, but I might have one pitch.”

“I know you got one that will still work,” Showalter responded.

“I think I’ll use it tonight prior to the game,” Santana said.

He didn’t, as it turned out. Santana gave the ceremonial honor to his son, Johan Jr., then watched Showalter’s team continue its sheer dominance of the NL East with a 10-0 thrashing of the Nationals. It was fitting that Santana was back at Citi Field in the company of Showalter, the last manager to give him a chance.

It was also fitting that Santana was there to reassure Collins, the one Met who looked positively haunted over the final innings of that forever game.

“I think about it all the time,” the former manager said. “I’ve had some nightmares, but I’ve had some good dreams, too.”

Seated to his right, Santana wrapped his left arm around Collins and patted him on the back.

“Listen, let me tell you something … you’re going to have better sleep from now on,” Santana said. “It’s past and we’re here and nobody’s going to take that away from us.” 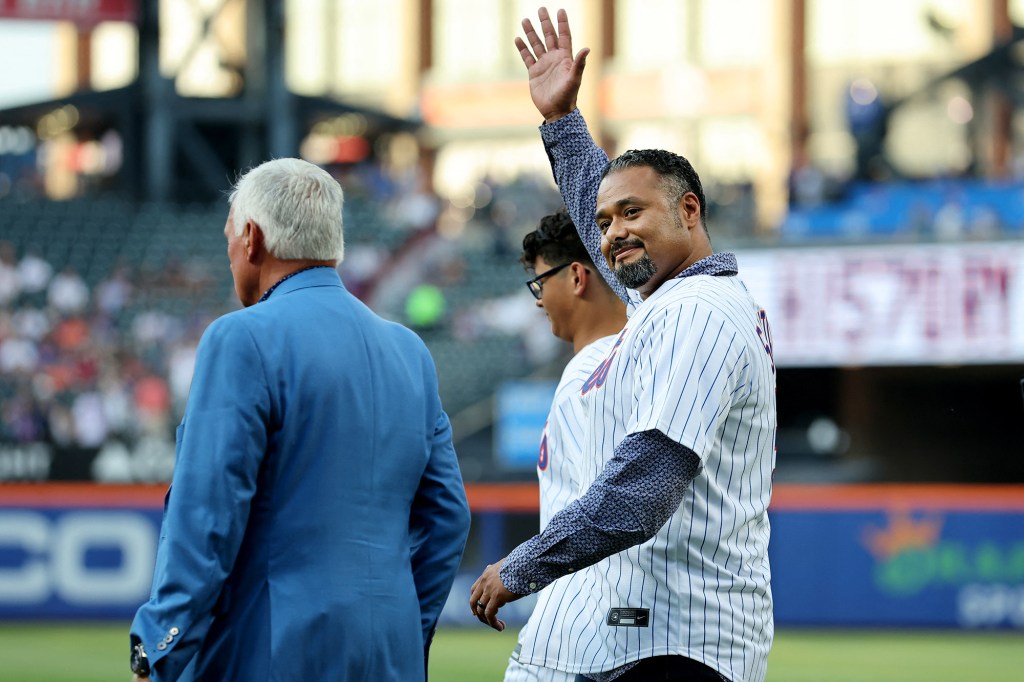 “That’s for sure,” Collins responded.

The manager was asked whether the benefit of hindsight would compel him to change the choice he made that night, when he surrendered to the moment and kept his man out there, the consequences be damned.

“I would make the same decision,” answered Collins, who had established a 115-pitch limit before the game. “Even that night … I felt that he deserved the opportunity to try to get it, because of who he is and what he stands for. I thought the people that were in the stands … they deserved to see that and have that opportunity.

“So it’s easy to say, ‘No, I wouldn’t do it again,’ and I know that probably hurt him a little bit afterwards, because of throwing that many pitches. But I have come to realize I probably would have done exactly the same thing.”

Collins did the right thing, and the only thing he could have done, even though he agonized over his choice and confessed the following day that it “went against about everything I stand for.”

The Wilpon Era Mets were long defined as a franchise that didn’t go for it, and as soon as pitching coach Dan Warthen informed a stunned Collins in the middle of the game that no Met had ever thrown a no-hitter, Collins knew he had to, well, go for it.

So did Santana, an old-school warrior who had claimed the last victory ever at Shea Stadium and had temporarily saved the 2008 Mets by delivering a 117-pitch, complete-game victory over the Marlins on three days’ rest after throwing a season-high 125 pitches — all on a torn meniscus in his knee. 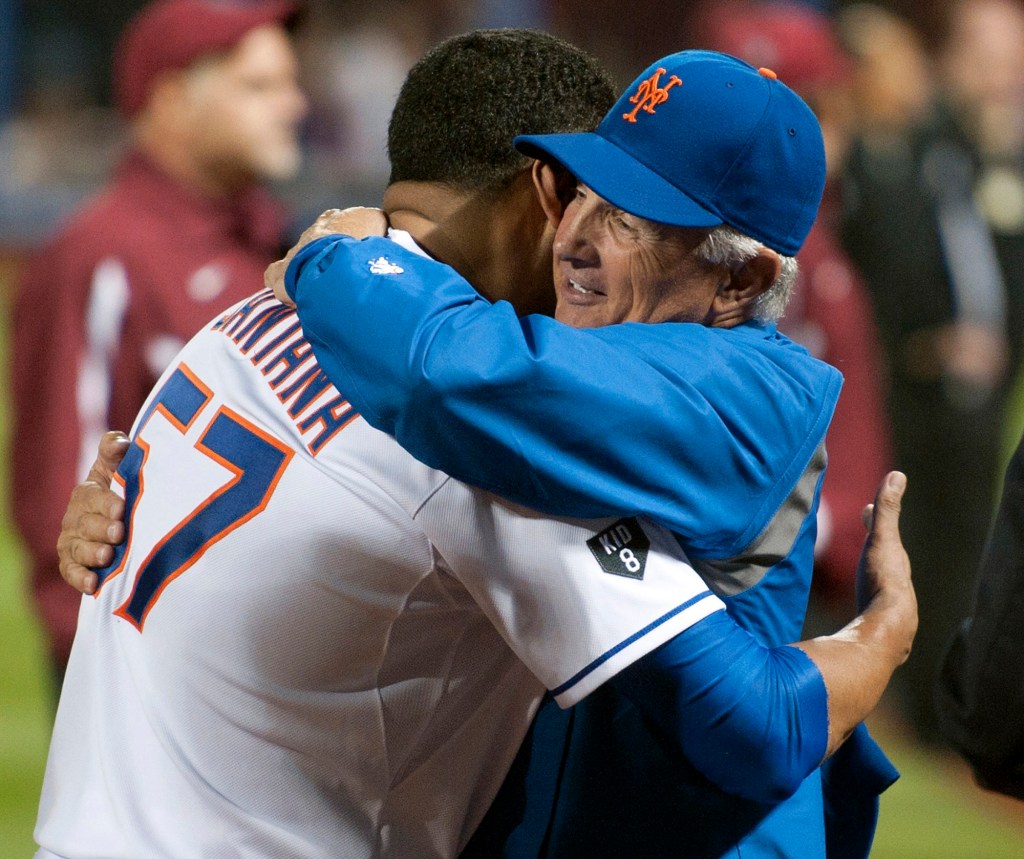 No, Collins wasn’t ever taking the ball out of his hand. “I knew I was going to have some arguments with him on the mound, in the dugout, in the parking lot,” Santana recalled. “I had an opportunity to do something very special, and I just wanted to finish it.”

When he finished it, when catcher Josh Thole rushed out to embrace him, the fans’ roar made the ace feel like he’d just won the World Series. Before returning to the Citi Field mound Tuesday night with his family, wearing his No. 57, Santana reminded everyone that his shoulder never felt right the entire 2012 season, and that he didn’t think Collins’ decision ended his career.

The pitcher said he had no regrets, and after some prodding the manager said the same. Terry Collins shouldn’t endure any more nightmares.

Lizard can switch from female to male before birth, but not vice versa

Nobody reads privacy policies. Nor should you have to.

A Weekend with Mae and Pop

Should Traditional Vaccines Be Used in the Global Fight Against Covid? | Science

Ray Liotta’s daughter Karsen posts tribute to her dad: You are the best