Scientists hope to mimic the most extreme hurricane conditions

Winds howl at over 300 kilometers per hour, battering at a two-story wooden house and ripping its roof from its walls. Then comes the water. A 6-meter-tall wave engulfs the structure, knocking the house off its foundation and washing it away.

That’s the terrifying vision of researchers planning a new state-of-the-art facility to re-create the havoc wreaked by the most powerful hurricanes on Earth. In January, the National Science Foundation awarded a $12.8 million grant to researchers to design a facility that can simulate wind speeds of at least 290 km/h — and can, at the same time, produce deadly, towering storm surges.

No facility exists that can produce such a one-two punch of extreme wind and water. But it’s an idea whose time has come — and not a moment too soon.

Hurricanes are being made worse by human-caused climate change: They’re getting bigger, wetter, stronger and slower (SN: 9/13/18; SN: 11/11/20). Scientists project that the 2022 Atlantic Ocean hurricane season, spanning June 1 to November 30, will be the seventh straight season with more storms than average. Recent seasons have been marked by an increase in rapidly intensifying hurricanes linked to warming ocean waters (SN: 12/21/20).

Those trends are expected to continue as the Earth heats up further, researchers say. And coastal communities around the world need to know how to prepare: how to build structures — buildings, bridges, roads, water and energy systems — that are resilient to such punishing winds and waves.

To help with those preparations, FIU researchers are leading a team of wind and structural engineers, coastal and ocean engineers, computational modelers and resilience experts from around the United States to work out how best to simulate these behemoths. Combining extreme wind and water surges into one facility is uncharted territory, says Ioannis Zisis, a wind engineer at FIU. “There is a need to push the envelope,” Zisis says. But as for how exactly to do it, “the answer is simple: We don’t know. That’s what we want to find out.”

It’s not that such extreme storms haven’t been seen on Earth. Just in the last few years, Hurricanes Dorian (2019) and Irma (2017) in the Atlantic Ocean and super Typhoon Haiyan (2013) in the Pacific Ocean have brought storms with wind speeds well over 290 km/h. Such ultraintense storms are sometimes referred to as “category 6” hurricanes, though that’s not an official designation.

The National Oceanic and Atmospheric Administration, or NOAA, rates hurricanes in the Atlantic and eastern Pacific oceans on a scale of 1 to 5, based on their wind speeds and how much damage those winds might do. Each category spans an increment of roughly 30 km/h.

Category 1 hurricanes, with wind speeds of 119 to 153 km/h, produce “some damage,” bringing down some power lines, toppling trees and perhaps knocking roof shingles or vinyl siding off a house. Category 5 storms, with winds starting at 252 km/h, cause “catastrophic damage,” bulldozing buildings and potentially leaving neighborhoods uninhabitable for weeks to months.

But 5 is as high as it gets on the official scale; after all, what could be more devastating than catastrophic damage? That means that even monster storms like 2019’s Hurricane Dorian, which flattened the Bahamas with wind speeds of up to nearly 300 km/h, are still considered category 5 (SN: 9/3/19).

“Strictly speaking, I understand that [NOAA doesn’t] see the need for a category 6,” Olson says. But there is a difference in public perception, he says. “I see it as a different type of storm, a storm that is simply scarier.”

And labels aside, the need to prepare for these stronger storms is clear, Olson says. “I don’t think anybody wants to be explaining 20 years from now why we didn’t do this,” he says. “We have challenged nature. Welcome to payback.”

FIU already hosts the Wall of Wind, a huge hurricane simulator housed in a large hangar anchored at one end by an arc of 12 massive yellow fans. Even at low wind speeds — say, around 50 km/h — the fans generate a loud, unsettling hum. At full blast, those fans can generate wind speeds of up to 252 km/h — equivalent to a low-grade category 5 hurricane.

Inside, researchers populate the hangar with structures mimicking skyscrapers, houses and trees, or shapes representing the bumps and dips of the ground surface. Engineers from around the world visit the facility to test out the wind resistance of their own creations, watching as the winds pummel at their structural designs. 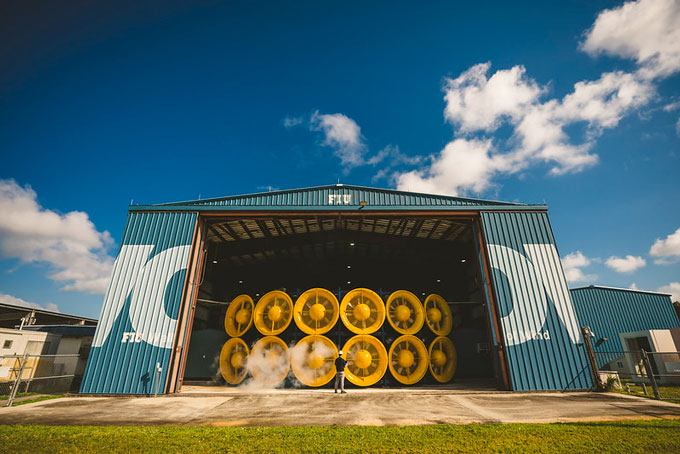 Twelve fans tower over one end of the Wall of Wind, a large experimental facility at Florida International University in Miami. There, winds as fast as 252 kilometers per hour let researchers re-create conditions experienced during a low-grade category 5 hurricane.NSF-NHERI Wall of Wind/FIU

It’s one of eight facilities in a national network of laboratories that study the potential impacts of wind, water and earthquake hazards, collectively called the U.S. Natural Hazards Engineering Research Infrastructure, or NHERI.

The Wall of Wind is designed for full-scale wind testing of entire structures. Another wind machine, hosted at the University of Florida in Gainesville, can zoom in on the turbulent behavior of winds right at the boundary between the atmosphere and ground. Then there are the giant tsunami- and storm surge–simulating water wave tanks at Oregon State University in Corvallis.

The new facility aims to build on the shoulders of these giants, as well as on other experimental labs around the country. The design phase is projected to take four years, as the team ponders how to ramp up wind speeds — possibly with more, or more powerful fans than the Wall of Wind’s — and how to combine those gale-force winds and massive water tanks in one experimental space.

Existing labs that study wind and waves together, albeit on a much smaller scale, can offer some insight into that aspect of the design, says Forrest Masters, a wind engineer at the University of Florida and the head of that institution’s NHERI facility.

This design phase will also include building a scaled-down version of the future lab as proof of concept. Building the full-scale facility will require a new round of funding and several more years.

Past approaches to studying the impacts of strong wind storms tend to use one of three approaches: making field observations of the aftermath of a given storm; building experimental facilities to re-create storms; and using computational simulations to visualize how those impacts might play out over large geographical regions. Each of these approaches has strengths and limitations, says Tracy Kijewski-Correa, a disaster risk engineer at the University of Notre Dame in Indiana.

“In this facility, we want to bring together all of these methodologies,” to get as close as possible to recreating what Mother Nature can do, Kijewski-Correa says.

It’s a challenging engineering problem, but an exciting one. “There’s a lot of enthusiasm for this in the broader scientific community,” Masters says. “If it gets built, nothing like it will exist.”

Pulse Detection in the Presence of Noise

3 Lessons to Steal from This Super Cute, Budget-Friendly Apartment Kitchen