BUDGET 2021: WHAT WE ALREADY KNOW RISHI WILL ‘REVEAL’ TODAY

The Government has already announced spending worth more than £30billion which Rishi Sunak will confirm at the Budget later today.

Below is a breakdown of some of the most notable funding pledges:

Commons Speaker Sir Lindsay Hoyle stepped up his war of words with the Government today as he tore into Rishi Sunak over a slew of pre-Budget policy announcements.

The Chancellor will deliver his eagerly awaited Budget tomorrow in front of MPs but the Treasury has set out numerous policies in the media ahead of the financial statement.

That approach has prompted repeated rebukes from Sir Lindsay, who is adamant all policy announcements should be made to politicians first.

Sir Lindsay, who has made a point of rebuking ministers for making announcements outside the Commons,  criticised ministers over the approach yesterday and did the same again this afternoon after more fiscal details were briefed.

The Commons Speaker accused Mr Sunak and the Treasury of treating Parliament in a ‘discourteous manner’ as he vowed to do everything in his power to ensure ministers answer MPs’ questions.

Meanwhile, MPs on both sides of the chamber expressed their anger at the Government’s communications strategy, accusing ministers of ‘treating parliamentary democracy with utter contempt’.

It is the latest stand-off between the Speaker and ministers. In June Boris Johnson agreed to make major Covid decisions to Parliament as well as to the nation on television after he was given a blunt telling off.

Sir Lindsay granted a second urgent question in two days to force Treasury ministers to appear in the Commons to answer questions on the forthcoming fiscal event.

He said the ministerial code states important announcements of Government policy should be made to Parliament first when it is in session.

Sir Lindsay told the Commons: ‘I was disappointed to see more stories in the media today with apparently very well-briefed information about what will be in tomorrow’s Budget.’

Chief Secretary to the Treasury Simon Clarke defended the Government as he argued part of the objective in ‘trailing specific aspects of the Budget in advance is to help communicate to the public what we’re doing with their hard-earned money’.

Responding to a pre-Budget urgent question from Labour, he said: ‘The ability of Parliament to scrutinise the Government, including the Budget, is clearly crucial which is why we’ve got five days of parliamentary debate ahead of us this week and next and why the the Chancellor will be appearing in addition in front of two select committees of this House next week.’

He said the ‘bulk of the detail of the Budget’ will be set out by Mr Sunak in the Commons tomorrow.

He added: ‘Part of the Government’s objective in trailing specific aspects of the Budget in advance is to help communicate to the public what we’re doing with their hard-earned money because we believe there is merit in clear and accurate information.’

Mr Clarke faced criticism from both Labour and Tory MPs.

Sir Lindsay Hoyle today stepped up his war of words with the Government as he blasted Rishi Sunak for making pre-Budget policy announcements. 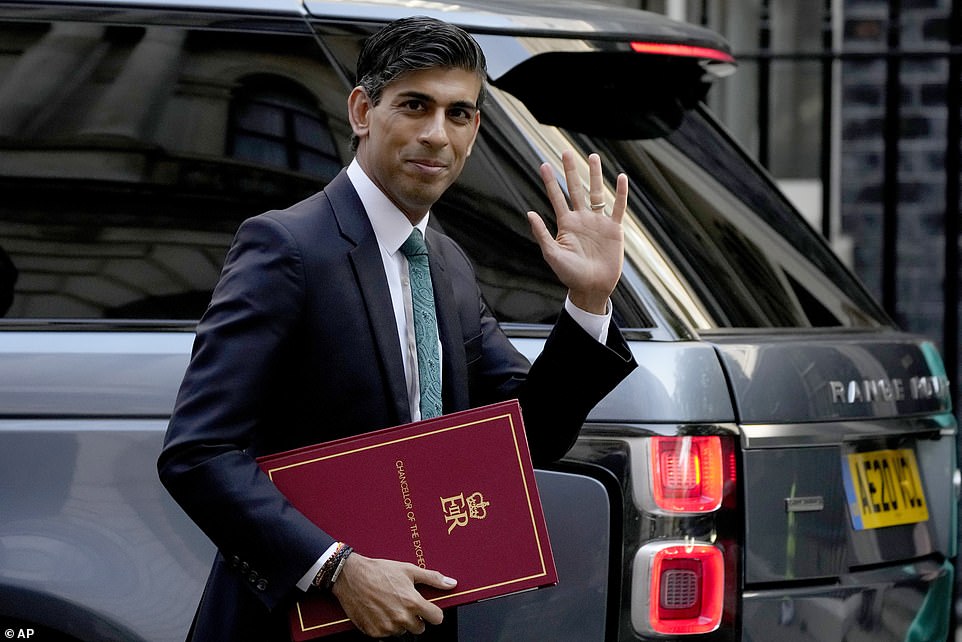 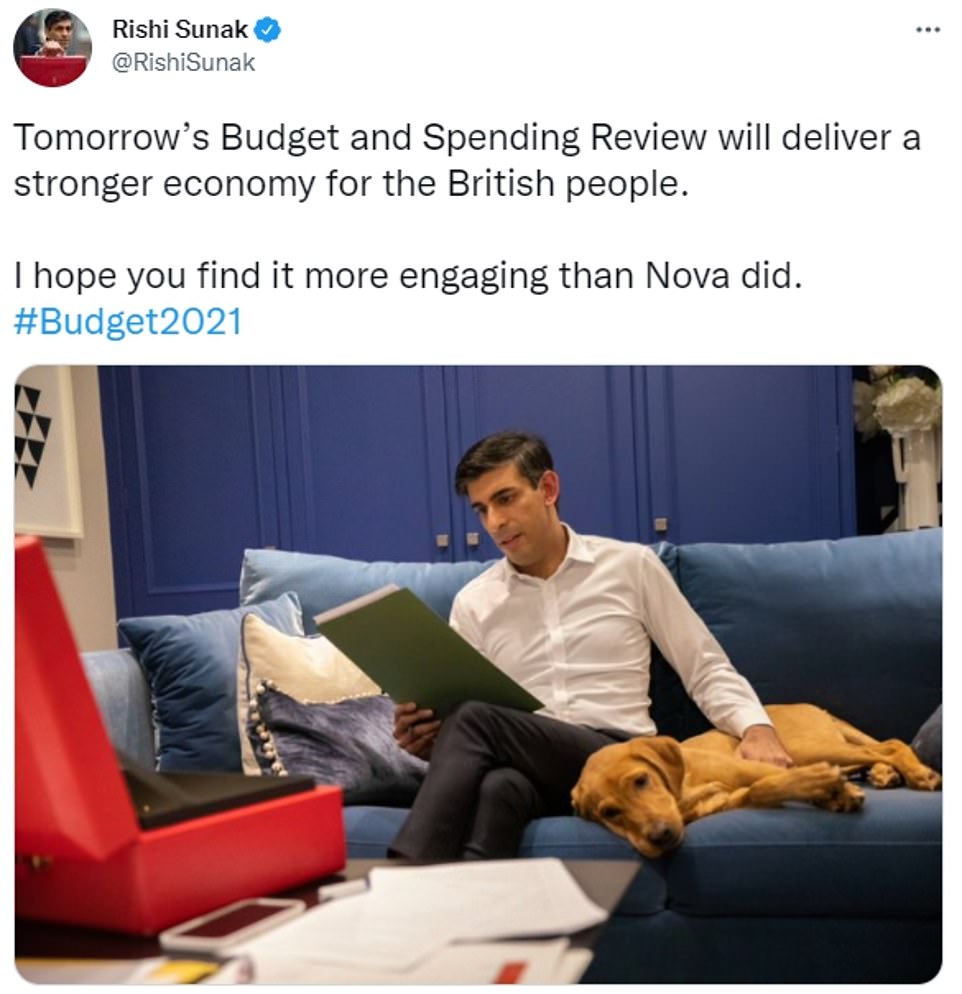 Conservative Julian Lewis asked the minister: ‘Why is it important, right or necessary to share Budget information with the media before it is shared with this House where it can be subjected to proper scrutiny? And will he give an undertaking on behalf of the Treasury team to stop doing it?’

Sir Lindsay has repeatedly tackled ministers on their habit of making political announcements at press conferences and in briefings to the press.

In January he hit out at Boris Johnson again for setting out his lockdown decision at a press conference instead of to MPs.

The Commons Speaker told the Commons the Prime Minister ‘should be here, I’m sorry if his dinner would have been affected’ after Mr Johnson announced an extension of coronavirus measures to the media.

He accused the PM of ‘running roughshod’ over Parliament, and said Number 10’s treatment of Parliament has been ‘totally unacceptable’ as he again stressed that announcements should first be made at the despatch box.

In June he summoned the PM for showdown talks amid a furious bust-up over the four-week lockdown delay.

Mr Johnson was slapped down by Sir Lindsay for ‘disrespecting’ MPs with a live television broadcast from Downing Street – because MPS should have been the first to be told.

Yesterday he referenced the 1947 resignation of Hugh Dalton, who quit as Labour chancellor after parts of his Budget were published in in a paper before he gave his speech, in an attack on Mr Sunak.

On his way into the chamber he told John Carvel, a reporter for the now defunct Star newspaper: ‘No more on tobacco; a penny on beer; something on dogs and pools but not on horses; increase in purchase tax, but only on articles now taxable; profits tax doubled.’

The reporter managed to turn around the information faster than the chancellor could announce it and the politician stepped down the following day.

It created a Whitehall precedent that leaking a Budget in advance was the most serious of leaks. But that rule has been eroded in recent years, with leaks of information starting under New Labour.

Sir Lindsay said: ‘At one time ministers did the right thing if they briefed before a Budget – they walked.’

Shouts of ‘resign’ could be heard, with the Speaker adding: ‘Yes, absolutely, resign. It seems to me we’ve got ourselves in a position that if you’ve not got it out five days before, it’s not worth putting out.

‘I’ve got to say, members are elected to this House to represent their constituents, those constituents quite rightly expect the MP to hear it first in order to be able to listen to what the Budget is about, but also for the days following that to be able to hold them to account. It’s not acceptable and the Government shouldn’t try to run roughshod over this House, it will not happen.’

Pre-Budget prep for the Millennial era! Rishi poses up a storm in socks and £90 plastic sliders as he loads up on Twix bars and cans of Sprite (but is there anything in the box we don’t know already?)

Rishi Sunak posed up a storm in socks with sliders today as he put the final touches to his Budget – fuelled by Twix bars and cans of Sprite.

The Treasury released a series of glossy photographs of the Chancellor preparing for his big day with aides, and his dog Nova.

He was pictured in one of his trademark grey sweatshirt, as well as American-style footwear that comes with a hefty £95 price tag.

Mr Sunak is vowing to create a ‘stronger economy for the British people’ after the pandemic caused chaos and sent the national debt spiralling to more than £2.2trillion.

But he is also under huge pressure to invest in infrastructure and services, as well as helping people through a burgeoning cost of living crisis.

Business chiefs today warned prices will rise after Mr Sunak teed up his financial package by declaring wages are to spike 6.6 per cent for the low-paid, and dropped the freeze for public sector workers.

Firms said they cannot keep soaking up costs after the Chancellor announced that the national living wage is going up from £8.91 to £9.50 an hour. One pub chain said 25p-30p will need to be added to the price of a pint of beer.

There has been speculation that he could slash the 5 per cent VAT rate on household energy bills to help millions of families struggling with the inflation squeeze.

However, Treasury sources have played down the prospect, saying he believes the move will subsidise richer households while doing too little for the poorest. 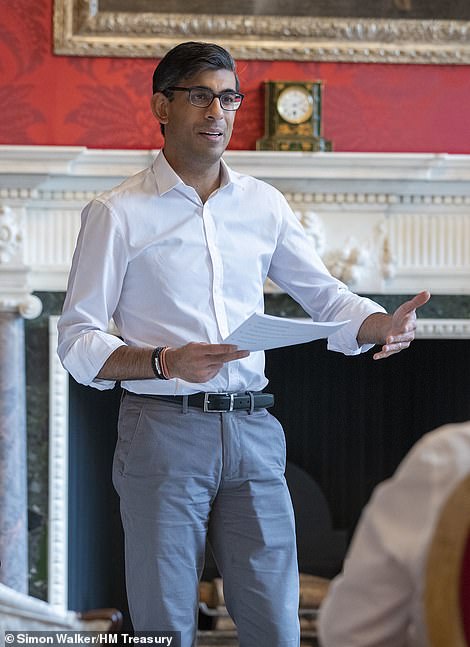 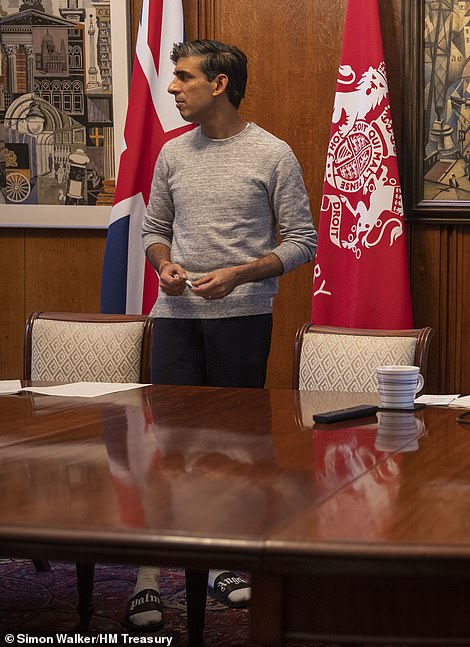 In pictures released by No111 today Rishi Sunak was pictured in one of his trademark grey sweatshirt, as well as American-style footwear that comes with a hefty £95 price tag 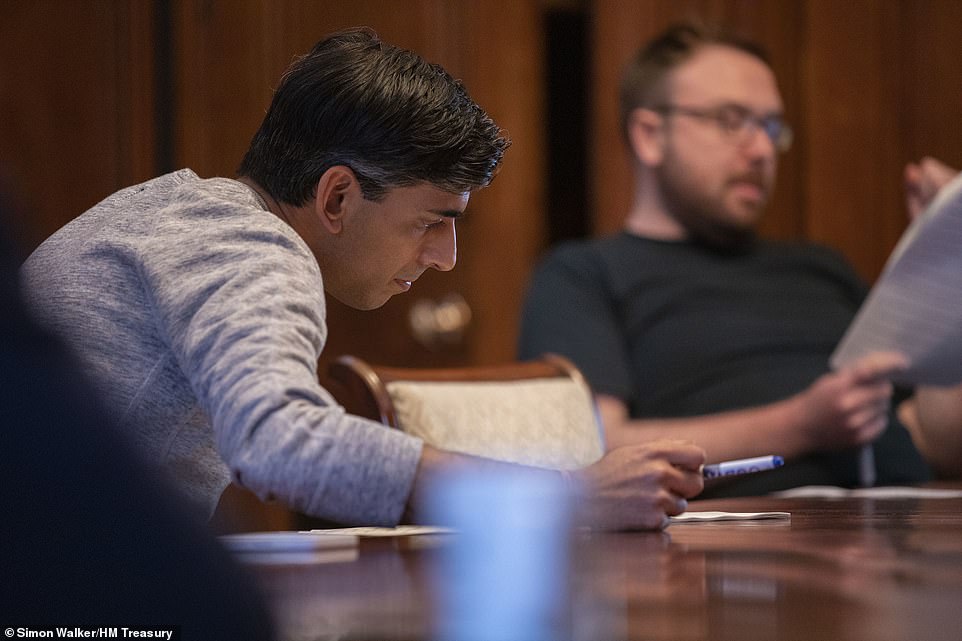 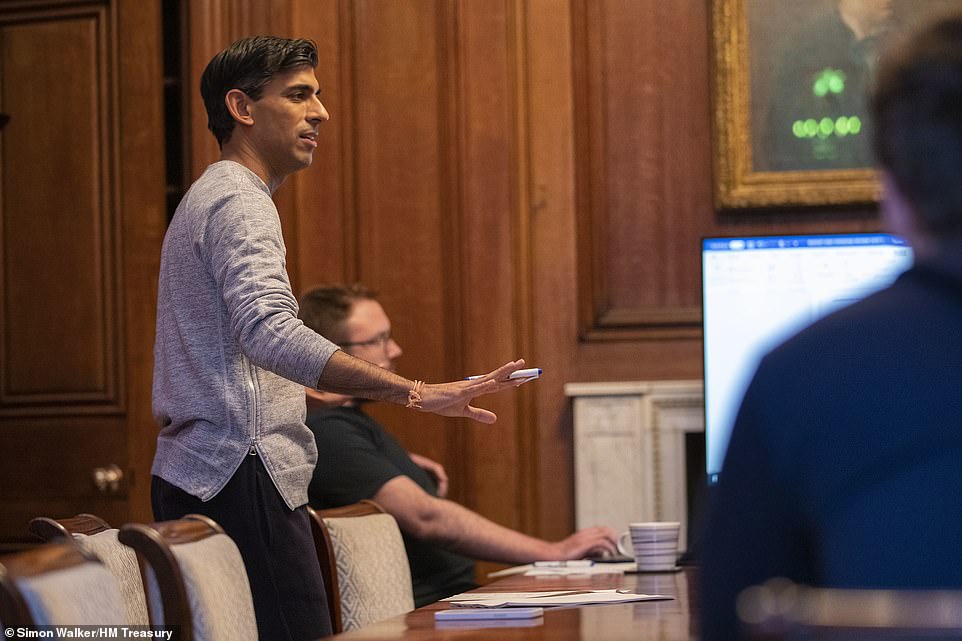 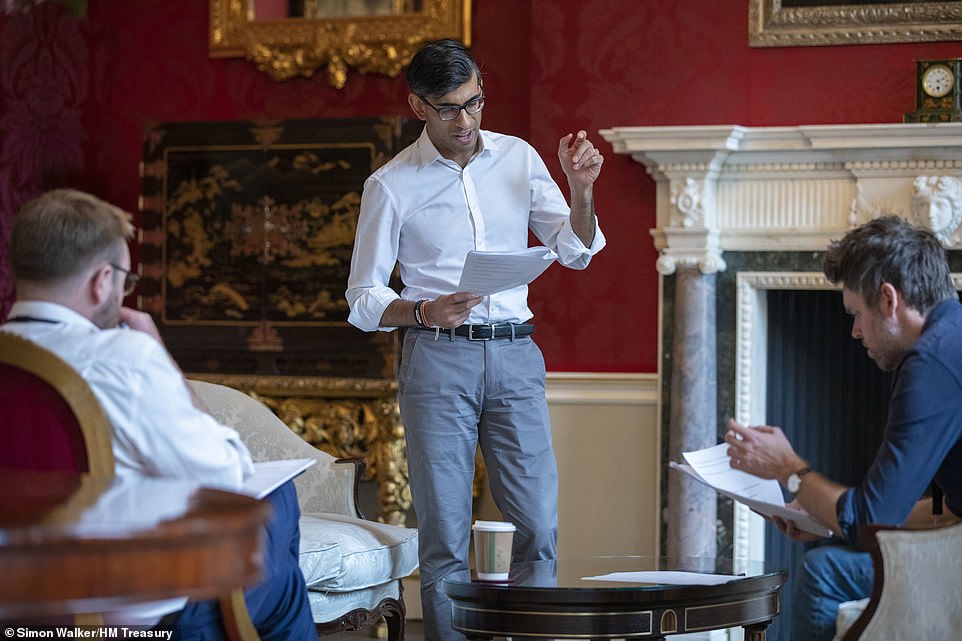 The combination of ending the pause on public sector pay and increasing the minimum wage would provide a salary boost to up to seven million workers. But higher wages will mean higher costs for employers which are likely to be reflected in price increases, fuelling a further surge in inflation.

Critics have warned it would be ‘unfair’ to ask the private sector to fund a salary hike for the public sector given the ‘extraordinary economic pain’ caused by the pandemic.

Clive Watson, executive chairman of the City Pub Group, told BBC Radio 4’s Today programme the hospitality industry was ‘coming off life support’ but could not deal with more pressure.

‘No-one wants to do that but I reckon the price of beer would probably have to go up 25p-30p a pint to take account of all these increased costs.’

It comes as Mr Sunak has been forced to ditch a 2.84p budget hike in fuel duty because of record petrol prices, with the average forecourt price per litre hitting a record 142.94p on Sunday.

The hated levy was due to go up from 57.95p per litre to 60.79p, potentially costing drivers £66 extra a year per car. But MPs say they have been assured by the Treasury that the scheduled 4.9 per cent rise for 2022 will not go ahead.

Trouble ahead for Dems: A barrage of attacks over the economy

Best Things to See in the Netherlands Besides Amsterdam