The rape of a 12-year-old girl in Uttar Pradesh’s Bulandshahr earlier this month – another in a horrifyingly long line of violent and vicious attacks on women and children – is the subject of a sharp letter from the Delhi Commission for Women to UP Chief Minister Yogi Adityanath.

Among a number of other concerns, the letter, signed by DCW Chairperson Swati Maliwal, highlights the fact police “registered an FIR in the matter (but) failed to add sections of rape”.

Ms Maliwal calls on the Chief Minister to “urgently issue orders to – add relevant sections of rape… take action against negligent officers and provide protection to the girl and her family.”

She also requests the state to “urgently provide a considerable amount of compensation… ensure a proper rehabilitation plan… ensure the trial of the accused takes place in a fast-track court”.

News of the sickening assault on a young girl comes less than a month after Yogi Adityanath – who is bidding for re-election next year – declared “buffalos, bulls or women” were all safe in his state.

“… a 12-year-old girl from Uttar Pradesh is presently battling for her life in a hospital in Delhi. She had been brutally raped by a man… after raping her, inflicted several injuries and tried to strangulate her… I visited her in hospital and she is in a critical condition,” Ms Maliwal wrote.

Ms Maliwal said the girl (who remains unconscious state after being transferred from Bulandshahr to in Delhi, via Meerut) has also “developed a serious neurological issue due to an injury to her brain”.

“… most shocking aspect is that despite the brutality of the crime, while the UP Police registered and FIR in the matter, it failed to add sections of rape! This is deeply distressing.” 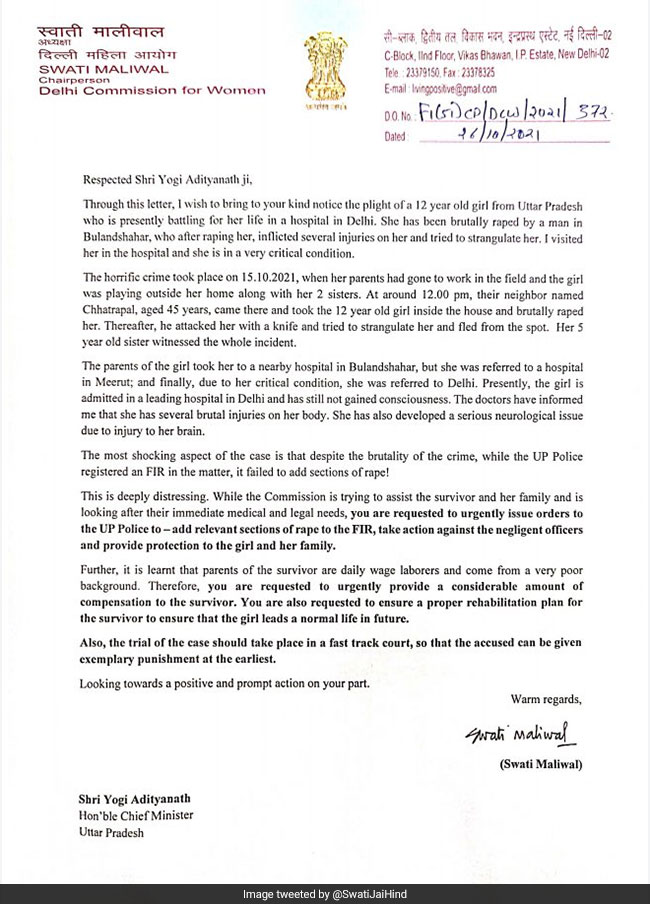 The girl was allegedly attacked on October 15 by her 45-year-old neighbour at noon. The parents were reportedly working in the fields and only the girl and her five-year-old sister were home.

According to Ms Maliwal’s letter, the sister was a witness.

Last year, in the wake of fury over the gang rape of a Dalit woman in Hathras district – a crime that also raised serious questions about the police’s handling of the case – Yogi Adityanath said his government was “committed to the safety, security and development of all mothers and sisters”.

In the days following the Hathras tragedy – which occurred September 14, 2020 – at least two other assaults and alleged rapes – one on a 11-year-old girl – were reported from the state.

Dragging Your Feet? How Lack of Sleep Affects the Way You Walk

Chicken Caprese Salad that is Full of Fresh and Lean Ingredients