There is a satisfying musical buried somewhere in Andrew Lloyd Webber’s “Cinderella,” currently playing London’s West End. But, like the title character, the new show could use a Fairy Godmother’s wand.

Bibbidi-bobbidi-scrap the set and costumes!

What parts don’t need a magic spell’s help right now? The greatest assets of “Cinderella,” unsurprisingly, are its cast and Lloyd Webber’s heart-racing ballads sung on a bare stage.

Cinderella, Georgina Onuorah (she is the alternate, the role is normally played by Carrie Hope Fletcher), makes a striking West End debut with modern pop flair in a song called “I Know I Have a Heart.” She sits, shattered after the ball, on the center of the stage in a big white gown and powerfully wails her pain right to us.

As her Prince Sebastian, a non-traditionally geeky heir, talented newcomer Ivano Turco innocently croons “Only You, Lonely You” about his nascent love for his childhood pal Cinderella. It’s sweet and soaring — Lloyd Webber doesn’t often put those two qualities into one showstopper — and ends on a masterful button by lyricist David Zippel: “Only you can rescue lonely me!” Sublime. 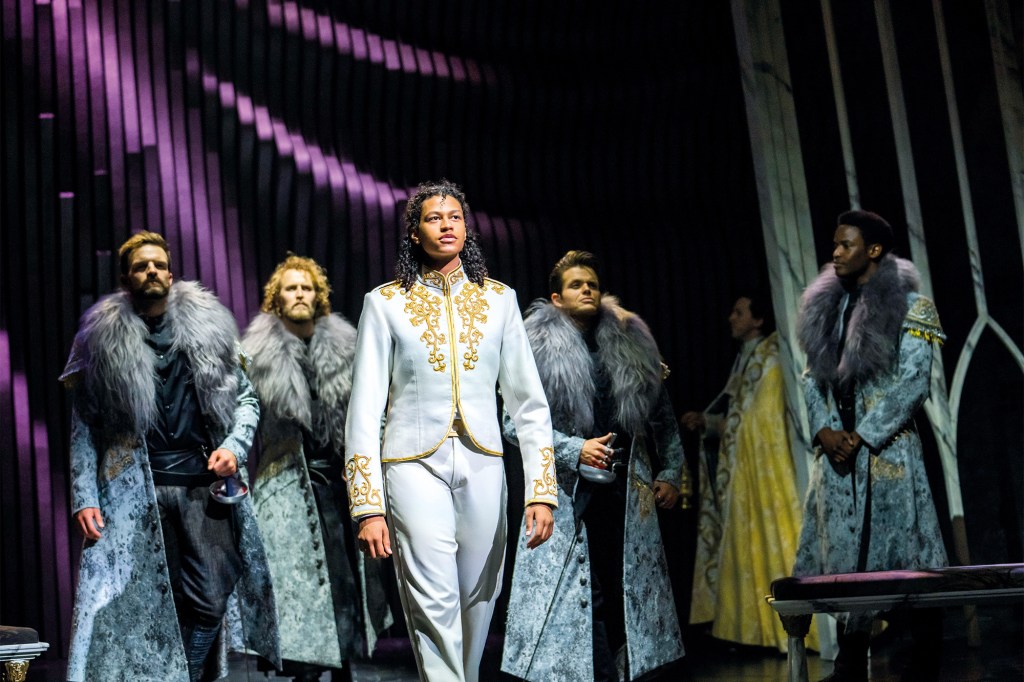 Problem is this revisionist “Cinderella” isn’t dark and brooding like “The Phantom of the Opera.” With a book by Oscar-winning “Promising Young Woman” scribe Emerald Fennell, it fancies itself a musical comedy, like “Guys and Dolls” or “Hairspray.” But at the matinee I attended, the silent crowd might as well have been watching Ibsen.

“Cinderella,” at times, brings a tear to your eye, but almost never puts a smile on your face.

That joylessness needs to be remedied if it wants — as Lloyd Webber recently told The Post it does — to come to Bibbidi-bobbidi-Broadway.

Fennell’s revamped plot starts off campy. Cinders is set in Belleville, a storybook French town that prizes itself on the oo-la-la hotness of its residents. “Every one a chiseled god, with a ripped and rockin’ bod!,” the ensemble sings as director Laurence Connor’s turntable twirls these sexy people around so much you’d think he was auditioning to be a DJ.

Belleville depends, not on farming or textiles to stay afloat, but tourism. The wrench in their plan? Cinderella, a rebellious, angry, black-dress wearing orphan who spews verbal venom and defaces property with spray paint. Her intro tune is “Bad Cinderella” — “Girl from the gutter, unpleasant peasant,” it goes. Because of her goth-y antics, the hamlet loses the coveted “Most Attractive Town” prize.

One girl hurting the local economy by being a teenager is a rather low-stakes plot if you ask me, but the musical quickly forgets about it anyway.

The meat is in the love story. 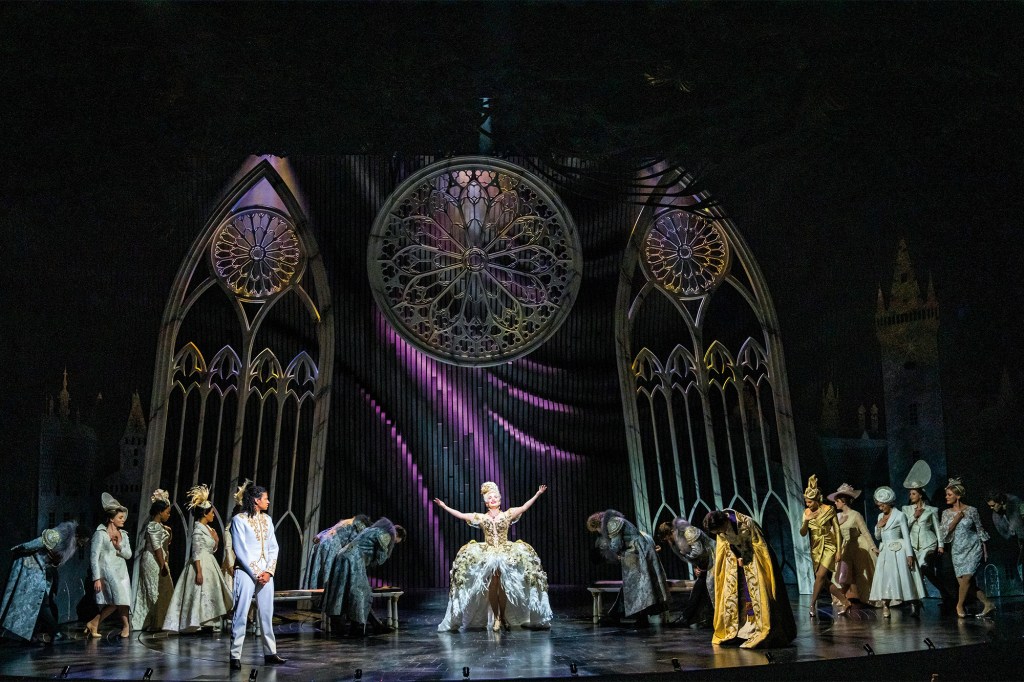 Prince Charming, the town believes, died in war, so now it’s up to his less-buff brother Sebastian (Turco) to marry and become king — because nothing draws crowds like a royal wedding. Seb just so happens to be Cinderella’s only friend, and realizes that she’s been his destined bride all along. In order to put a ring on it, he tells her she must come to the ball and dance with him. Easy enough.

For a straightforward tale, the show takes its sweet time — a good two hours, 45 minutes all told. You think you don’t know what’s going on in a scene, but the answer tends to be “filling time.”

The queen and Cinderella’s step-mother (Rebecca Trehearn and Victoria Hamilton-Barritt, strong comedic talents with meh material) casually plot to marry Sebastian off to one of the evil stepsisters. 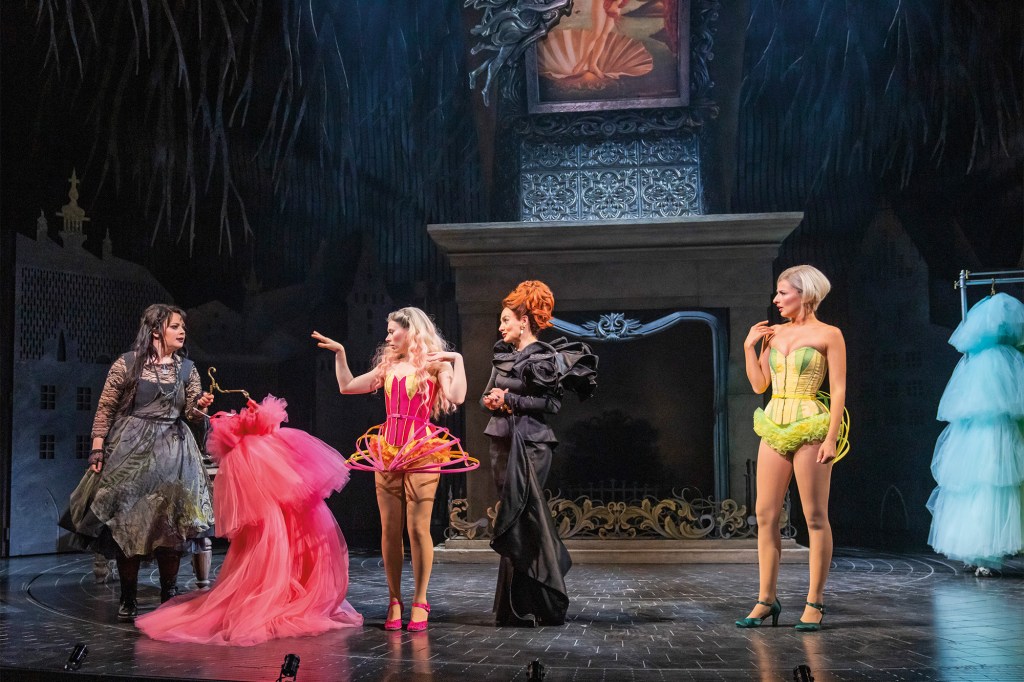 A muscled group called The Hunks dance around shirtless and boast of their masculinity like we’re at a Vegas bachelorette party that also invited children.

The Fairy Godmother (Gloria Onitiri with a booming voice) strangely holds nip-tuck scalpels and syringes as she belts “Beauty Has A Price.”

The show’s last unwieldy half hour shifts settings, from Belleville to Crazytown.

Our confusion is not always the book’s fault. Connor’s plodding, one-note direction is the production’s biggest offender, and Gabriela Tylesova’s drab and forgettable sets and costumes come in a close second, made especially noticeable because Broadway has seen dazzling storybook designs in “Into The Woods,” “Shrek the Musical” and, well, the 2013 revival of Rodgers and Hammerstein’s “Cinderella.”

But off in his own little corner, in his own little chair is Andrew Lloyd Webber and his marvelous musical score, filled with catchy hooks and intoxicating melodies that you’ll want to replay over and over. If the show makes it to Broadway (the Shubert Organization’s Bob Wankel was supposed to fly out to see it today, but delayed his trip at the last minute), let’s pray his collaborators meet him at the ball.

What is the Filibuster and Why is Everyone Talking About It? | by Keani Vierra | Voterly | Jan, 2022

One Win Away From Postseason, Garoppolo Injury Update, More

How to Use Social Listening to Improve Your Business