It might seem hard to believe, but until now Roland hasn’t had a true competitor to Korg’s seemingly ubiquitous Volca line. Sure, the Boutique range is portable and battery powered, but they’re also twice the price of a Volca. And that’s without the keyboard accessory. Now, though, the company finally seems to be taking the entry level seriously with the Aira Compact series.

These new $199 instruments borrow tech from their big siblings in the Aira line, like the VT-4 Voice Transformer and the TR-8 Rhythm Performer. The T-8 is a drum machine that uses Roland’s Analog Circuit Behavior (ACB) to recreate sounds from the 808 and 909, and the J-6 Chord Synth does the same, but for the Juno-6. While there’s certainly nothing wrong with having more portable budget synths and drum machines, it’s the E-4 Voice Tweaker that really stands out. It brings pitch correction, a harmonizer, vocoding, plus pitch and formant shifting and a looper to the world of mobile music hardware.

The ability to connect all three Aira Compacts, without the need for an external mixer, is undeniably huge. When you’re trying to craft a portable music making setup the less gear and cables, the better. 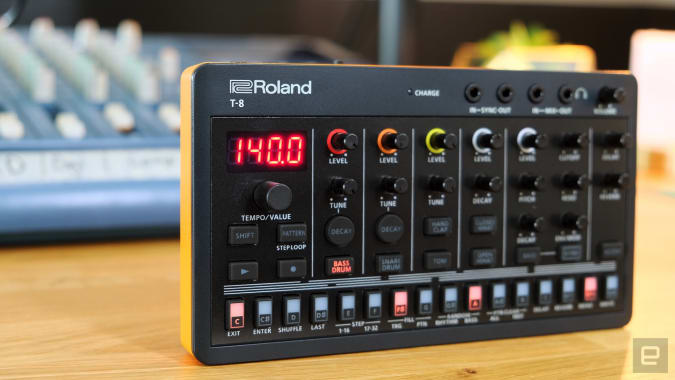 The T-8 is definitely the most straightforward of the three, and probably the most immediately usable. While it has more advanced features, anyone who’s ever used a step sequencer before should immediately be able to start putting together basic beats. While I guess I should be thankful that you get 32 steps instead of a measly 16, it doesn’t feel like it would strain the hardware terribly to go for a full four bars.

Thankfully, there are some tools at your disposal to switch things up. There is a fill mode, plus step looping for creating instant custom fills by just holding down a few buttons. There’s also per-step and master probability options for introducing a touch of unpredictability, plus substeps, send effects, accent and velocity parameters. In some ways, it’s a more capable sequencer than you’d find on a Volca Beats. That said, Korg has automation in the form of Motion Sequencing, which the Aira Compacts lack.

After the Met Gala, the Beauty World Has Its Own Celebration

US To Reduce Nicotine In Cigarettes To Non-Addictive Levels: Report

This Tramontina Saucepan Is on Major Sale on Amazon Right Now