A recreation of Viking structures at L’Anse aux Meadows
Dylan Kereluk via Wikimedia Commons under CC by 2.0

Three rough pieces of wood—discarded sections of branches and tree stumps found among the refuse Vikings left behind after their short sojourn in Newfoundland—have turned out to be some of the more important evidence of the Norse in North America. The scars left by iron blades on these sections of fir and juniper can still be seen after more than 1,000 years. Was it the legendary Viking explorer Leif Eriksson himself whose blade chopped off these unwanted scraps? Might it have been Thorfinn Karlsefni or his wife, Gudrid, the lesser-known explorers of a different Viking saga who tossed these useless scraps aside? Many questions may never be answered, but researchers now have an extraordinarily precise date for when Norse hands and blades worked in the New World.

A new study of wooden artifacts found at Newfoundland’s famed L’Anse aux Meadows site shows that Vikings lived, and felled trees, on North American soil exactly 1,000 years ago—during the year 1021 C.E. The evidence, published today in Nature, means that these Norse seafarers accomplished the earliest known crossing of the Atlantic from Europe to the Americas. Such incredibly precise dating of the wood was possible thanks to an intriguing new method that examined growth rings for a once-in-a-millennium cosmic-ray event that showered Earth with high energy particles in 993 C.E. Finding that telltale spike in the tree rings allowed scientists to count additional rings outside that mark to pinpoint the exact year the Vikings cut fir and juniper trees here, as they lived and explored on the edge of the continent.

“I am impressed by the results,” says Thomas McGovern, an archaeologist at Hunter College in New York City who was not involved in the research. “The site continues to provide data after all these years. I think the date is totally plausible and fits with Birgitta Wallace’s original idea of a fairly short, circa 1000 [C.E.] settlement event,” adds McGovern, who has spent some two decades studying the demise of Norse settlements in Greenland. Wallace, a former Parks Canada archaeologist and co-author of the research, spent many years working at the L’Anse aux Meadows site.

Moving across the frigid waters of the North Atlantic in their legendary longships, a few thousand Vikings colonized Greenland for almost 500 years, building churches and communities, keeping records, and maintaining ties with Europe before mysteriously vanishing for reasons that still stir debate. They left behind clues—bones, artifacts, cloth and other remnants—with which scientists are still piecing together their story. The Vikings’ Icelandic sagas spoke of the intrepid voyagers journeying even further than Greenland—to a mysterious place they called Vinland, which was described in detail. Inspired by the sagas, researchers searched for traces of Vikings in the Americas for years, but it wasn’t until the 1960s that L’Anse aux Meadows at last proved that the tales of Norse in North America were true.

The remains of eight sod and timber buildings were found, including workshop spaces and a forge used to craft iron tools. Experts consider L’Anse aux Meadows a base for further explorations, a site where Norse might overwinter, repair their ships, or stockpile provisions and trade goods. Such sites are described in the sagas as key waypoints in the Vinland adventures of explorers like Eriksson. “Here we are fixing in time these somewhat legendary [Norse] sagas,” says co-author Michael Dee, who specializes in the study of isotope chronology at the University of Groningen. “We’re providing some scientific evidence to say at this exact moment in time, this happened, which actualizes them a bit more.”

Timber was critical for the Norse in Newfoundland. Wood provided fuel for heat and cooking, as well as material to construct timber and sod buildings and famous Viking longships. Hundreds of wood chips, shavings and discarded pieces have been found from the workshops at L’Anse aux Meadows. Co-author Margot Kuitems, also of the University of Groningen, sorted through wood scraps from L’Anse aux Meadows at a storage facility in Dartmouth, Nova Scotia, where the excavation’s archaeological remains are stored. She selected three wooden artifacts that she knew were produced by Vikings, not only because they were found in context at the site but also because they showed clear markings of being cut and shaped with metal tools, which weren’t used by the area’s Indigenous residents.

Kuitems wasn’t looking for outstanding examples of Norse woodworking skill. “What we used was basically rubbish,” she says, “which was really good for research because we were looking for pieces of wood that included their bark edges. If you have an artifact or even a construction beam, often those outer layers are stripped off.” The bark would be part of the ingenious dating method’s endgame. 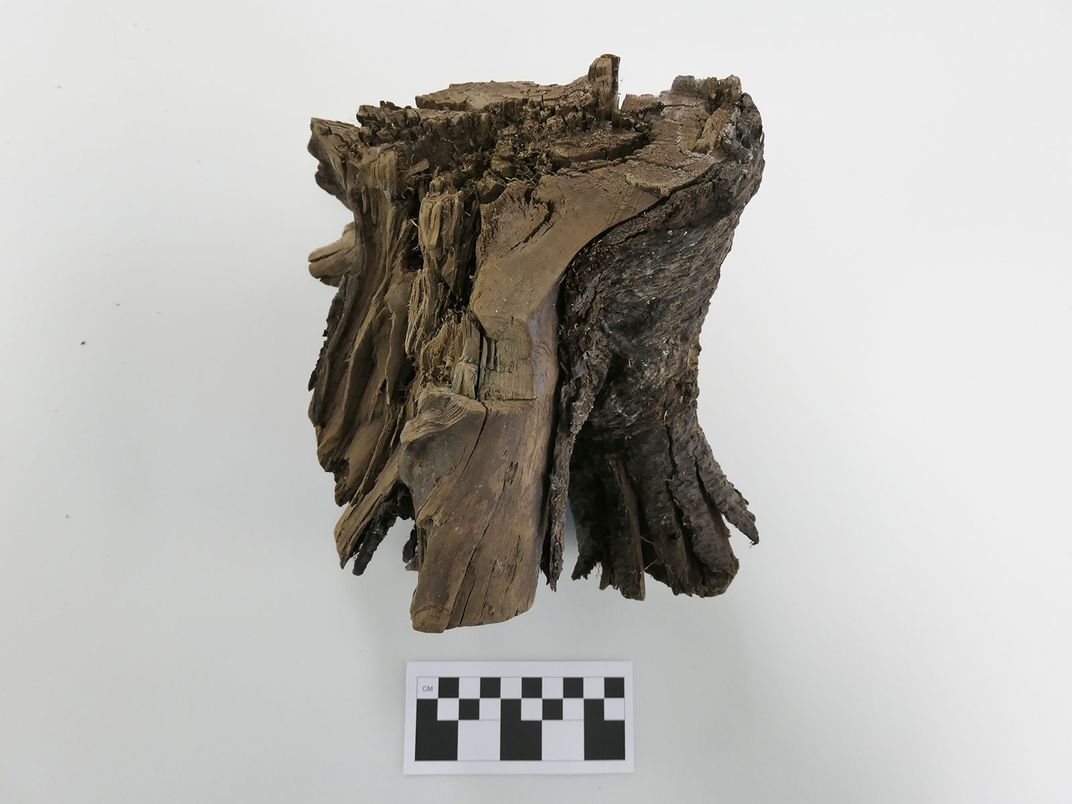 Dendrochronological archives from around the world, in Germany, Ireland, Arizona and Japan, provide evidence that in 993, a cosmic radiation event, probably an enormous solar storm, caused a huge spike in atmospheric carbon levels that can clearly be measured in tree ring samples. “On rare occasions, once or twice a millenium, you get these blips in the record probably from solar storms that created a sudden surge of radiocarbon that gets absorbed by that tree ring,” Dee says.

After identifying the 993 anomaly in the tree ring history of each artifact from the Viking settlement, it was a fairly simple matter to count each year’s growth ring all the way to that critical bark layer still clinging to the wood. The team determined that each of the three different trees used to produce the wooden artifacts was felled exactly 28 years after the major cosmic-ray spike, in 1021, an apparently busy year of woodcutting for Norse in North America. By examining cells on the bark edge, the group could even determine in what season of the year each tree was felled.

Iceland’s Vikings chronicled their trips to what they called Vinland (i.e. today’s Canada and possibly the United States) in two great epics of Norse literature: The Saga of Erik the Red and The Saga of the Greenlanders. These adventurous works of literature relay compelling tales of heroism, treachery, triumph and tragedy that intersperse real historical persons and events with colorful myths—Icelandic stories of the era boast their fair share of trolls, witches, and dragons. The known versions were written around 1200 or 1300, several hundred years after the events they chronicle, meaning they likely represent older oral histories, possibly embellished with retellings down through the years.

The sagas differ in some details, like which explorers were preeminent and deserve the most credit, but they tell how Vikings first spotted unknown North American locations when blown off course during travel from Iceland to Greenland. They later journeyed from Greenland to explore those far coasts under leaders like Eriksson and, later, Karlsefni and Gudrid.

According to the sagas, the Norse found plenty of fish and game, timber, and pastureland during their explorations of Vinland. They described establishing several base camps—L’Anse aux Meadows appears to have been one—that enabled further explorations of these strange shorelines. Butternuts and butternut tree fragments found at the site suggest they traveled south of Newfoundland, where those species have never grown, but just how far they went remains anyone’s guess. Thorfinn and Gudrid’s son Snorri even became the first known European baby born in the Americas.

For reasons that are still debated, the Norse never ventured beyond Greenland to settle other parts of North America for the long term. One factor might have been relations with Native Americans, whom the Norse deemed “wretched people.” The sagas tell of trade between the groups, but also of bad blood and violence. And the Norse may not have established sustainable settlements in Newfoundland because they would have required too many individuals and resources from Greenland’s own small Norse populations.

Though the new study shows that the journeys chronicled in the sagas actually happened, it can’t solve these historic mysteries. “All we can really say is that they were definitely there in that year,” Dee notes.

Viking chronologies are reasonably well known thanks to some strong evidence from other locations. Icelandic sites, for example, often have quite precise dates thanks to the island’s volcanic activity, which lays down layers of tephra, ash and debris that can be matched with the known timings of eruptions. These clues, along with the narratives of the sagas, have combined to paint a picture of Norse exploration and voyaging between Iceland, Greenland and Vinland that fits the new L’Anse aux Meadows dates quite well.

“On the one hand it does fit well with what was expected from the sagas, it’s close to what people thought,” Dee says. “But I think most of the saga experts would have been looking for a date in the 990s or around 1000, so at the same time I think it will surprise them a little bit.”

Though only perhaps 20 years later than what might have been suspected, the precise date may have some interesting implications.

“It adds some intrigue,” says John Steinberg, an anthropologist at the Fiske Center for Archaeological Research at the University of Massachusetts Boston. “If the Vikings left Greenland around 1000, as the sagas suggest, L’Anse aux Meadows was occupied at least sporadically for perhaps 20 years, rather than just three years as has been assumed. On the other hand, it may be that it was only occupied for three years but those years were 15 years later than we thought.”

Steinberg raises another possibility as well—that the Vikings went back and forth between Greenland and Vinland more commonly than has been believed. “There are hints of that in the sagas. But because they are just hints, fleshing that out has been really difficult.”

Such travel is certainly possible from a seafaring perspective; as both raiders and traders, the Vikings were amazing sailors. The Vikings undoubtedly knew their way around their part of the world and traveled widely from about 793 to 1066. The Norse sailed from Scandinavia west to the British Isles, settled Iceland by 874 and continued exploring until they eventually became the first to cross the Atlantic. But they also ventured east into Russia, traveling the river valleys. Some Norse individuals even left mysterious runes in Istanbul, Turkey and Athens, Greece.

Cosmic ray events like the 993 burst are very rare in the historical record. But because they are global in scope, their telltale signatures can be found in trees and wood around the world. That means the innovative new dating technique Kuitems and Dee used will likely be employed at archaeological sites far and wide.

“The possibility of returning exact year results, from any scientific dating method, is very new indeed,” Dee notes, “and this method is just getting underway in terms of what it’s going to be capable of doing.”

How to Make Coconut Better: 10 Tips for the Best Coconut Butter Ever