Ukrainian soldier looks out from his trench, somewhere on the Donbas front line. The logs overhead protect from Artillery shrapnel.

Yesterday, Ukrainian President Volodymyr Zelenskyy was complaining about the “Groundhog Day” of having to repeat time and time again his nation’s critical defensive needs. What a difference a day makes, with hundreds of millions of dollars of aid streaming in daily. He now sounds … happy?

Zelensky, tonight: “I am very pleased to say, with cautious optimism that our partners started to understand our needs better … And when exactly we need this. Not in weeks, not in a month, but immediately. Right now, as Russia is trying to intensify its attacks.”

The New York Times has a great story on the massive logistical effort to move weapons to Ukraine. One of the big takeaways: nations are flooding gear into Ukraine, but few want to actually talk about it: “[N]ations are trying not to advertise to Moscow exactly what is being provided. France says it has supplied 100 million euros of military equipment to Ukraine, without specifying what it has sent. Some countries have no desire to goad the Russian bear.” There’s also this sentence, which is either the scoop of the week, or an embarrassing journalistic error:

The United States has also agreed to provide some 155-millimeter howitzers, along with 40,000 matching rounds, while trying to buy Soviet-standard ammunition from countries that use it, including nations outside of Europe, like Afghanistan and even India, a longstanding buyer of Russian arms.

The U.S. is trying to buy weapons from the Taliban? Did India, one of the few nations still happy and eager to do business with Russia, actually get approached to sell arms headed to Ukraine? Did they say “yes”? In any case, 30 countries are assisting Ukraine in its war effort, which is 30 more than are assisting Russia, all coordinated by the United States. No one does logistics like the United States.

Meanwhile, Russia’s broad-based assault along the entire Donbas front has netted them some small gains.

With 🇷🇺forces gains in the areas between Rubizhne and Lyman, it is possible that the 🇺🇦forces are withdrawing across the Siverskyi Donets river (dotted black line) to take advantage of the natural defence that it could provide. pic.twitter.com/zUt2QiL1pN

Losing any ground sucks, of course. But the tactical withdrawal is a legitimate tool in any army’s toolbox, and Ukraine has several layers of defensive lines set up. None of these losses are particularly strategic, the way Izyum was. If the plan is to fall back behind the Siverskyi Donets river, you better believe dug in positions are already in place, but with a river assisting in the defense—just like the Irpin halted the Russian advance toward northwest Kyiv. Ukraine’s Severodonetsk salient is unfortunately becoming more and more exposed, with a city that has been absolutely pummeled sine the beginning of the war. There were celebrations in pro-Russian channels last night that Ukraine was falling back from Severodonetsk, but I’ve seen no real confirmation. Ukraine did announce that every single food storage site in the city had been destroyed by Russian shelling and the city was full cut off from supplies, which certainly seems ominous.

In total, Ukraine’s General Staff claimed 10 Russian attacks yesterday, which is double the intensity of the previous weeks, when we’d see four to six daily attacks. The Institute for the Study War noted that “Russian forces have not achieved any major breakthroughs, nor have they demonstrated any new capability to conduct multiple successful, simultaneous advances.” You know me, I don’t see how Russia gets its shit together. If a “major offensive” ever materializes, I suspect it’ll feature troops rushing forward as someone yells “charge!” except that half the troops won’t hear it because their radios won’t work or were sold for booze, while another quarter will be like “no thanks.” Ukrainian defenses will inevitably be pushed back from sheer numbers, but then what? Russian losses will continue to be horrific, while Ukrainian reserves gear up in the west, and heavy artillery, suicide drones, and more armor joins the fight.

Strelkov Igor Ivanovich is a Russian nationalist who formerly served as minister of defense of the Donetsk People’s Republic (one of the two separatist regions in Donbas). He’s turned into a fierce critic of Russia’s management of the invasion: (Run through Google Translate)

If the enemy [Ukraine] had few forces, the protection of communications [supply lines] could be partially ignored. But the Armed Forces of Ukraine (thanks to mobilizations) already have enough forces—comparable to the number of our troops in the theater. In addition, the enemy has the ability to shorten the front line and transfer the released forces to threatened areas—the Russian Federation does not have complete air supremacy simply because of the insufficient number of strike aircraft and the negligible number of strike drones. At the same time, the enemy can hold the front line near Donetsk with relatively small forces due to the excellent engineering equipment [trenches] that has been produced for many years […]

Thus, after some time in these areas, the situation will repeat itself, which already exists in the areas of Rubizhnoye-Severodonetsk, Popasnaya, Avdeevka and Marinka, where the Allied forces are moving forward very slowly and with very heavy losses (especially in the infantry). Or they don’t advance at all (Avdeevka).
The enemy is “more than completely” satisfied with this method of warfare. Why? – Because the Armed Forces of Ukraine need another one and a half to two (maximum —three) months to prepare large reserves […] while Russian forces “bleed”, storming the fortified cities of Donbass […]

In this regard, I remind you that the so-called “Ukraine” is finishing the THIRD STAGE OF GENERAL MOBILIZATION. It has a human resource (200-300 thousand people) and a technical capability (a huge flow of various weapons from Europe and the USA) to not only maintain a sufficient number of its troops at the front, but also create new reserves. And to create them “in quantity” (even 100 thousand people – this is about 50 battalion tactical groups, including reinforcements and rear infrastructure – that is, about 10 full-blooded divisions).

“So-called ‘Ukraine…’” My god these people are assholes.

Ivanovich does an audit of reserves available to Russia forces, and basically concludes they can’t keep up without a general mobilization in Russia itself, which Vladimir Putin seems wholly uninterested in pursuing. Now Ivanovich has an ulterior motive—to convince Russia to fully mobilize and fully commit to the war, instead of depending on his home region’s almost-depleted supply of cannon fodder, in Donbas. After all, they’re conscripting men as old as 60. They’re scraping the bottom of the barrel.

But he is right—the best case scenario for Russia at this point is the conquest of the Donbas pocket still held by Ukraine: 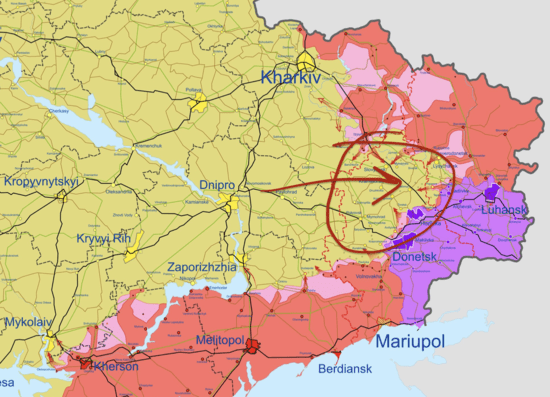 In reality, Russia likely doesn’t have enough troops to take that entire territory (from top to bottom it’s 200 kilometers of distance, or 120 miles), but if they did, they certainly won’t have manpower and logistical juice to push beyond. Meanwhile, Ukraine is building and modernizing its armed forces, and before long will have the offensive capability to seriously contest its lost territory—including territory lost in 2014.

The rain will end Sunday, and then it looks sunny and warm, in the mid-70s and 80s next week. That means the ground will start to dry out, which will make it easier for armor to move. Let’s hope rain returns to the forecast soon, keeping General Mud in the fight as long as Ukraine is on the defensive.

Looking to the south, however unlikely, it sure would be nice to liberate Kherson this week.

🇺🇦Operational Command South reports that Russia has sped up its preparations for the sham referendum to proclaim the “Kherson people’s republic”https://t.co/8W0wstu779

A Simple Guide to Understanding the Delta 8 Flower