Gemma Chan has been a red carpet fixture across the pond for years. The British-Chinese actress is beloved for her sensational style, and her consistency is particularly exceptional: going back to the beginning of her career in 2006, Chan has been polished and flawless from the get-go. She graduated from Oxford with a degree in law, and famously turned down a solicitor’s apprenticeship at a law firm in order to pursue acting. Roles in iconic British TV shows like Doctor Who, Sherlock, and The IT Crowd gave way to coveted film roles in Fantastic Beasts and Where To Find Them and Jack Ryan: Shadow Recruit. Along the way, Chan shut down the red carpet with her immaculate glamour. But it wasn’t until her performance in 2018’s hit movie Crazy Rich Asians as Astrid Leong-Teo, the fashionable entrepreneur whose supreme aesthetics are eclipsed only by her kind heart, that audiences worldwide fell in love with the star.

Nowadays, red carpets and fashion shows aren’t complete without Chan’s magnetic presence. Whether she’s wearing a minimal column dress or billowing, architectural Louis Vuitton gown at the premiere of Marvels’ Eternals, she’s the picture of perfection. Click through to see her red carpet evolution as her starlight has grown, but take note of how she’s always looked ready for the drama success she’s found in Hollywood.

Chan stunned in this Louis Vuitton gown at the Eternals premiere in October 2021. The cape is constructed entirely of feathers, while the delicate lace skirt recalls the gentle spirit of her character, Sersi. 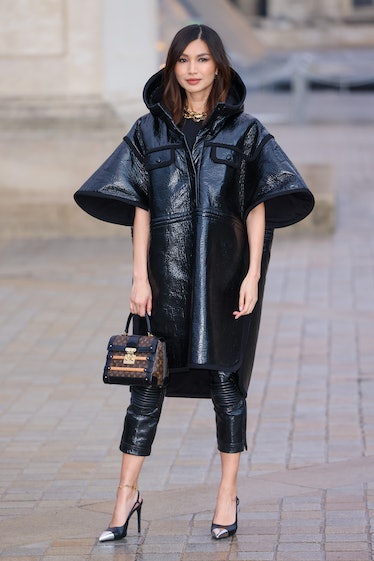 At Paris Fashion Week in October 2021, Chan attended the Louis Vuitton show in an outfit from the atelier; this all-leather look by creative director Nicolas Ghesquière shows off his love of modular, geometric shapes. 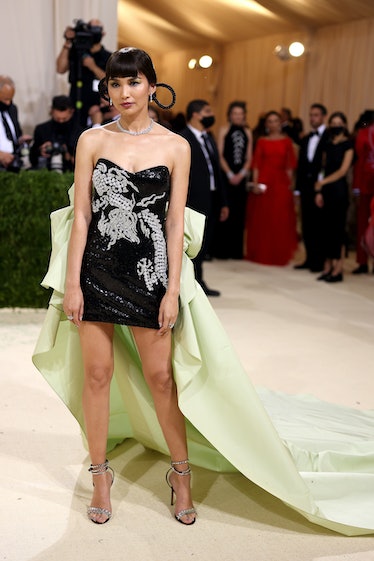 At the 2021 Met Gala (held in September 2021 due to pandemic), Chan wore this sculptural custom piece by Singaporean-American designer Prabal Gurung. The dragon design was sourced from a Qing dynasty-era Chinese textile—which dates back to around the 1660s. 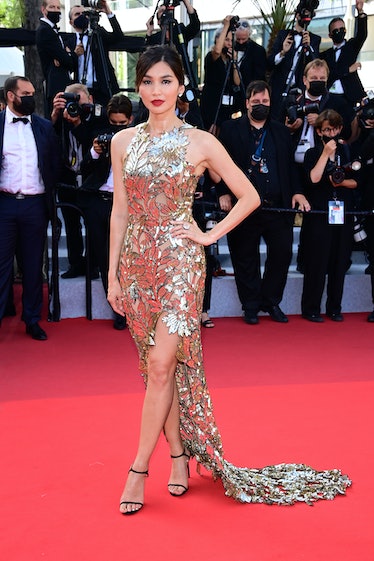 One of Chan’s most lavish looks to date, this sequined Oscar de la Renta gown stopped us all in our tracks at the OSS 117: From Africa With Love screening. 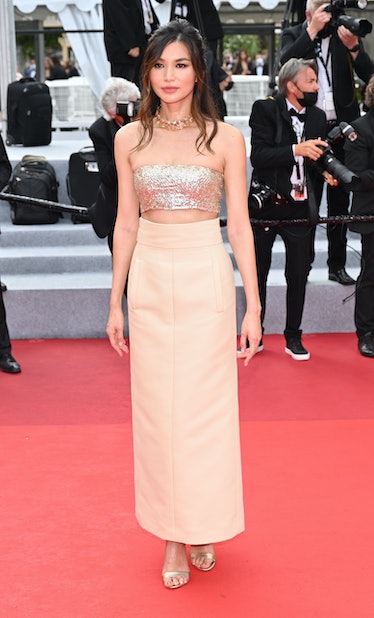 Chan loves Valentino, and at the Cannes screening of Les Intranquilles (The Restless), this two-piece kept her cool in the hot Italian summer. 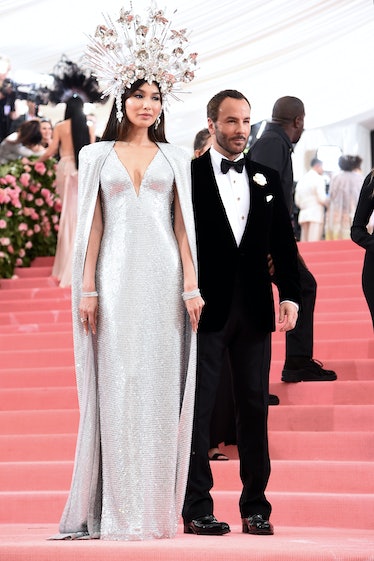 Gemma Chan arrived at the 2019 Met Gala as the date of designer Tom Ford, wearing one of his signature exquisite column dresses. She’s an absolute vision on the pink carpet with the squared cape and dramatic silver headpiece, which was inspired by one worn by Elizabeth Taylor in the 1960s. 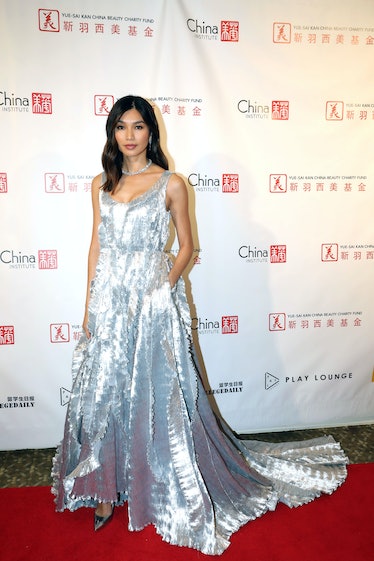 Chan honored Chinese fashion designers in this eye-catching silver gown by Mark Gong in May 2019. 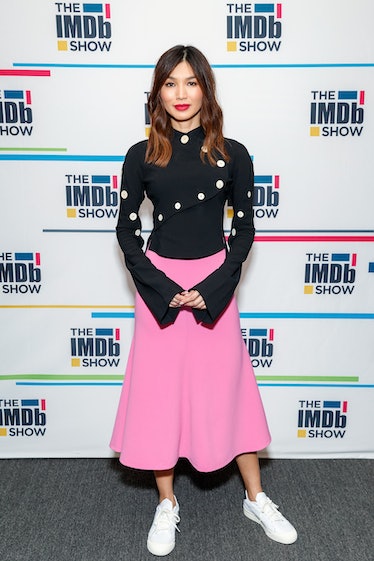 Even her casual style is meticulous, as seen in this March 2019 photo. She’s wearing Awake Mode with Adidas sneakers for cool comfort. 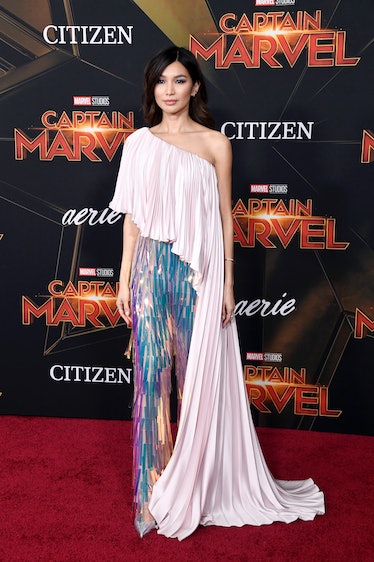 Another breathtaking look, this time in iridescent Ralph and Russo for the March 2019 premiere of Captain Marvel in Hollywood. 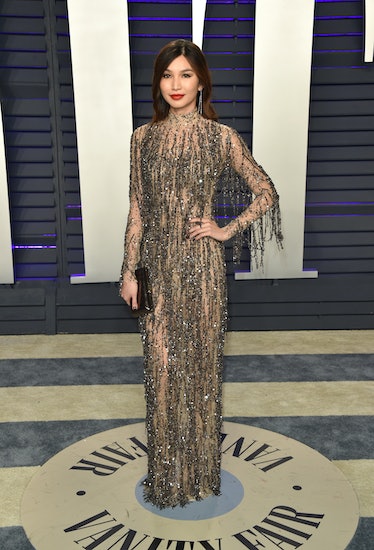 Chan continued her love affair with silver in this Tom Ford gown, dripping with sequins and a tiny clutch at the Vanity Fair Oscars afterparty. 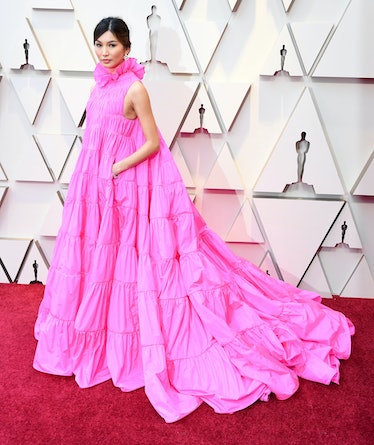 Without a doubt, Chan was one of the best-dressed at the Academy Awards in February 2019; her pink tiered gown by Valentino famously had pockets, a detail cheered on by every woman on the planet. 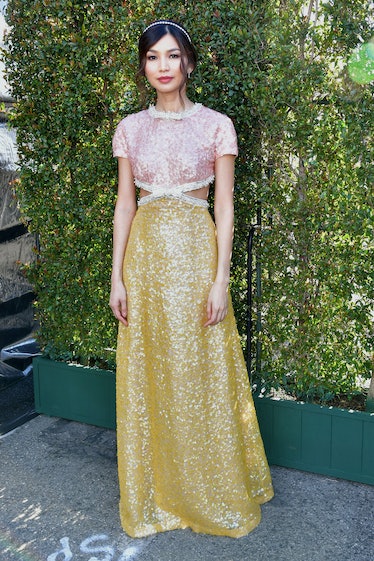 At the ISP Awards in February 2019, Chan wore this bi-colored Miu Miu dress that was fit for a princess. 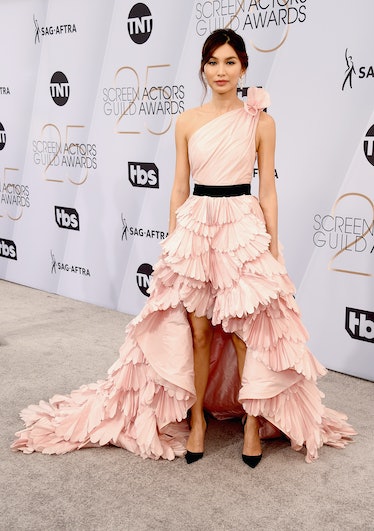 Photo: Dipasupil/Getty Images for National Board of Review. 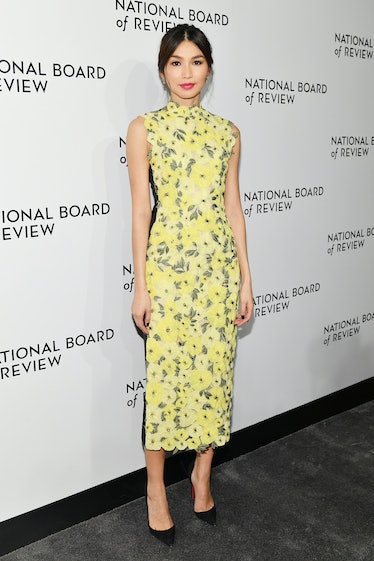 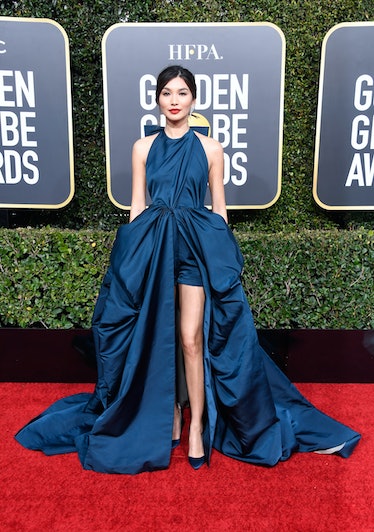 This is what red carpet moments are made of. Chan’s sumptuous navy blue halter gown by Valentino was as bold as it was beautiful. 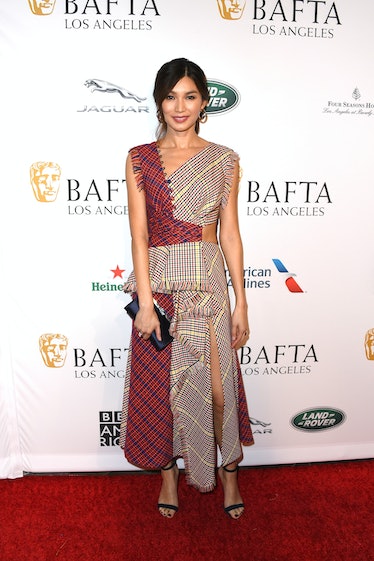 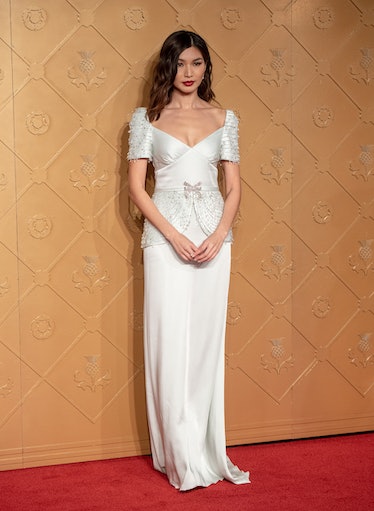 Naturally, the December 2018 premiere of Mary, Queen of Scots necessitated a gown fit for a royal, and Chan nailed it in Miu Miu. 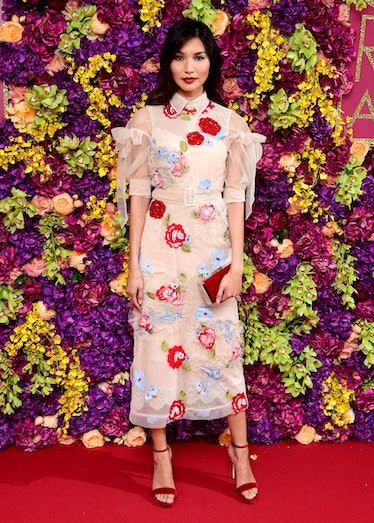 Crazy Rich Asians was a breakthrough for Asian actors, screenwriters, and audiences. For the September 2018 London premiere, Chan wore this tulle floral Simone Rocha piece; Rocha is Irish and Chinese. 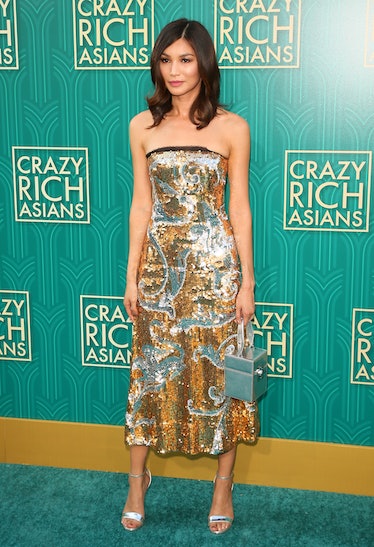 Astrid herself would have loved this Art Deco-inspired Oscar de la Renta dress.

2016: Fantastic Beasts and Where to Find Them Premiere 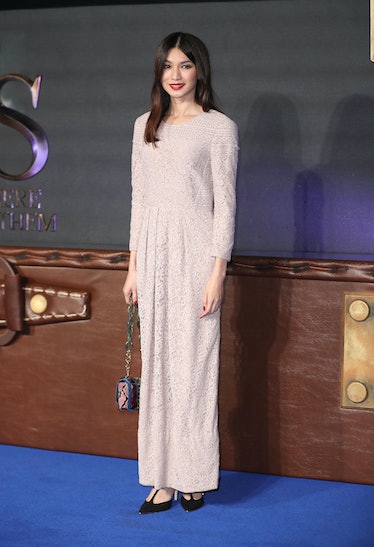 Chan adores a long-sleeve silhouette, as seen at the November 2016 premiere of Fantastic Beasts. 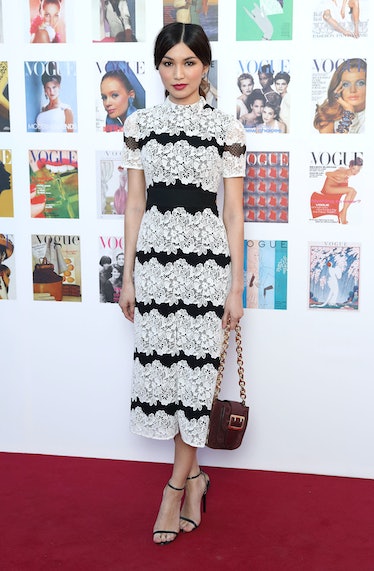 Tea-length perfection in May 2016. 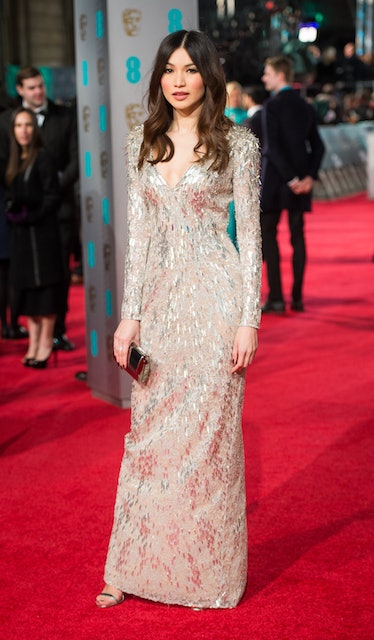 At the EE British Film Academy Awards in 2016, Chan’s red carpet prowess is coming into its own, as she dazzles in this metallic gown. 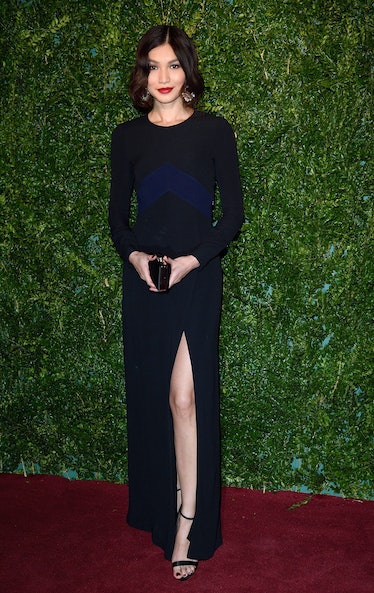 This photo may be from November 2014, but Chan’s style star power is evident here in this black and blue dress, accented with strappy heels and a tiny clutch. 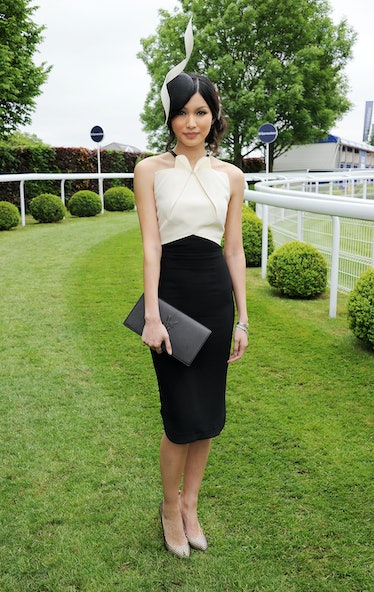 In June 2013, Chan was the face of the Investec Derby Festival, and as is customary, she wore an architectural fascinator to host the event. 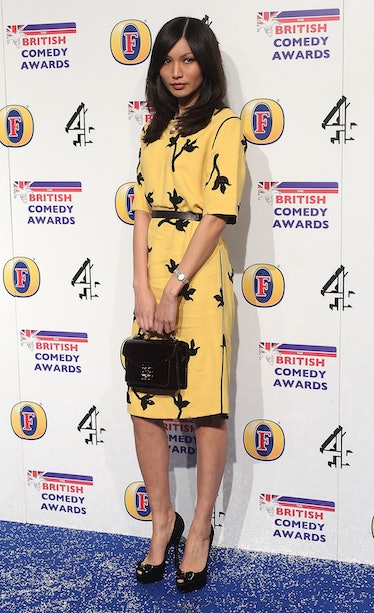 Chan is impeccable in this yellow midi dress at the December 2012 Britian Comedy Awards. 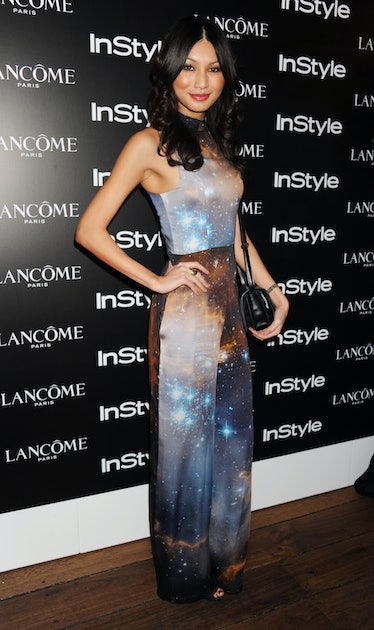 Why No Tusks? Poaching Tips Scales Of Elephant Evolution

Giants get torched by Justin Herbert in ugly loss to Chargers