Cristiano Ronaldo has scored 137 goals in the Champions League

Cristiano Ronaldo headed the winner nine minutes from time as Manchester United came back from two goals down to record a memorable Champions League triumph against Atalanta at Old Trafford.

Ole Gunnar Solskjaer’s side had been booed off at the break, such was the lack of invention they showed in falling behind to goals from Mario Pasalic and Merih Demiral.

But the jeers turned to cheers as United, roared on by an increasingly frenzied crowd, rallied to complete one of their great European victories.

Marcus Rashford reduced the deficit with an excellent finish eight minutes after the restart before skipper Harry Maguire drove home after being left free at the far post to get on the end of Edinson Cavani’s flick.

But, inevitably, it was Ronaldo who won the game, just as he did three weeks previously against Villarreal.

This time it was with one of his trademark headers as he rose to meet Luke Shaw’s cross and find the bottom corner to send United to the top of Group F.

Solskjaer’s success when it matters

This was another one of those nights when Solskjaer seemed to pull it out of the bag just as his Old Trafford reign was about to be seriously called into question.

However, the home fans at least made their feelings known before kick-off with a long rendition of ‘Ole’s at the wheel’, before the familiar ‘Ole, Ole, Ole’ chant rang round Old Trafford.

Once the game had started, ‘Who put the ball in the German net’ was heard. That song is in honour of Solskjaer’s most famous goal, the Champions League winner in 1999 that ensures he will always be a hero at the club, no matter how his managerial reign works out.

The problem for Solskjaer is that the managing bit has not been going well at all.

Brave enough to drop Paul Pogba following Saturday’s defeat at Leicester, when the United boss bemoaned his side’s defending at set-pieces and said something had to change, Solskjaer was rewarded by one of the Frenchman’s midfield replacements going missing for the Atalanta opener before his side conceded a second at a corner.

From a position of limited danger, United were suddenly in loads of it, purely because Davide Zappacosta’s overlapping run went completely unchecked as Scott McTominay failed to react. The low cross invited the finish, which Pasalic duly applied from inside the six-yard box.

It was the fifth time in seven home Champions League games under Solskjaer that United had fallen behind.

For the second, Demerai simply wanted it more as he climbed highest at a corner to power in the second, with both Shaw and Maguire ineffective in response.

There had been agitation before the half-time whistle, which brought a lot of boos, before the singing section close to the tunnel offered more positive support, which Solskjaer acknowledged as he made his way towards the dressing rooms. 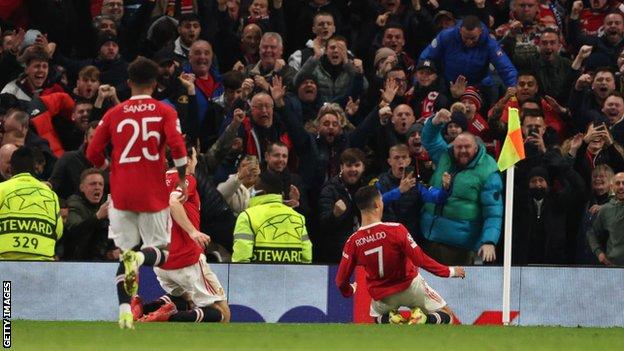 Given the 45 minutes that had gone before and the task that lay in front of them in the second period, it was something of a surprise Solskjaer did not make a change at the break.

It was almost a ‘you got us into this mess, you get us out of it’ move by the United boss. And it worked.

United tore into their opponents and both Ronaldo and Rashford could have scored before the England man did, converting a brilliant pass from Bruno Fernandes by opening his body up and finding the far corner.

McTominay hit a post and Ronaldo had another shot saved as United continued to build pressure, in much the same way as Sir Alex Ferguson’s great teams used to when they found themselves in a spot of bother.

The problem is Ferguson’s teams tended to be defensively secure. Solskjaer’s most definitely is not and David de Gea needed to make acrobatic saves to deny Luis Muriel and Ruslan Malinovskyi at a point when had they conceded again, United would surely have lost.

As it was, they survived, regrouped and – with Pogba, Jadon Sancho and Cavani introduced – went again.

Maguire’s finish had plenty of feeling behind it. So had Ronaldo’s celebration as he sank to his knees and did a double fist-pump after once more becoming the United hero.

With Liverpool, Tottenham, another meeting with Atalanta and Manchester City to come before the next international break, no-one can be too sure where United go from here.

But this game won’t be forgotten in a hurry.

DR LOUANN BRIZENDINE as she explains how the female brain works

Top 4 to Manage Servers and Websites

Tesla’s Shareholders to Vote on 3-to-1 Stock Split In August, Elon Musk’s Ally Ellison to Leave Board