LONDON — The Jacksonville Jaguars ended their 20-game losing streak when Matthew Wright kicked a 53-yard field goal as time expired in a 23-20 victory over the Miami Dolphins on Sunday in London.

Trevor Lawrence connected on a short slant pass to Laviska Shenault Jr. and the Jags (1-5) called timeout with 1 second remaining after the Dolphins (1-5) gambled on a fourth-and-1 from their 46 and came up short.

Lawrence threw for 319 yards and a touchdown as he and coach Urban Meyer finally earned their first NFL victories — even if it required a trip to Europe to get it done in a “home” game at Tottenham Hotspur Stadium.

The Dolphins lost their fifth consecutive game, spoiling the return of Tua Tagovailoa, who made his first start in a month. The second-year quarterback threw two touchdown passes to Jaylen Waddle.

Jaguars kicker Matthew Wright (15), center, celebrates after kicking a field goal to give the team a win over the Dolphins.AP

The Dolphins took a 20-17 lead when Tagovailoa finished a seven-play, 91-yard drive with a 2-yard touchdown pass to Waddle with 10:22 left in the game. Waddle caught the ball and stuck it over the goal line as cornerback Nevin Lawson tackled him.

Jacksonville grabbed a 17-13 lead early in the third quarter on James Robinson’s 1-yard run after he rumbled 24 yards on the previous play. The drive included a 29-yard reception by Jamal Agnew and an unnecessary roughness penalty on Miami safety Jevon Holland.

Tagovailoa and the Dolphins offense started hot, scoring on their first drive, but squandering two other chances from inside the Jacksonville 10, settling for field goals both times. 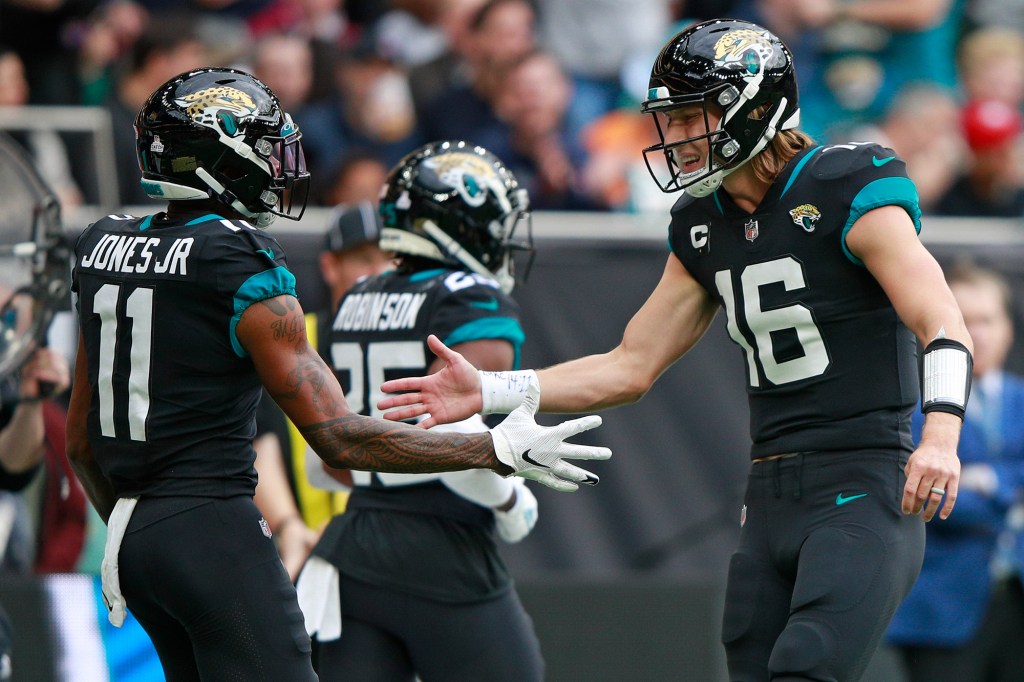 On the opening drive, Tagovailoa completed eight of 10 passes and finished a 75-yard opening drive with a 6-yard slant to Jaylen Waddle to put Miami ahead 7-0. They converted three third downs including a 20-yard reception by tight end Mike Gesicki and Tagovailoa’s 7-yard scramble to the 6, setting up Waddle’s touchdown.

The Jaguars answered with big plays of their own, when Lawrence connected with Agnew for a 24-yard gain on their first play from scrimmage. The drive stalled, though, when Dan Arnold dropped a third-down pass at the 16-yard line. The Jags settled for a 40-yard field goal from Matthew Wright — their first field goal of the season — to make it 7-3.

Lawrence then finally exploited Miami’s depleted secondary, launching a perfect pass to Marvin Jones Jr. in the end zone for a 28-yard TD pass with backup cornerback Noah Igbinoghene in coverage to make the score 13-10 with 40 seconds left in the half.

Miami played without starting cornerbacks Xavien Howard and Byron Jones, who were both out injured.