Ben Chilwell has scored in each of his last three Premier League games for Chelsea, as many as he had in his previous 33 appearances in the competition

Ben Chilwell says Chelsea showed the mentality they will need for success this season as they held off an intense late push from Brentford to return to the top of the Premier League.

England left-back Chilwell’s first-half goal – his third in three games for club and country – was enough to win the west London derby, but only thanks to some strong defensive work as the Bees piled on the pressure in the closing stages.

After Liverpool had gone top by thrashing Watford earlier on Saturday, Thomas Tuchel’s side responded in the day’s late game with a mature and dogged display against their promoted hosts.

The European champions dominated the first half but had to dig deep to secure the three points in the first league meeting between the two clubs in 74 years.

“The last 20 minutes, we showed the mentality we need to be showing all season,” Chilwell said.

“It was hell on Earth, the last 20 minutes, but we did pretty well.”

The outcome would have been different had Brentford forward Bryan Mbeumo scored instead of twice hitting the Blues woodwork either side of Chilwell’s winner.

In a frantic final 15 minutes where Brentford threw everything at their opponents, Chelsea keeper Edouard Mendy had to make two important and brave saves, while Blues defender Trevoh Chalobah also cleared off the line.

Senegal international Mendy also tipped over an acrobatic effort from Bees midfielder Christian Norgaard in injury-time, sealing a victory which the Blues keeper celebrated wildly with his team-mates at the final whistle.

“In the end, the last 20 minutes were suddenly a cup game and they had nothing to lose,” said Tuchel.

“They found momentum and it felt like we had one player less. They played with more belief and we focused too much on defending.

“I was happy with the first 65-70 minutes and we should have scored more. But respect to Brentford.”

Brentford 0-1 Chelsea: We needed luck in the end, says Tuchel

The early part of the season saw 24-year-old Chilwell largely limited to a place on the Chelsea bench, with Marcos Alonso’s revival earning him the left-wing-back spot in Tuchel’s Premier League line-up.

Tuchel insisted it was “no great drama” and it always seemed likely a player of Chilwell’s calibre would play his part over the long season.

Chilwell spoke afterwards about the importance of “taking your chance”. Recent form suggests he has done exactly that – scoring in the 3-1 win over Southampton before the international break, then finding the net again in England’s 5-0 victory in Andorra last Saturday.

Preferred once again to Alonso against Brentford, the £50m signing from Leicester continued his rich vein of scoring form with a confident and crisp left-foot strike.

Not only did he score the winner but he was part of a defensive unit which remained firm under pressure despite lacking key players.

Veteran centre-back Thiago Silva was missing after playing for Brazil in a World Cup qualifier against Uruguay about 36 hours previously, while Germany international Antonio Rudiger was also out injured.

That saw 22-year-old Malang Sarr given a league debut in a back three also containing Chalobah, another inexperienced youngster, and Andreas Christensen.

“We have Eddy [Mendy] to thank, he was amazing,” Chilwell said. “He made superb saves and got us the three points in the end.

“I’m happy to get on the scoresheet and happy to score the only goal of the game. But we showed our defensive steel.” 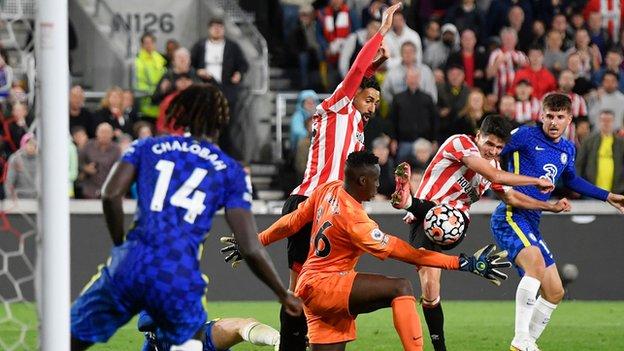 ‘There should have only been one winner’ – Frank

Brentford have impressed fans and pundits alike since winning promotion to the Premier League and came away from this match with lots of credit despite the defeat.

Chilwell’s strike was reward for a first half where Chelsea dominated without creating many clear-cut opportunities.

Brentford lacked aggression on the front foot and struggled to impose themselves in the Chelsea third.

But the Bees considerably improved in the final half an hour and will count themselves unfortunate not to earn at least a point.

A higher intensity allowed the hosts to pose more questions of the makeshift Chelsea defence, with tactical tweaks and substitutions from boss Thomas Frank helping his side press the European champions back.

The statistics laid bare their dominance in the final stages.

While it did not produce an equaliser, it earned Frank’s side a proud ovation from the home fans at the final whistle and keeps them in seventh place after an encouraging start to their debut season in the Premier League.

“If you look over the 90 minutes, there can only be one winner – and that’s us,” said Frank.

“We kept the number one side and European champions to five shots. In the end, we were all over them. They got a lucky win.”

Magnificent Maharaj does it again as dominant Proteas whitewash Bangladesh