It’s been awhile for Sasha Banks and Becky Lynch.

The last time these two member of WWE’s Four Horsewomen clashed in a singles match was two years ago at the Hell in Cell pay-per-view. The two will finally square off again as part of a special two and a half hour “SmackDown” on Friday (8 p.m., FS1). This match comes ahead of Lynch, who returned to the company at SummerSlam after having a baby when Banks was not cleared to compete, defending her SmackDown women’s championship against Banks and Bianca Belair at the Crown Jewel pay-per-view in Saudi Arabia on Oct 21. (12 p.m., Peacock).

Ahead of a big week, “The Boss” took time for some Q&A with The Post’s Joseph Staszewski.

(Edited for clarity and length)

Q: You have been known for making these dramatic returns after some time off. Do you think that’s helped keep things fresh for you with the audience where you get these little breaks and then immediate get thrown into something that feels big?

A: To me it’s not breaks. I’m kind of gone or off TV for one or two weeks. People think it’s like a big break. But you know there’s a lot of talent on the roster. It can’t always be the Sasha Banks show. I can’t be on every Raw and SmackDown, even though I wish I can. I’m a big star outside of the WWE, if you didn’t know. So I’m really booked and busy. If I can’t make the jet on time, I can’t make the jet on time. I can’t just have the plane waiting for me on their hands and feet. I’m just really busy. To me it’s nothing. I’m just showing up to work when I’m booked for work.

Q: What have you thought of this new version of Becky Lynch so far and seeing her balance being a mom and a performer for the last couple weeks?

A: It’s completely so inspiring. To see her come back looking better than she’s ever looked. And to put out a baby and have a six pack, you know she’s coming for everybody’s throat. It just really makes me what to step up my game because I have no idea what it takes to be a mother on the road. They all inspire me so much that they can just do all of this.

Q: You and Becky haven’t had a singles match since 2019. Does that make Friday’s match that much more special for the two of you?

A: I am super excited for Friday because it’s going to be two and a half hours. It’s a supersized show. I think just me and her we have just a beautiful chemistry in the ring like nobody else. Friday, we’re just gonna steal the show like nobody’s ever seen before. I love wrestling Becky Lynch. She’s absolutely one of my favorites. She part of the Four Horsewomen and this Friday’s gonna be no different.

Q: Do you feel like you’re in a place where you just get to be Sasha Banks? There is no heel, there is no babyface. It’s just you.

A: I think that’s any character with WWE.  That’s up to the fans whether they want to cheer or boo me. I’m just being me. I know Becky Lynch is just being herself. Bianca Belair is just being herself, Charlotte Flair. When you’ve been this character, this thing for so long there’s no such thing as a heel or a baby face. You’re just in the eyes of the viewers the legit boss. It’s so cool to get the reception that I get.

Sasha Banks at the 2021 ESPYsGetty Images

Q: What kept you from missing SummerSlam and what were the days leading up to it like when it seemed like maybe you’d be able to go, maybe you wouldn’t?

Q: What would it mean for you to leave Crown Jewel with the SmackDown women’s championship and keep it in the brand?

A: It would mean everything. I can’t let Bianca and Becky, two Raw superstars (after the draft) take my hard work, my SmackDown women’s championship to that show. So I definitely have to make sure that I keep that SmackDown title on ‘Friday Night SmackDown.’ And with Charlotte Flair coming into the mix on SmackDown, it’s definitely going to be a cool little rivalry that we’re gonna have.

Q: You and Charlotte have been on different brands for a while now. It sounds like that’s something you’re looking forward too, to revisiting that rivalry and the chemistry that was so good for so long early on? 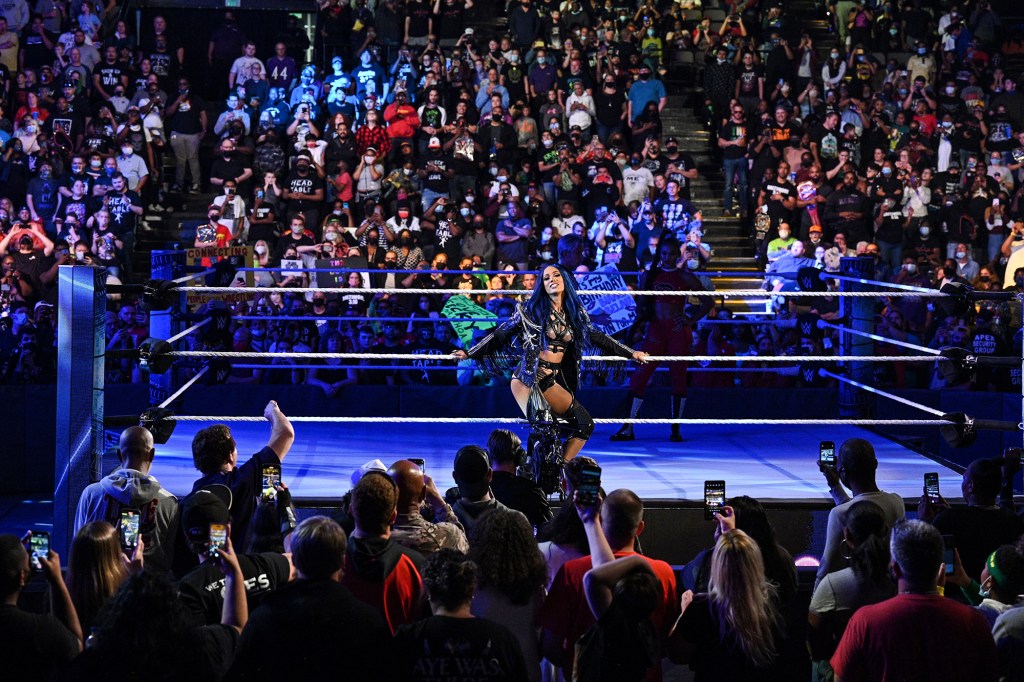 Q: Have you spoken to Bayley lately and if so, how has seen handled being away from everything with her injury?

A: When I speak to Bayley it’s so hard and frustrating because, man, she got hurt (ACL injury) a week before we were going back to the fans. So she’s already telling me she hasn’t wrestled in front of fans for almost two years. Can you imagine that? Can you imagine that feeling? And after someone like her who has absolutely killed the game, is on top of her game right now, just to get taken out like that is so hard to see. Everything happens for a reason. I know she’s gonna come back better than ever. Her mind is more focused than ever and I just can’t wait for her to return.

Q: She doing OK physically now at this point?

A: She is doing incredible. She is the greatest.

Q: You talked about being a big deal outside of WWE. Can we expect you in the Boba Fett series and is there anything else that you’d like to pursue acting wise whether it be a character or a different genre away from a superhero kind of thing?

Q: Is there a particular genre you’d like to do, whether it be a sitcom, a regular drama, that you feel would be a challenge for you?

A: I just finished watching the ‘Squid Games’ and I’m a huge, huge fan of Korean movies. So I would love to be in a show like that just that thriller, drama, really intense show where you really don’t know what’s going to happen. And to be in a Korean movie, that’s always been one of my dreams. I would love to be in a movie one day. It could be any genre. I’m just excited to learn and do it all. I have so much time.

Q: Do you have any predictions for who is going to win the Queens Crown tournament?

A: That is tough. Doudrop just came on the scene. She is looking really impressive. Out of all of those girls I might have to put my money on Shayna Baszler. I think she has a lot to prove and she’s just one of the toughest competitors ever.

Parental Tips for Having Fun on Roblox This Holiday Season