The European Union will urgently provide Ukraine with assistance to “address its financing needs due to the conflict,” President of the European Commission Ursula von der Leyen told journalists on Monday. The Commission plans to allocate an initial €1.2 billion ($1.36 billion) as part of “an emergency macro-financial assistance package,” she announced.

The announcement comes amid heightened tensions in Europe. In recent months, the US and its European allies have been accusing Moscow of planning to invade Ukraine – something the Kremlin has repeatedly denied. The tense situation has led to security talks between Russia, the US, and NATO, which have yielded no results so far, with Moscow’s security proposals rejected by Washington and the alliance.

The EU stands by Ukraine. We are firm in our resolve.I am announcing a new financial assistance package, made of emergency loans and grants, to support Ukraine in the medium and long-term. https://t.co/0PfKt4wtKP

Meanwhile, the US and the UK started delivering “lethal aid” to Ukraine last week as part of an effort to thwart supposed Russian aggression. Almost 100 tons of “lethal aid,” including ammunition intended for “the front line defenders of Ukraine,” were delivered to Ukraine on January 22, the US embassy in Kiev said.

Brussels “counts on” the Council of the European Union, which consists of member states’ ministers, and the European Parliament to swiftly adopt the measure, von der Leyen said, adding that the EU could then “proceed to the rapid disbursement of the first tranche of €600 million” ($679 million). 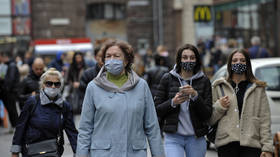 The EU Commission is also set to start working on a second, larger financial assistance package, von der Leyen said, without specifying the sum that might be allocated for Ukraine to support the nation’s “modernization.”

Additionally, Kiev will be allocated €120 million ($136 million) in “bilateral assistance” grants this year, she announced. The EU also plans to invest over €6 billion ($6.8 billion) in Ukraine’s “future” as part of the bloc’s investment plans, she added.

Washington continues to claim that a Russian invasion into Ukraine could happen at any moment. The US also ordered its diplomats’ families to leave Ukraine, while the UK started withdrawing staff from its embassy in Kiev earlier on Monday. The EU has so far said that it sees no reason to follow suit. Moscow continues to call such actions “hysteria.”

Are We In A Bear Market? Glassnode Analyses The Latest Bitcoin Crash

Where to watch LIVE Streaming?

How NASA plans to retire International Space Station by sending it to a watery grave- Technology News, Firstpost

The Style Heroes You’ll Be Wearing All Season Long